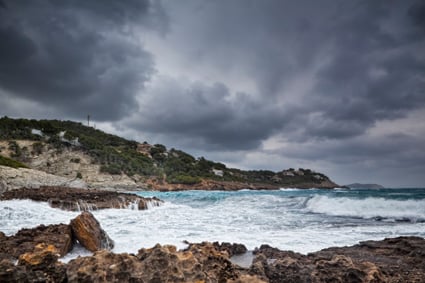 Dear Caleb,
Why is it that Europe does not get tornadoes or hurricanes?
– Gene Segretto

Actually, it is a myth that Europe does not get tornadoes or hurricanes.

Let’s start with hurricanes. Believe it or not, former hurricanes and tropical storms have traversed the Atlantic and crashed ashore in the Europe. But, they are no longer classified as “tropical” in structure by the time they get there. The cold water of the North Atlantic changes them into “extratropical” storms — having lost their warm core tropical characteristics after their long track across the colder waters of the North Atlantic. These are the same storms that daily affect the areas outside of the tropics. There have been several occasions when tropical cyclones that formed in the Caribbean or the Atlantic have gotten caught up in the southwesterly flow on the west side of the Bermuda high and traveled northeast past the Canadian Maritimes, toward the British Isles and Scandinavia.

In late October 1996, the remnants of Hurricane Lili packing winds to 90 mph and producing waves to 35 feet wreaked havoc across portions of England before dissipating over northern Norway on Nov. 1.

Hurricanes and tropical storms need warm water to survive and usually quickly die when they reach the cold North Atlantic. The North Atlantic goes quickly from warm to cold because of the cold Labrador Current between 50° and 55° north latitude — the same general latitude as the British Isles, and slightly farther north than the Canadian Maritime province of Newfoundland. Even though a former tropical storm or hurricane might not be classified as tropical system by the time it reaches Europe, it can still do hurricane-like damage with wind gusts reaching 100 mph or more in a few storms. Some – but not all – of the British Isles’ worst storms were former hurricanes.

As for tornadoes, they have been reported on every continent except Antarctica, which does not have the needed contrast between warm and cold air and also the humid air needed for thunderstorms to form.

Europe has plenty of tornadoes, 300 or more a year, according to a study by Nikolai Dotzek, a scientist with the Institute of Atmospheric Physics in Wessling, Germany. That figure includes roughly 170 observed tornadoes in 25 countries and an educated guess that about 130 others were not reported because they dropped from the sky too briefly to be observed or landed unseen in unpopulated areas of the continent.

Large tornadoes have ravaged Europe in recent years. One smashed its way through Bognor Regis in southern England on Oct. 28, 2000, causing $7 million in damage and injuring four people. Europe’s most destructive tornado tore through the German town of Pforzheim in July 1968, causing $25 million in damage.

As readers and follower’s of the almanac, we are all interested in the weather. If you have about five minutes to spare in the morning and about $30.00 to spare for a rain gauge. Join me and thousands of others accross the US and Canada in CoCoRaHS. A grassroots organazation that collects precipitation data and reports it each morning, via your computer, to our headquarters at Colorado University.
If you think you may be interested, go to CoCoRaHS.org for more information or to sign-up. The only cost is time and the rain gauge and all the training you need is right on the website. Tell them Don KY-BN-9 sent you.

There is a large group of long range forecasters listed on my seasonal report – from England, Norway, Australia and New Zealand. All are well-versed in the ancient methods.

I believe that Hurricane Hazel in 1954 after much devastation in the US went into Canada and then over the Arctic circle and into Europe.