Celebrate Taco Day on October 4th with this take on classic tacos. Each taco, overflowing with spicy vegetables and cheese, is a meal in itself. It is fun to expand the recipe and serve it to a crowd, allowing each person to build his or her own. From The Pumpkin Cookbook.

Heat the oil in a large skillet over medium-high heat. Add the onion and cook for 3 minutes, or until wilted. Add the chicken and peppers, and cook for another 3 minutes. Stir in the fresh and canned pumpkin, tomatoes, chili powder, cumin, hot sauce, and salt. Cover, reduce the heat and simmer until the chicken is tender and no longer pink, the pumpkin is easily pierced with a fork, and the sauce thickens—about 10 to 15 minutes. When the chicken is cool enough to handle, shred it and return it to the pan. Stir in the lime juice and cilantro and let the mixture sit while you heat the tacos.

On a griddle or large skillet over medium heat, warm the tortillas for 1 minute on each side. Place 1 on each of six plates and divide the filling among them. Combine the yogurt and sour cream in a small bowl. Top each taco with the yogurt mixture, cheese, avocado, lettuce, and salsa.

Fold the tortillas in half as you eat them. Makes 6 tacos. 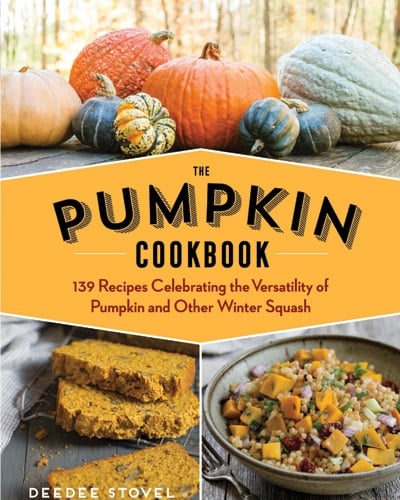 Excerpted from The Pumpkin Cookbook, © by Edith Stovel, photography © by Clare Barboza, used with permission from Storey Publishing.