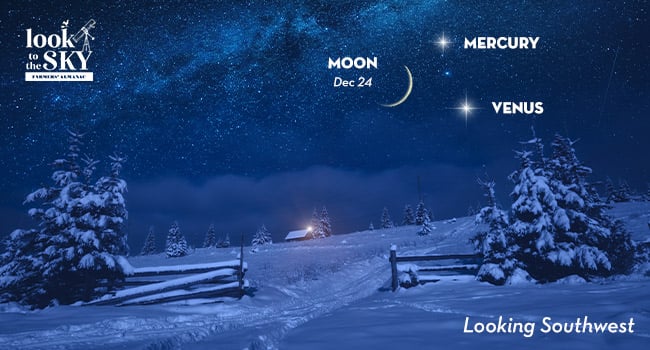 The spectacular sights of December’s night sky may leave you jaw-dropped. Highlights include the best meteor shower of the year, a rare eclipse of the planet Mars, and a special Christmas Eve “Trinity” celestial arrangement!

Have a telescope? This is the best time to get a glimpse of Mars. This month, the red planet shines brighter than Sirius (the brightest star in the sky). It won’t be this bright again for 11 years! By the way … while your telescope is out, don’t miss Saturn. From our perspective on Earth, its rings seem to be closing as the months go by. Plan your stargazing activities this month with our helpful calendar and details below. Tap on the links for more information.

As darkness falls, look for Jupiter a few degrees above the Moon! The best views through a telescope come when the bright planet reaches its highest point in the sky as dusk ends. Look south.

The Full Cold Moon reaches peak illumination at 11:08 p.m. EST. What makes this full Moon extra special? It will make a rendezvous with the planet Mars! Brave the cool temperatures and get outside to watch the Moon “kiss” Mars in this rare event! (See Details below.)

At approximately 11 p.m. EST, the Moon will appear to pass in front of Mars (now shining at its brightest), resulting in an occultation or “eclipse” of the planet! This event will be visible for much of the US and Canada.

The Moon will not cover Mars over parts of the Atlantic Seaboard and the Gulf Coast, but it will come exceeding close. In these locations, Mars will appear as a brilliant amber jewel almost kissing the Moon. This phenomenon is known as an “appulse.” Those who are unaware of this sight might phone the local radio or TV station, but rest assured: This is Mars and not a “UFO!”

Fun fact: When Mars and the Moon come together in the sky, there will be a grand alignment between the Sun, Earth, the Moon, and Mars. (They will be in a row in that order.)

Many people use the phase of the Moon to reflect and set goals for the month, day, or year ahead.

Our new Moon Journal is a beautiful gift for the lunar lover (or writer) on your list!

Related: Moon Deck – Learn more about the how the planets, zodiac signs, and houses relate to each other.

On this night, Mars stands at opposition to the Sun and is visible all night (in excellent observing position at declination +25 degrees). It rises in the east and passes over head by midnight local time.

But the red planet is rapidly departing from the Earth’s vicinity. By New Year’s Eve Mars will be flying away from Earth at 6 miles per second! More accurately, Earth is pulling ahead of Mars in a faster orbit around the Sun.

Mars loses nearly half of its brightness from December 1st through 31st, and shrinks in apparent diameter by about 13%. So don’t miss any opportunities to examine it early in the month.

The Geminid “Gems” Meteor Shower reaches peak activity on the night of Tuesday, December 13 (and into the predawn hours of Wednesday, December 14). We recommend braving the cold to catch a glimpse as these shooting stars are expected to surpass the famous August Perseids!

Under dark-sky conditions, anywhere from 60 to 120 slow, graceful meteors per hour may be seen. They tend to be bright and yellow. The Geminids appear to emanate from the bright star Castor in the constellation of Gemini.

This year, a bright waning gibbous Moon will be in the sky during the shower’s prime viewing hours, which start around 10 p.m. and last until dawn. Strong moonlight may reduce the ability to see some of the fainter meteors.

Mercury emerges as an evening “star” around the 10th, when it sets an hour after the Sun. At magnitude -0.6, it is easily located in binoculars about five degrees to the upper left of Venus. This evening, Mercury stands at greatest elongation, 20 degrees east of the Sun. This is a “fair-to-middling” apparition, for the innermost planet is only 6 degrees above the horizon 45 minutes after Sundown and sets a quarter hour before the end of evening twilight. By the 28th Mercury will have dimmed to magnitude +0.3. It will continue fading at 0.4 magnitude per day until it’s lost to the naked eye.

The Sun reaches the winter solstice at 3:26 p.m. EST, marking the beginning of winter in the Northern Hemisphere and summer in the Southern.

This evening, Venus will team up with Mercury and a slender waxing crescent Moon to form a triangle (See this article’s main image for a rendering). This striking arrangement will appear as a lovely celestial Christmas ornament. Look southwest 30 minutes after sunset (local time) low in the twilight evening sky.

Curious about other famous Christmastime celestial events? Read our article on the “Christmas Star” of December 2020.

The bright “star” hovering about five degrees (the width of three fingers) to the upper left of the Moon this evening is Saturn. It fades to magnitude +0.8 this month, but it still shines more prominently in the south-southwest than the 1st-magnitude star Fomalhaut (lower in the south).

Have a telescope? Be sure to “scope it out” with Saturn this week and next (the first week of January) as its rings are disappearing from view! By the end of January, the rings will collapse from our Earthly perspective and will not be visible again (as we know them) for another five years! Now is the time to get a glimpse! Look towards the southwest horizon at approximately 6 pm local time.

Mercury and Venus are in conjunction this evening. This means that they are closely aligned in the sky. Look for Venus and Mercury faintly shining about one degree above.

The first quarter Moon occurs at 8:20 p.m. EST. Also note: Jupiter wil be about six degrees to the right.

Did you know that you can use the size of your hand to judge distances between objects in space? See our illustration below:

All times and positions for the next 30 days are listed in Eastern Standard Time, 40 degrees north of the equator.

Will you be watching for shooting stars in the December night sky?

How about the dazzling Christmas Eve “Trinity” arrangement? 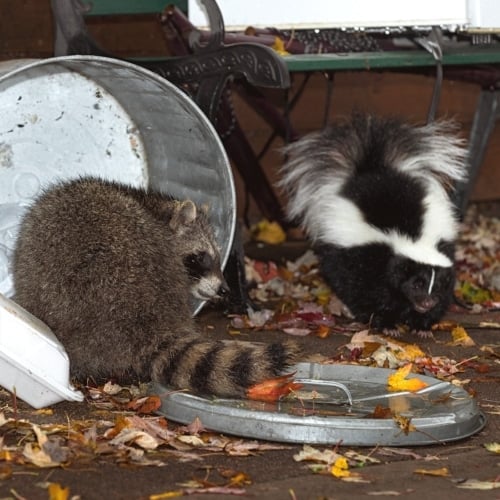