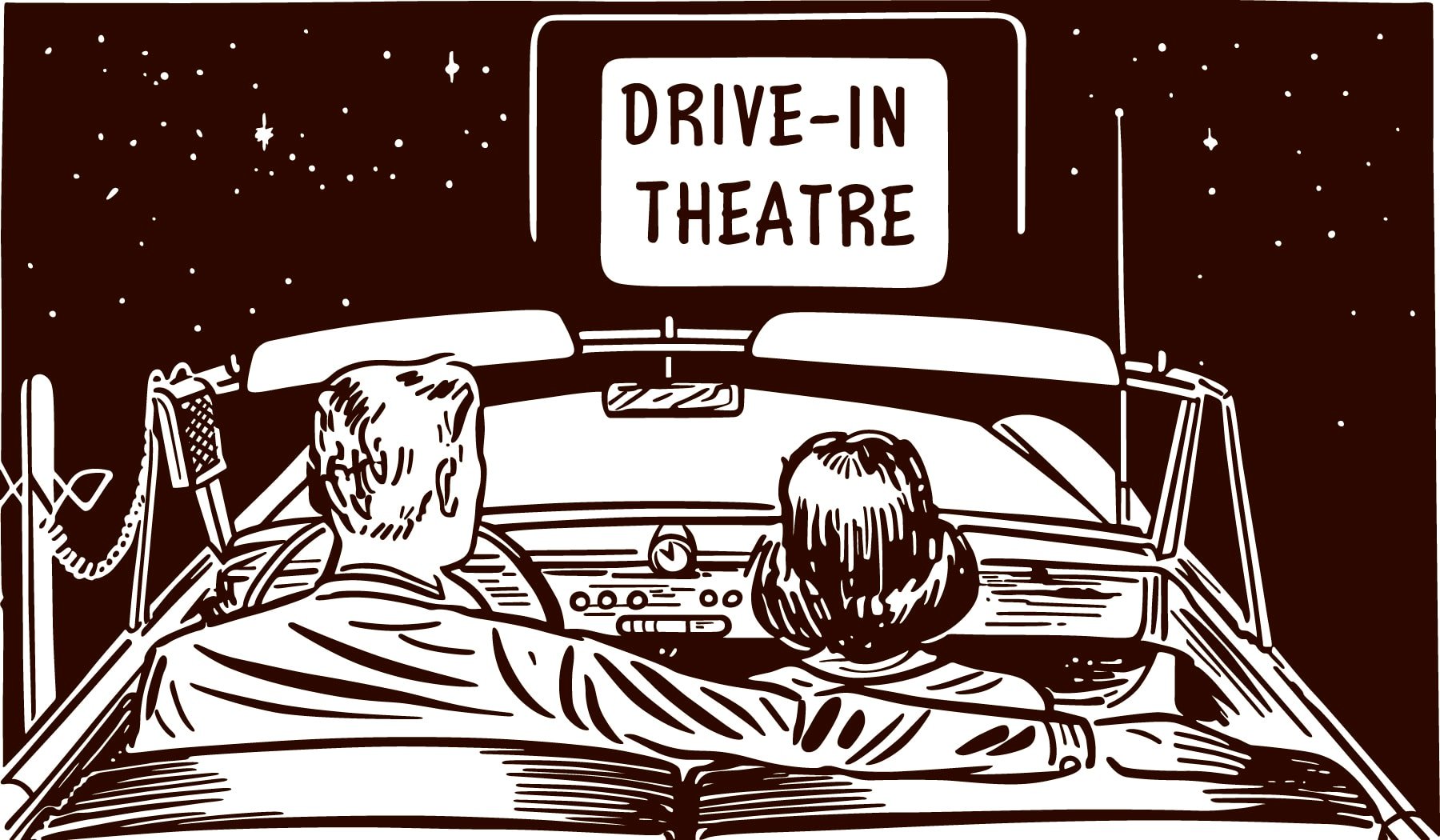 Take acres of available land, mix it with people’s desire for ample personal space, and add to it their love of the automobile, movies, and nearly anything on a grand scale, and what do you have? The elements that coalesced into a largely American phenomenon we know as the drive-in movie theater.

How many still exist? According to Joe Bob Briggs, a film critic, comedian, and drive-in movie expert, by 1956 there were 5,000 drive-ins across America. Post-World War II young couples embraced the chance to get out without having to hire a baby-sitter. Today, in 2020, there are 350 working drive in theaters across the country, a number that has been in a steady decline. But they’ve seen a rise in popularity lately thanks to the coronavirus pandemic, as it’s deemed a socially distant activity. But what does the future look like for drive-ins?

The First Movie Ever Shown at a Drive-In Theater

The drive-in is credited with being the brainchild of a New Jersey man. On June 6, 1933, during the height of the Depression, Richard Hollingshead and his partner, Willis Warren Smith, Jr., decided to take a big risk and opened the first drive-in movie theater in Camden, New Jersey. The screen was 40 feet by 50 feet, and could accommodate 400 cars. The first film shown was Wives Beware.

By 1945, the original patent obtained by Hollingshead was declared void, and drive-ins began to spring up on both coasts.

Originally, these theaters had giant speakers on either side of the screen. The sound was slightly delayed and car windows had to be wide open. But in 1946 the sound available at movies was greatly improved by the invention of the speaker pole, which allowed movie magic sound to be piped directly into a vehicle via a speaker that hung on the car window.

By 1972, the invention of piping the sound through the car radio had arrived; however, by this time, the number of drive-ins was already in decline.

“You’ve also got to realize most drive-ins sit on ten to fifteen acres of land. If you were on the edge of the city or town in the fifties, you might just be sitting on prime development land now,” states John Tevanian, owner of the Bridgton Twin Drive-In Theater in Bridgton, Maine. The offers just become too lucrative to back away from.”

Tevanian knows from experience; two of his family-owned-and-operated drive-ins in Maine have been demolished, one to make way for condominiums.

Drive-ins were and are predominately an American phenomenon. In Japan, because of the scarcity of land, they have their own version: portable screens that can be rolled out at night to make use of empty parking lots. Drive-ins were unheard of in Europe because of a lack of available land but they do exist. In fact today, some venues in Germany are booming since the pandemic.

The appeal of drive-ins is that they usually offer a good value, reasonable entrance fees, and sometimes the famed “double feature.” They still provide families an affordable, comfortable night out without the added burden of finding and paying for a sitter or worrying if the toddler’s antics are bothering those nearby.

As Tevanian says. “You can get up and stretch if you want to. You don’t have to worry about what to do with your coat, or the guy behind you who is talking. You can relax, look up at the stars and enjoy yourself”

And then there is the increasingly rare opportunity to experience the thrill of viewing a motion picture on an enormous screen.

A Bit of Nostalgia

For those of us who remember being piled in the back of the station wagon, drive-ins provide a sense of connection to a time when the world was exciting, but safe. When we felt confident we knew the good guys from the bad.

So, get out there and enjoy a drive-in while you still can, before they exist only in coffee table pictorials.

We still enjoy the Van Buren Drivein in Riverside CA!

This was very interesting, what a trip down memory lane..

But wait they are building a new drive-in-theater in a big field in Douglas County, Nebraska. Here is a link to the article in the Omaha World Herald in late
May, 2020. It is called the Quasar Drive In on Highway 36.

Ooh nice! Will you go once it’s open? We may have to take an Almanac road trip.

I LOVED going to the drive-in! We have one about 20 minutes from us on State Route 59 in Kent, Ohio. They have 2 screens that were replaced for a better picture. Listen through your radio. Me and hubby want to go, but now have to take a Nap b-4 we go to make sure we Don’t Fall Asleep!! Can’t wait til it opens!