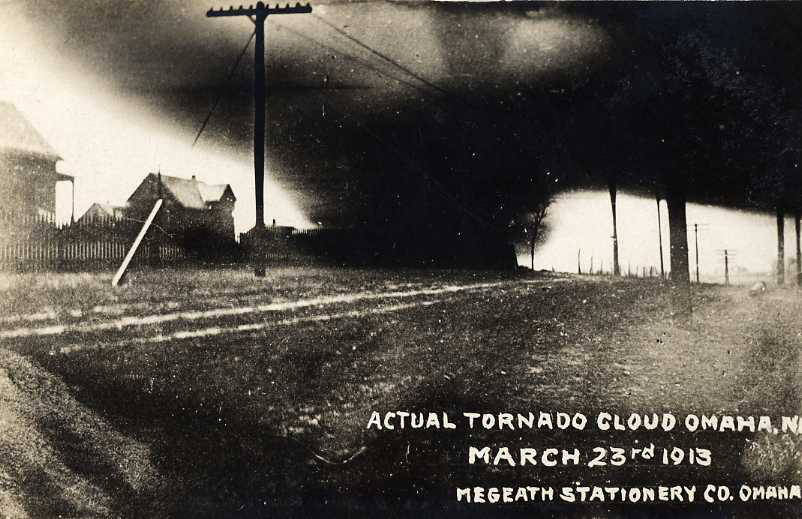 On a gloomy Sunday afternoon over a century ago, residents of the Midwest sat down to their Easter dinner and were blown away by more than just the food.

On March 23, 1913, when a violent Easter tornado outbreak swept through the Great Plains without warning, destroying everything in sight and killing at least 190 people and injuring hundreds of others. Beginning at 5:20 p.m., a series of F4 tornadoes touched down in Nebraska, Iowa, Missouri, and Indiana.

The outbreak followed on the heels of another series of tornadoes that had hit during the preceding couple of days, making for an exceptionally frightening and deadly weekend.

The deadliest of the group was a quarter of a mile wide, and passed through Omaha, Nebraska, at 6 p.m., killing 94 people in that city alone. The storm destroyed much of the northern end of the city, cutting a path through town more than five blocks wide. The storm reduced both slums and mansions alike to rubble, cutting some buildings neatly in half as it passed through. One fast-thinking streetcar driver managed to outrun the storm, saving the lives of his passengers.

The Easter tornado that hit Omaha was the 13th deadliest in the recorded history of the United States, and the deadliest to hit Nebraska. In addition, the outbreak as a whole remains the most deadly outbreak to strike so early in the year.

During the outbreak, more than 2,000 homes were destroyed in Omaha alone, causing more than $8 million total damage. The plight of those left homeless by the storm was worsened by the fact that extremely cold weather followed on its heels, bringing snow and punishing winds.

One result of the outbreak was an attempt to engineer tornado-proof buildings. The 14-story First National Bank of Omaha, built in 1916, represented one such attempt. Architect’s hoped its unique “U”-shape would protect it from future destruction.

Be prepared for tornado season…

I love this
Rate this 5 stars people

global warming is a hoax

Global warming wasn’t invented until D.Q. crawled out from under his rock…

1913, 100 years ago, March 25, was also the anniversery off the 1913 flood in Dayton, Ohio. My grandmother lived at that time and live in downtown dayton……can you give us some statics on that?

Those poor souls had no way of knowing that those twisters were coming. Thank God for the technology we now have that allows us some lead time to take cover~

I reckon this must have been the start of global warming.

Choose your desired pasta and place one cup (or more, if desired) in zip top bag. Add about 1/4 cup rubbing alcohol and 10 drops of food coloring, eliminate air, seal bag tightly, shake, and lay flat. Allow mixture to fully saturate pasta. The longer it sits, the more defined the color. Carefully remove and place on paper towels atop foil or a cookie sheet (so excess dye does not stain countertops) until dry, preferably overnight. Store in jars or other protective means to prevent breakage.
More hints & tips