September’s full Moon is coming up, the so-called “Harvest Moon,” which is the full Moon nearest to the autumnal equinox (September 23rd). The arrival of this year’s Harvest Moon will depend on which time zone you happen to live in. If you live in the Eastern Time Zone, the moment the Moon turns full will occur just after midnight—at 12:33 a.m. on Saturday, the 14th. But if you live elsewhere in the country—in the Central, Mountain, or Pacific time zones—the moment that the Moon turns full comes before midnight on Friday, the 13th!

Split Time Zone Full Moon: How Often Does This Happen?

Interestingly, the last time this happened—June 13, 2014—it was the reverse of what will happen this month. It was a Friday the 13th full Moon solely for the Eastern Time Zone, with the Moon turning full just after midnight; for the rest of the country, the full Moon was the day before, on Thursday, the 12th. Nationwide we haven’t had a Friday the 13th full Moon since October 13th, 2000, and it won’t happen again until August 13th, 2049!

It has been calculated that to have a full Moon occur on the 13th day of a particular month, and for that day to be a Friday, it is (on average) a once in 20-year occurrence!

Why The Harvest Moon is Unique

What sets this upcoming full Moon apart from the others is that farmers, at the peak of the current harvest season, can work late into the night by this Moon’s light. The Moon rises about the time the Sun sets, but more importantly, at this time of year, instead of rising its normal average 50 minutes later each day, the Moon seems to rise at nearly the same time each night leading up to when it’s full. For example, between September 12th and 14th, the rising of the Moon comes, on average, less than 27 minutes later each night, thus providing light for the farmer to continue gathering crops, even after the Sun has set.

Watch our video on the Harvest Moon here.

The reason for this seasonal circumstance is that at this time of the year, the path of the Moon through the sky is as close to being along the horizon as it can get. Thus, from night to night the Moon moves more horizontally than vertically and thus rises sooner from one night to the next.

To add to this full Moon “madness,” this upcoming full Moon very nearly coincides with apogee—that point in its orbit which places it at its greatest distance from the Earth: 252,100 miles away. Remember last February, when the full Moon coincided with perigee, its closest point to Earth? The Moon was more than 30,000 miles closer and was accordingly branded a “Supermoon.”

But this month’s full Moon will appear about 14 percent smaller, leading some to call it a “Micro” Moon.

It is almost certain that many will claim that this year’s full Harvest Moon indeed appears to be smaller than usual. But the truth of the matter is, that without knowing in advance whether a full Moon of a given month might be branded either “Super” or “Micro,” the appearance of our natural satellite to most really doesn’t look all that much different.

Here’s hoping for clear skies so you can get outside an enjoy it!

Hi JanattheRanch: the rise and set times of the Moon are a bit different from when the Moon turns 100% astronomically full. Our calculations indicate 9:33 p.m. for Susan’s time zone, but she is seeing it listed as 9:32 p.m. elsewhere.

On hot days, keep your iced coffee from getting watered down from melting ice. Simply fill an ice cube tray with leftover coffee, then pop it in the freezer to chill for 3 to 4 hours. Store the coffee ice cubes in a large freezer bag or keep them in the tray and add them to your drink as needed, to keep the first sip as rich-tasting as the last!
More hints & tips 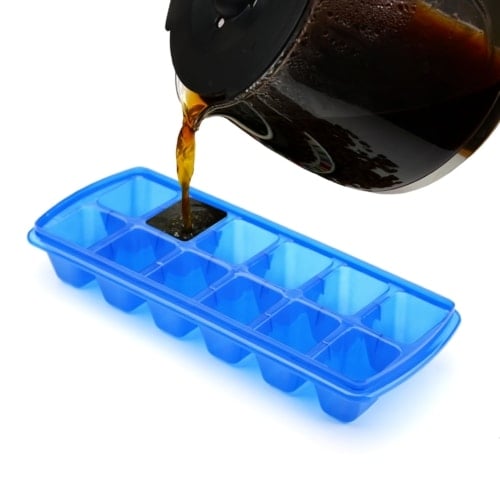