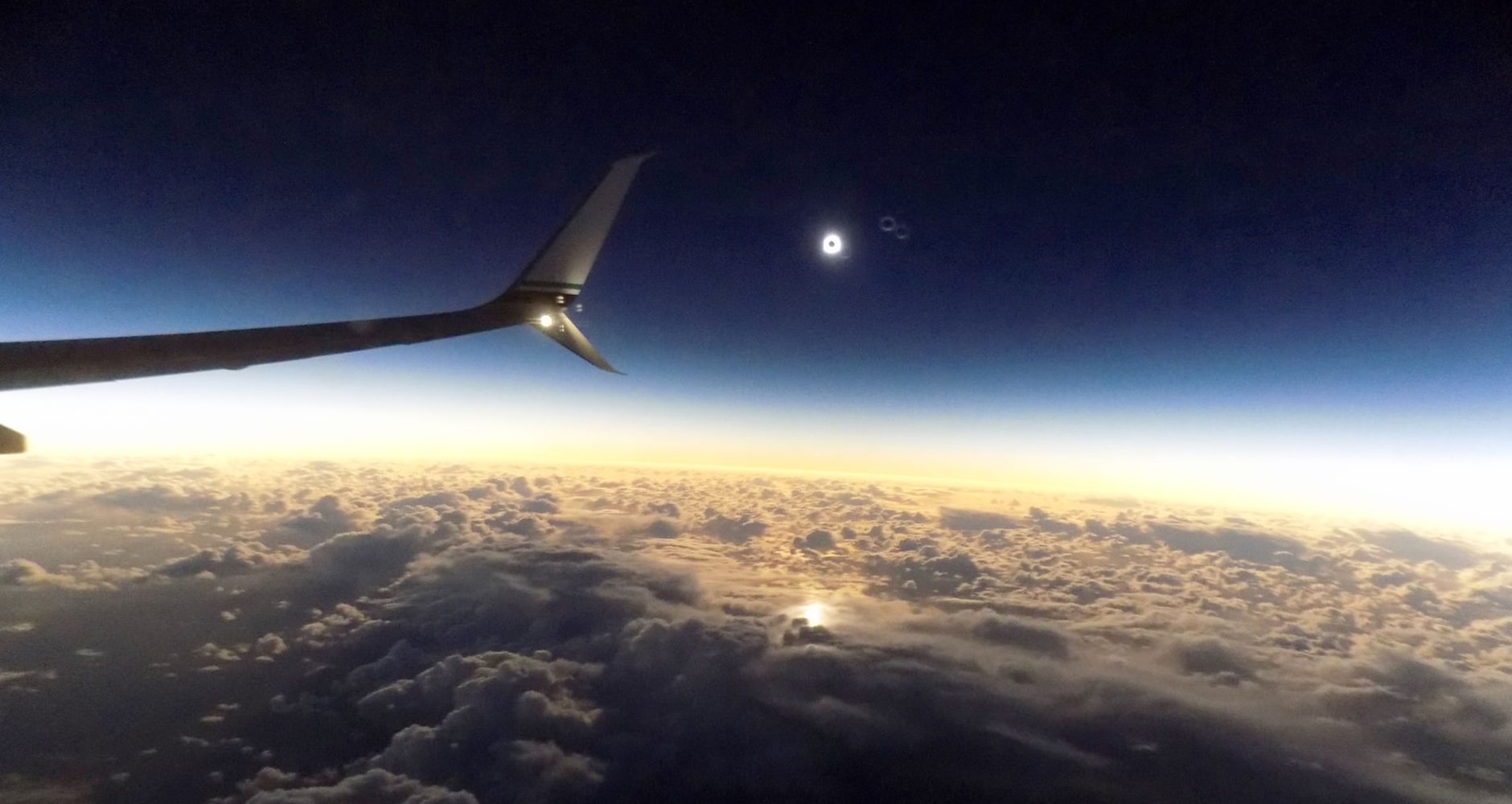 Getting an Airline to Change its Flight Plan

Back in early March through the news media, you might have heard about a little escapade that I had arranged with a major commercial air carrier. Unlike most airline passengers, you might say that I was “over the Moon” when my scheduled flight was delayed – which makes sense, since I was the one who orchestrated the holdup in the first place!

All during the spring and summer of 2015, I tried to convince/coerce/cajole Alaska Airlines to change the takeoff time of its Flight 870 – which flies non-stop from Anchorage, Alaska, to Honolulu, Hawaii, – so the aircraft, a 737-800, would rendezvous with the Moon’s dark umbral shadow over the North Pacific Ocean.

Such a circumstance would allow the passengers and flight crew the opportunity to witness nature’s greatest sky show, a total eclipse of the Sun. I started my campaign in March 2015, after I had returned from successfully observing a total eclipse of the Sun from an aircraft flying over the Faroe Islands near the Arctic Circle. I knew that the next total eclipse scheduled for March 8th of this year would sweep across Indonesia. But I also took note that the end of the narrow path of totality was going to pass less than 700 miles north of Hawaii. Could it be possible, I thought, that some commercial airline might have a flight in the same vicinity when the Moon’s shadow would be sweeping by? That’s when my search began. And that’s when I discovered Alaska Airlines Flight 870.

But there was a catch. That particular flight would encounter the total eclipse, but according to my calculations, only if it were changed to depart 25 minutes later than planned. That’s when I started emailing the corporate hierarchy at Alaska Airlines, alerting them to the total solar eclipse and pitching the idea of changing the flight itinerary to intercept it. One email isn’t enough to change the mind of a Fortune 500 company, though. So I just made a pest of myself, continuing to call and email them through the spring and summer of 2015. Finally, after half a year of back-and-forth emails and phone calls, Alaska Airlines agreed in September 2015 to delay Flight 870 on March 8th for the eclipse.

“We recognize our customer’s passions,” Chase Craig, Alaska’s director of onboard brand experience, said in a release. “Certainly we can’t change flight plans for every interest, but this was a special moment, so we thought it was worth it.” Once the word got out that the attempt would be made to intercept the eclipse, about a dozen other astronomy enthusiasts from different parts of the country also booked window seats for the flight. One veteran eclipse chaser brought special protective glasses to distribute both to the passengers and crew so that everyone could safely view the partial stages of the eclipse. I distributed material on board explaining to everyone what to expect.

This was my eleventh total eclipse and the fourth one I’ve seen from an aircraft. There are, of course, major perks to seeing an eclipse from cruising altitude. For one thing, you’re above the clouds. If you’re on the ground and there’s a cloud in front of the Sun during totality (which unfortunately happened to me in Colombia in 1977), you’re not going to see the eclipse. You also get a chance to see the Moon’s shadow sweeping across the landscape. At 37,000 feet, and believe me, that’s a dramatic flight to see.

The flight turned out to be a great success. In fact, at the last minute, the airline switched to a larger aircraft (a 737-900), in part to accommodate a camera crew from an ABC-TV affiliate who videoed the spectacle for “Good Morning America.” We saw 113 seconds of totality; a sight that will be long remembered in the hearts of those who were fortunate to be onboard.

And next year, on Monday, August 21, 2017, for the first time in nearly a century, the narrow path of another total solar eclipse will go from coast-to-coast across the contiguous U.S., from Oregon to South Carolina. Approximately 12 million people fortuitously live in the eclipse path and roughly 200 million people are within a day’s drive of experiencing the amazing panoply of phenomena leasing up to that magic word: Totality! Mark your calendars and be sure to check out our feature article in the 2017 Farmers’ Almanac.

Love natural peanut and other nut butters, but don’t like when the oil separates? Simply stir it once and then store the jar in the refrigerator. The nut butter will stay combined and it will keep fresher longer.
More hints & tips