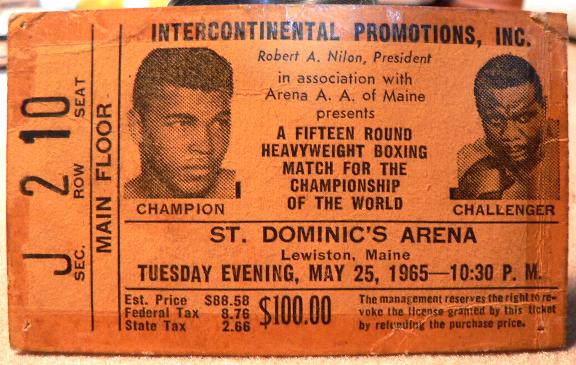 I’d like to think that Lewiston, Maine is known for many great things. After all, it is home to the Farmers’ Almanac. But, if you are sports-minded, May 25, 1965 goes down in history as the most memorable heavyweight boxing match of all time.

A rather young, cocky, and over- confident boxer named Cassius Clay had upset champion Sonny Liston in Miami in February, 1964. A rematch was planned to be held at the Garden in Boston the following year.

But at the 11th and a half hour (only 18 days before), the fight had to be moved. Maine boxing Promoter Sam Michaels jumped at the opportunity and brought the event to Lewiston, to a rather dated-looking hockey arena that seated about 4,000 hardcore fans. Tickets ranged from $20 – $100.   There were only 2 hotels in the area to accommodate the fighters. So, Liston trained at the Poland Spring Inn, and Ali set up house at the Holiday Inn in Auburn. It was the talk of the town and the country. My gosh – celebrities were everywhere!

So on May 25, 1965, the famous rematch was taking place in our hockey arena. The thinking was that Liston’s earlier loss was a fluke in Miami and this would be a battle to the end.

I had just turned 14 and my Dad brought my older brother, Gene, to the fight. My mother and I dropped them off and planned to come back long after the battle was over. Sitting in the nosebleed section, they got securely in their seats. Actually, the fight started and my Dad turned to put his coat over the chair when POW!  It was over. The phantom punch had already been unleashed and neither Ray Geiger, Sonny Liston, nor anyone else, ever saw it coming.

When my mother and I got back to our house, the phone rang, and back we went to pick up two of the many stunned fans.

I have repeatedly interrogated my brother about the fight. At first, he said, “yeah, I saw it clearly,” but the years have dimmed his memory a bit. He said he arrived, sat down, heard the bell, and it was over. Did Gene really see it?  We had heard about a man who traveled all the way from Australia to watch the fight. He arrived a few minutes late and missed the whole thing.

So, on this anniversary of the infamous Clay-Liston fight, I salute my community for hosting an event that remains known for the “phantom punch,” which put us on the map, and 50 years later, we are still here.

A photo of Clay (Ali) scowling over a prostrate Liston hangs proudly in our beloved arena.

See the in-depth feature published by the Lewiston Sun Journal, complete with photos as well as the audio and television broadcast from the night of the fight here!

Use a thermos or insulated coffee carafe to keep Thanksgiving gravy warm while you put the final touches on the meal. This frees up much-needed space on the stove. Then simply pour it into a gravy boat and serve.
More hints & tips 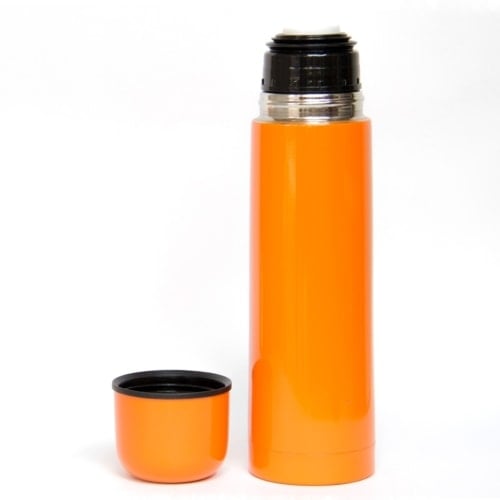