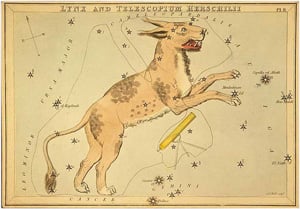 Lynx is one of the dimmest, and lesser known, constellations in the night sky. It is one of 88 official modern constellations, and one of the 40 that is not of ancient origin. Lynx was introduced in the 17th century by Polish astronomer Johannes Hevelius.

It was named for the lynx, a type of wildcat native to Eurasia and North America. The bobcat and Canada lynx are both members of the lynx family. The constellation sits in the northern sky bordered by Ursa Major, Camelopardalis, Auriga, Gemini, Cancer, Leo, and Leo Minor.

It contains 42 stars, the brightest of which form a zigzagging line often depicted as the cat’s back. Only one star is named: Alsciaukat, also known as 31 Lyncis, or kappa Lyncis. Its brightest star is alpha lyncis, a third magnitude star located about 220 light-years from Earth.

Because it is a modern constellation, Lynx has no role in classical mythology, though there is folklore surrounding the animal. Lynxes were once held to be keepers of secret wisdom. During the middle ages, they were also closely associated with the semi-precious stone known today as the garnet. It was once believed that the stone was formed from lynx urine covered in dirt for several days. A wily treasure hunter could find this valuable gem by tracking a lynx and watching it.

Decorate your beach umbrella with painted handprints and art. This will help kids (and adults) find the right umbrella to go to.
More hints & tips