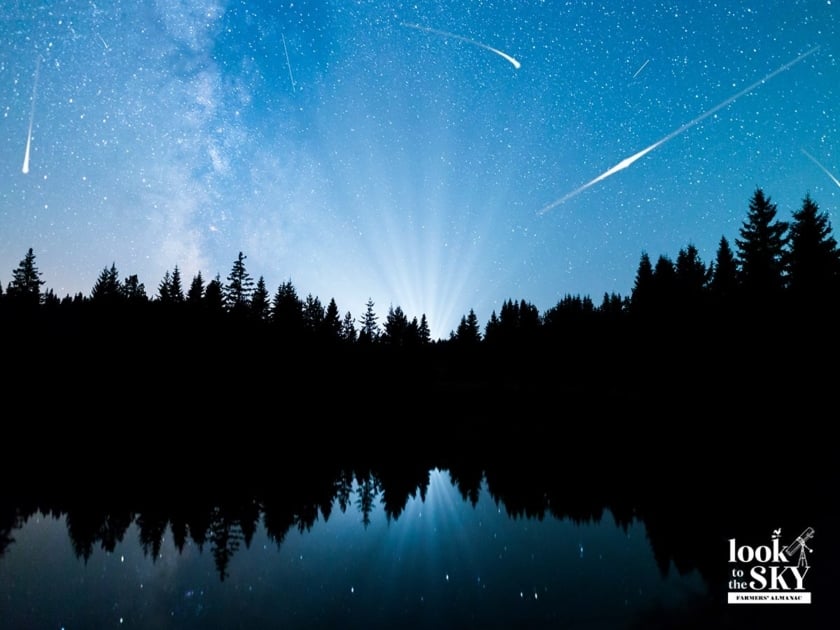 May’s night sky will be filled with exciting things to see including Venus and Jupiter shining brightly together. There’s a total lunary eclipse mid-month and a possible new meteor shower toward the end of the month!

Bookmark this page so you can easily refer to it over the next few weeks. And if you’re interested in locating particular planets in the sky throughout the year, be sure to consult our visible planets guide. Also click on any of the links below to learn more!

May 1 — Venus, Jupiter, And Mercury

At dawn, Venus and Jupiter mimic a dazzling “double planet” low in the eastern sky. A half hour before sunrise, they will be about 12° above the eastern horizon. In the mornings that follow, Jupiter will pull away from Venus, ascending toward the west and by month’s end the big planet will be coming up at about two thirty in the morning. (Venus, meanwhile, will continue to rise as dawn breaks, all the way through August.)

In the evening, a few minutes after twilight ends, look west-northwest for Mercury. It is easily found at about 12° to the lower right of an orange star, Aldebaran (in the constellation of Taurus). Binoculars or a wide-field telescope will reveal the pretty sight of the Pleiades star cluster, which is centered about 2° to the right of Mercury.

In the evening, the slender sliver of the two-day old waxing Moon (4% illuminated) will join the array (see above), sitting 4° to Mercury’s upper left. Telescopically, the planet appears about one-fourth illuminated and in the days that follow, as its crescent phase thins, Mercury appears to fade away.

The swift Eta Aquarid meteors, which seem to radiate from the water jar of Aquarius, are predicted to reach their peak this morning. They are usually most visible to Southern Hemisphere observers, where rates can exceed 40 per hour. But hourly rates vary strongly with latitude. Observers in the tropics may see 20 meteors per hour under ideal conditions, while at more northerly latitudes the rates could be half that or less. Its meteors are swift and often leave a long-lasting train. Concentrate on that area of the sky toward east after 3 a.m. The Eta Aquarids, like the Orionids in October, are believed to be associated with Halley’s comet.

The Moon will pass several degrees above the blue star Regulus, which marks the heart of Leo (the lion).

The Moon will be several degrees above the blue star Spica, the brightest star in the constellation Virgo (the virgin).

The Full Flower Moon will pass completely into the Earth’s shadow, causing a total lunar eclipse. (This only happens approximately every two and half years.) This full Moon is known as a “supermoon” because it comes the closest to the Earth in its orbit—otherwise known as “perigee.”

May 18 – Mars with Neptune (rare sighting)

Mars rises about 30 minutes before the first light of dawn in May, as it has done every morning since the beginning of 2022. Mars has doubled in brightness since then, however, and has traveled eastward all the way from Ophiuchus through Sagittarius and Capricornus into Aquarius. But the red planet still isn’t much to look at in a telescope. It’s a gibbous ball that even in moderately large telescopes appears as nothing more than an orange speck.

On this morning, the red planet will be passing less than 1° south of Neptune, providing a good opportunity to identify the most distant of the solar system’s eight planets. With large binoculars or a telescope, Neptune will appear as a tiny bluish “star” only about 1/700 as bright as Mars.

Look southeast before dawn to see Saturn, a bright yellow-white star, shining about 5° above the moon. Also, today, Mercury passes through inferior conjunction between the sun and Earth and enters the morning sky.

May 25 – Jupiter And Mars With The Moon

The Moon will sit about 5° to the lower left of Jupiter, and Jupiter in turn will be about 2° to the left (east) of Mars. Optimal viewing is 45 minutes to one hour before sunrise when they will be stretched low above the east-southeast horizon.

May 27 – Venus Kissing The Crescent Moon

The crescent Moon will be 3½° to the lower left of Venus this morning.

This morning, Mars and Jupiter are in conjunction with Mars passing less than 1° below Jupiter.

Late tonight, skywatchers will be on alert for a possible new meteor shower, as the Earth passes through debris that was shed by the tiny comet Schwassmann-Wachmann-3. In 1995, astronomers were surprised to see the nucleus of this comet break up into four separate pieces, releasing a cloud of dusty material into space. The amount of dusty material the Earth may encounter is unknown. If there is a thick concentration, however, we may be treated to brief meteor outburst, resulting in many dozens, if not possibly even hundreds of “shooting stars” during the course of an hour’s watch. The time to look is 10 p.m. PDT in the Western US, or in the Eastern US, 1 a.m. EDT on May 31st. More details can be found on page 104 of the 2022 Farmers’ Almanac.