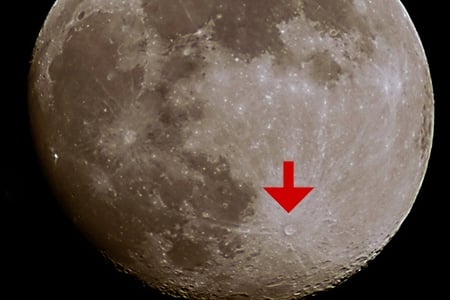 Whenever there’s a full Moon, things get very exciting around here. And it’s obviously the same for our readers and Facebook fans, too — when the Moon is full, the stunning photos come pouring in from all over the world. The monthly event lures both novice and professional astronomers alike to stop and take notice.

It’s hard to not be awestruck by the crater-pocked orb in the night sky, especially when it’s full. The Moon is unlike Earth in every way, and telescopes and other devices that give us a closer glimpse of its craggy, silent surface further pique our fascination and fuel intrigue.

We know the Moon’s surface is full of craters, but one in particular gets a lot of attention in photos – the Tycho crater, named after the 16th century Danish astronomer, Tycho Brahe (1546–1601), who was revered for his precise planetary observations even before the invention of the telescope. The Tycho crater sits at the southern polar region of the Moon, and looks like a round “naval” with streaks emanating from it, causing some to say the Moon looks more like a melon than a celestial body.

Astronomers estimate that the Tycho crater is fairly young, created by the impact of a significant planetary object that was probably about 6 miles wide, which struck the Moon some 108 million years ago. And it is very likely the dinosaurs and other creatures inhabiting Earth at the time were witness to this event and experienced a pelting of debris falling to Earth some days following the impact.

When viewing images of the Tycho crater, it appears to be simply a round crater, like so many others on the Moon, but upon closer inspection, there is a visible dot punctuating the center of the crater. What this “dot” is may surprise you. Nestled inside the Tycho crater is a mountainous peak, which, according to NASA, is about 9.3 miles (15 km) wide and 1.24 miles (2 km) at its highest point. Hardly a dot at all. Powerful telescopes have captured many images of this peak, and have been able to zoom in further to discover that sitting atop the peak is a boulder roughly 400 feet (122 meters) wide. That translates into something the size of 1.3 football fields.

The next time you point your telescope to the sky, rather than search for the “Man in the Moon,” take a closer look at the Tycho crater.

Enjoy this fun and fascinating flyover of the Tycho crater !

Some would say it is presence of a near earth impact. With the results leaving formations of powerful arc events caused by intense electrical interactions.

I watched the movie 2 times. I did not see any rock balanced on the top of the peak. Did the Japanese actually fly a satellite over this area at 100 km above the moon’s surface? Is that what we are seeing? If so, it looks to me that “someone” was running a mining operation on the moon and that is what created this crater. I saw many concentric circles and terraced tiers similar to large open pit iron ore and gold mines on Earth. There also appears to be tracks of equipment on the floor and the tiers of the crater. Since there is no atmosphere to explain erosion what other alternatives do we have to consider? The real question is “Who” or “What” was doing the mining and “Why”?

This particular flyover does not show the large boulder. We thought it was very interesting to show the crater in 3D. You can view the boulder here: http://boingboing.net/2011/07/01/close-up-of-a-moon-c.html

I just watched you 3-D online movie of Tycho. Very impressive. I will be turning my telescope on Tycho when the moon starts waxing again.

You are correct Dean, our apologies. We have since corrected the story.