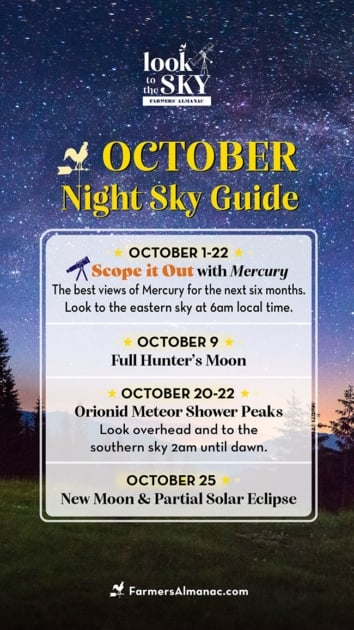 The October sky will have many celestial highlights including: the best view of Mercury for the next six months, the Full Hunter’s Moon, and the Orionid Meteor Shower. There will also be a partial solar eclipse (which won’t be visible to those in the US, but our friends in the UK and other parts of the world may catch a glimpse. See details below.)

October’s Night Sky Guide (October 2022) is written by the esteemed astronomer Joe Rao, who serves as an associate lecturer at the Hayden Planetarium in New York City. Mr. Rao regularly contributes to the Farmers’ Almanac, Sky & Telescope Magazine, and Space.com. Read on!

For explanations of degrees (length in space) and magnitudes (brightness of stars) consult our “handy” chart and footnote at the bottom of this page.

For most of the month, be sure sure to look eastward at approximately 6 a.m. local time to catch the best sight of Mercury. (It won’t be this good for another six months!) The planet is usually so close to the Sun that it is washed out by its brightness.) The next time Mercury will be this easy to see will be in April 2023.

Saturn appears just to the upper right of the Moon this evening. The ringed world is an easy and obvious sight in the evening sky. A bright yellow-white starlike object in the southeast at nightfall and in the south during the mid-to-late evening.

Saturn shines much brighter than the 1st-magnitude bluish-white star Fomalhaut, which sparkles 20 degrees to the lower left. Its rings are 15 degrees open—the most open they will be until 2027.

Around 8 p.m. local time this week, we will see the Great Square of Pegasus standing on one corner in the east while the brilliant orange star Arcturus smolders low in the west. This is a sign that the sky is in transition.

Although many of the striking star groups of summer remain with us (still hanging in the western sky), the yellowish-white glow of the star Capella ascending in the northeast is a promise of still more luminaries to come.

In just a couple of months, Orion will dominate the skies of winter as well as the brilliant planet, Mars.

Looking toward the southern sky these evenings, we can still see the dim stars of the constellation of Aquarius. This zodiacal group traditionally represents a man holding a water jar, which is spilling a vaguely marked stream of water southward into the mouth of Piscis Austrinus, the Southern Fish.

Mercury stands at greatest western elongation this morning. Although only 18 degrees from the Sun, the planet at magnitude -0.4 rises shortly before the beginning of astronomical twilight, making this the year’s most favorable morning apparition for observers in mid-northern latitudes. Mercury should be easily visible to the unaided eye for the first three weeks of October (as noted above). During this interval, Mercury rises nearly due east and brightens from magnitude -0.4 to -1.

Later this evening, another planet–Jupiter–will appear to lead the almost-full Moon across the sky. It will be about 5 degrees to the right of the Moon (west). The big planet shines low in the east in evening twilight, climbing higher each week.

After dark, the king of planets dominates the sky all night long, blazing at magnitude -2.9. Jupiter transits the meridian (reaching its highest due south) in late evening, so that’s the best time for telescopic observations. The planet’s size appears to shrink slightly this month, but it’s still bigger than it has appeared in the last few years. Jupiter sets during morning twilight during the first half of October and around 4:15 a.m. at month’s end.

The Full Hunter’s Moon will reach its peak illumination at 4:55 EDT p.m. The bright “star” nearby is the planet Jupiter! Learn more about the Hunter’s Moon in the video below:

October 14 – Mars And The Moon In October’s Sky

As the waning gibbous Moon rises late this evening, Mars, shining with a brilliant fiery orange light, will be visible about 3 degrees to the lower right. Mars is the planetary superstar this fall, but we still have to wait up a bit for it. It rises well north of east around 10 p.m. local daylight time at the beginning of October and gets 30 degrees up, high enough for excellent observing, around 1 a.m. But at the end of the month, it rises at around 8:25 p.m. and is 30 degrees up by about 11:15 p.m. local daylight time.

Throughout October the red planet is positioned between the horns of Taurus the Bull about 10 degrees to 15 degrees to the northeast of Aldebaran, which it greatly outshines, with the Pleiades looking on. This month, as the distance from Mars decreases from 73 to 58 million miles, it nearly doubles in brightness from magnitude -0.6 to -1.2, as we hurtle toward it at an average speed of 5.5 miles per second.

The swift Orionid meteors are predicted to reach maximum activity during the predawn hours on October 21. Best viewing is at around 2 a.m. local time (until the first light of dawn). Look overhead and toward the south-southeast (where Orion will be).  In order to avoid getting chilled and a stiff neck, lie down on a long lawn chair wrapped in a  blanket. Having a thermos jug of a hot beverage and a snack will also help—especially if you plan to be outside for a long time.

But bear in mind that a fat, waning crescent Moon high in the sky will somewhat hinder views of the fainter streaks. If the sky were fully dark, about 15 to 20 meteors per hour would be visible emanating from the club of Orion (just north of Betelgeuse).

You may also consider looking for the Orionids around the time of new Moon, when skies will be darker. (See below.) But it is also important to note that the shower will decrease in intensity as days go by.

The Orionid Meteor Shower is one of the two showers associated with Halley’s Comet (the other is the Eta Aquarids in early May).

Venus starts this month rising a half hour before the Sun. The planet quickly becomes lost from view in the solar glare, passing through superior conjunction about one degree north of the Sun today.

The new Moon is at 6:49 a.m. A partial eclipse of the Sun will also take place today. To produce this eclipse, the Moon’s shadow falls chiefly on the north polar regions of Earth. It will be visible from an eastern slice of Greenland and all of Iceland, as well as most of Europe (except Portugal and the western and southern portions of Spain), northeast Africa and in varying extent over much of western and central Asia.

The greatest moment of the eclipse (with nearly seven-eighths of the Sun’s diameter hidden) occurs at Sunset over the West Siberian Plain near the city of Nizhnevertovsk, Russia.

Do you plan to “Scope It Out” with Mercury?

Which October sky event are you looking forward to seeing most?

If you were going to rename October’s full Moon, what would you call it?

Look to the sky! Enjoy the stars.