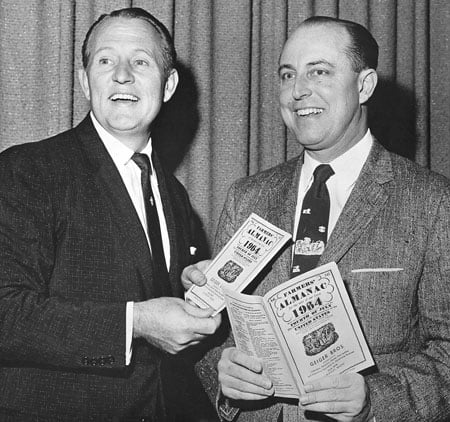 As a baby boomer, I remember “Art Linkletter’s House Party” and “People Are Funny” shows during the ‘50s and ‘60s. He is best remembered for his straight delivery to children who said the “darndest things.” His warmth and personal style made him one of the most popular figures on television.

My Dad, Ray Geiger, was editor of the Farmers’ Almanac from 1935 until his death in 1994. In the late 1940s, he started to appear on radio and television shows talking about the Farmers’ Almanac. His folksy almanac made for a wonderful interview on the House Party.  In fact it was Art Linkletter who dubbed Ray as the “Most Interviewed Man In America.”

During his lifetime, Ray Geiger appeared on the House Party three times.  In total, he made over 30,000 appearances and interviews on behalf of America’s favorite almanac.

Above is a photo from a 1963 interview. Art, thanks for bringing so much joy into the hearts of generations of Americans and for reminding us that people really are funny.

Fill a clean spray bottle with 1 part water and 2 parts rubbing alcohol and store it in your car during the cold weather months. Spray it on your frosted windshield and windows on those chilly mornings to make scraping easier.
More hints & tips