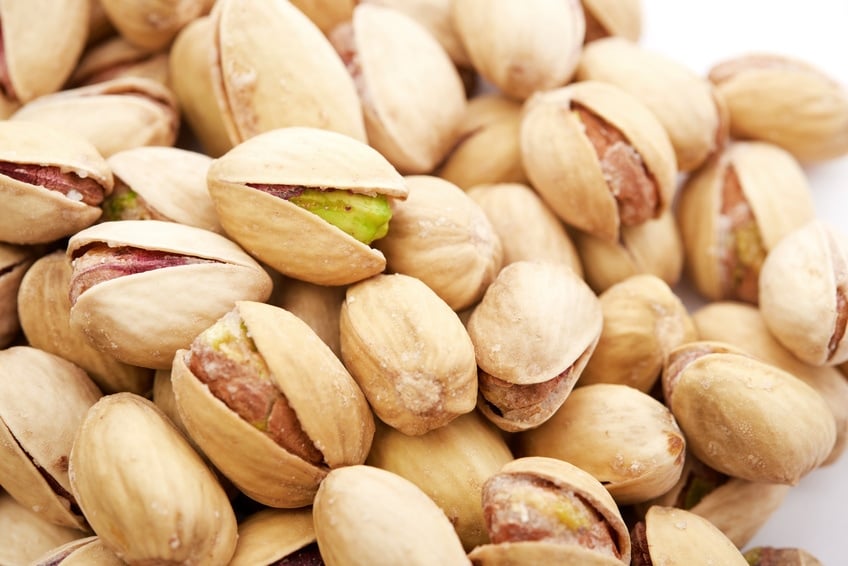 Where Do Pistachios Come From?

Pistachios are the seed of a small, plum-like fruit, or drupe, that grows in bunches like grapes. As the fruit ripens, it changes from hard and smooth and green, to soft and yellow/red. Eventually, the skin becomes wrinkled and softer, and this is usually when the pistachio is harvested.

Prior to harvest, the seed of the pistachio, which is the “nut” we eat, grows in its protective shell inside the fruit to the point where it bursts through and splits the shell with a loud crack.  It is said that if you are sitting under a pistachio tree and hear this sound, it’s good luck. The Persians called the pistachio “the smiling nut,” because the split shell resembles a smile. The Chinese call it “the happy nut.”

After harvest, the outer flesh of the pistachio is removed and discarded, and the nuts are sorted, sun-dried, then usually salted and roasted.

Most pistachio lovers of a certain age will remember a time when the nuts were dyed bright colors, usually red, but sometimes green. It was very rare to see pistachios with their natural tan shells. Eating pistachios always meant red fingertips and mouths. The reason pistachios were dyed had to do with the processing methods, which frequently left the cream-colored shells with stains on them from the outer fruit layer. The coloring was added to give the shells a more uniform and attractive appearance. Today, the nuts are usually processed by automated machinery, whose systems are efficient enough that the natural shells don’t become discolored.

The pistachio only began to be cultivated in this country in the late 1920s. Today, the major producers of pistachios are California, Turkey, and Iran.

The popularity of pistachios in the United States is directly related to the way most of us were introduced to the green nut: via creamy pistachio ice cream, which was always colored bright green and flavored with almond extract. Pistachios are also present in some Italian sweet treats, such as spumoni or Neapolitan, which featured layers of green, white, and red ice cream, the colors of the Italian flag.

Nutritionally, pistachios are high in protein and antioxidants. They contain monounsaturated fats, which make them a heart-healthy snack, and are a good source of vitamin B6, thiamin, magnesium, and manganese. While the nuts are available in your local market in both shelled and unshelled varieties, studies have shown that people who snack on nuts in their shells tend to eat less, consuming 41% fewer calories than those who consume the shelled variety. Scientists even call this “The pistachio effect”!

Here’s a recipe for a delectable dessert that pays homage to the pistachio’s middle eastern and Mediterranean roots. It’s a bit time-consuming, but worth the effort! 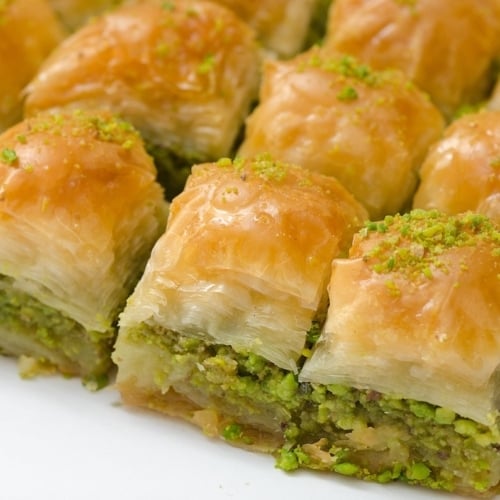 Like what you read? See where cashews come from!