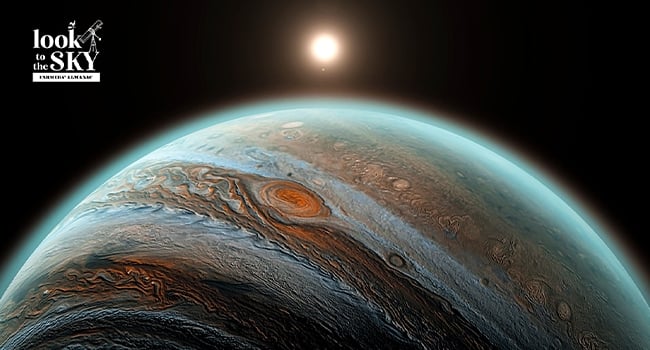 September’s Night Sky Guide (August 2022) is written by the esteemed astronomer Joe Rao, who serves as an associate lecturer at the Hayden Planetarium in New York City. Mr. Rao regularly contributes to the Farmers’ Almanac, Sky & Telescope Magazine, and Space.com. Read on!

This month, Jupiter will make its closest approach to Earth since 1963, so sky watchers will have a chance to see it in its full glory—as well as four of its largest Moons! Did you know that scientists theorize that Jupiter has as many as 79 Moons? See “Scope It Out” with Jupiter below.

Speaking of Moons, you’ll also have a distinct ability to track the Moon’s movement through the month’s night sky (See “Moon tracks” below.) Using Saturn, as a landmark, witness how the Moon progresses west to east (right to left) over the course of the month (rather than east to west, as it appears to move on any given single night.)

By the way, if you missed the “Summer Triangle” asterism in August, you’ll still have a chance to see it in the September sky (and into fall). Learn more here.

All times and positions for the next 30 days are listed in Eastern Daylight Time (EDT), 40 degrees north of the equator. Please note that any mentions of sunrise, midnight, and sunset are true for every time zone in the United States. Also, if the time is designated as “local,” it is also true for every time zone. (Do not count back three hours.)

For explanations of degrees (length in space) and magnitudes (brightness of stars) consult our “handy” chart and footnote at the bottom of this page.

Mercury is buried deep in the Sun’s glow in the opening days of September, but with you good pair of binoculars (or a wide-field telescope) you may find it on the western horizon fifteen minutes after sunset.

About a half hour before Sunrise, use binoculars (or a telescope) to see Venus passing Regulus (a bright star in constellation Leo). Venus will be less than one degree (less than the width of the tip of a picky finger) to its left. the planet and star stand seven degrees above the horizon.

In the evening, look for Mars. During September, it rises in the east about three and half hours after sunset and reaches its highest point in the sky just before dawn. The red planet is four and a half degrees (about three fingers width) north of its ruddy rival, Aldebaran, but at magnitude -0.2 it is more than twice as visible. (This is not always the case. Sometimes Aldebaran shines brighter!)

Did you know that the Moon moves right to left (west to east) over the course of the month? (This is the opposite direction that it appears to move on any given night.) Get a glimpse of its true motion as it orbits the Earth by using Saturn as a landmark on these two nights! Saturn is much slower moving than the Moon, so it makes a great reference point.

If either of these two nights happens to be cloudy or foggy, rest assured there will be many other chances in the future to track the Moon. Stick with us!

The Full Harvest Moon will be at peak illumination in the September sky at 5:59 a.m.

Harvest Moon is the name given to the full Moon that occurs closest to the date of the September equinox. This year, it comes unusually early, nearly two weeks before the equinox.

According to Kim Long’s The Moon Book, some other names of the September full Moon in colonial America were: The Fruit Moon, The Dying Grass Moon, and The Barley Moon. Such names drew from Native American traditions in the Northeast, especially Algonquin.

Almost directly overhead at around 9:15 p.m. local time this week, you’ll see the constellation Lyra, “the lyre” (which resembles a parallelogram attached to a small triangle.) Lyra’s brightest star, Vega, shines with a brilliant blue-white luster. (You may remember Vega as part of the Summer Triangle, mentioned in August’s Night Sky.)

At the southeast corner of the parallelogram is Sheliak, which is known as a “binary star.” It’s actually two stars that chase each other in a circle and appear as one star from a distance. From our perspective, the stars appear to eclipse each other every thirteen days. This causes its light to gently vary. It shines at magnitude +3.4, but when each of the stars passes in front of the other it’s a bit dimmer.

This evening, you’ll find Jupiter blazing about six degrees to the upper right of the nearly full Moon. The planet is south of the Great Square of Pegasus and southeast of Circlet, a dim star in Pisces.

By the way, have you seen the recent images of Jupiter from the James Webb Space Telescope? Here is one:

September 16 – Mars With The Moon

Late this evening, look low to the east-northeast horizon where you’ll find the Moon rising with Mars. They’ll be less than four degrees apart. Six degrees to the right of Mars will be the similarly hued star, Aldebaran.

Mars dazzles at magnitude -0.4. It is 80.4 million miles away and continues to slowly approach Earth. As it gets closer to us, it will become more brilliant (until early December).

The Sun reaches the equator at 9:04 p.m. and continues heading south (toward the Tropic of Capricorn—where it will arrive on December 21). This equinox marks the beginning of fall in the Northern Hemisphere (and spring in the Southern Hemisphere). Fun fact: If you happen to be at the equator on this day, you will have no shadow at noon. (The Sun will be directly overhead.)

Mercury passes inferior conjunction today and quickly enters the morning sky. It then brightens and climbs into view in the east before dawn at the beginning of October.

September 26 – “Scope It Out” with Jupiter

Jupiter will reaches opposition and will be very close to Earth (a distance of 367,394,813 miles). This will be Jupiter’s closest approach to Earth since 1963 (nearly 59 years)!

On this night, the giant planet will glare like a slivery light at magnitude -2.9 and display a sizable disk. Even in binoculars and small telescopes you may see its four Galilean Moons. (Jupter’s largest Moons are called Galilean because they were discovered by Galileo.) Did you know that scientists theorize that Jupiter has up to 79 Moons?

Keep your eyes peeled for Jupiter. Although it was closest to Earth over the last couple night, it will see be extremely bright and the most visible object in the night sky!

Do you have a special memory of the Harvest Moon? What is it?

Which September sky event are you looking forward to seeing most?

Look to the sky! Enjoy the stars.

Next time you're outside doing yard work, taking a walk (no matter how short), or hiking, take along a sticky tape lint roller and periodically roll it across your skin and clothes. Any ticks that have landed on you will be picked up.
More hints & tips 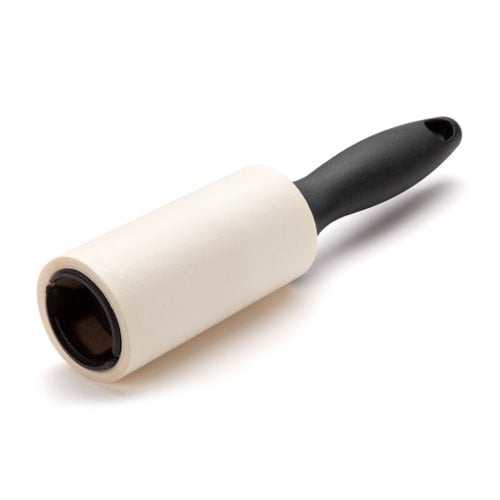