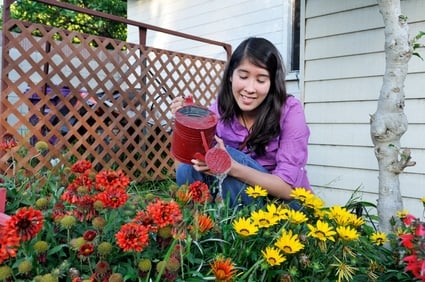 Botanist Fernand Lequenne wrote, “If you really want to draw close to your garden, you must remember first of all that you are dealing with a being that lives and dies; like the human body, with its poor flesh, its illnesses at times repugnant. One must not always see it dressed up for a ball, manicured and immaculate.” We give to our gardens and plants a sense of humanity and develop a bond with them. We delight in their growth and success and despair at their passing. Many ideas have been developed over the centuries about the proper and most successful way to nurture plants. One particularly common idea is the notion that singing to plants can help them grow.

In 1848, German experimental psychologist and professor of physics Gustav Theodor Fechner argued that plants have souls and that, like humans, they desired for and benefited from the companionship, conversation and nurture of others. Fechner believed that plants not only enjoyed the sound of music, but would be encouraged to grow better and bigger if they were spoken or sung to.

But is there truth behind the belief? Many studies have been done to test the hypothesis and though no consistent conclusion has yet been established, there has been evidence to suggest that plants that hear the sound of a human chatter are more likely to grow than those that don’t.

Though they may not necessarily be growing specifically to the melody of Bach or Chopin, there is some science behind why a plant might grow if sung to. When you sing or talk to your plant you are expelling carbon dioxide which the plant needs to absorb to allow it to go through the process of photosynthesis and grow. In turn, the plant releases oxygen back to you, which is both beneficial and important for your health.

Some studies have also suggested that certain types of music are more productive for a plant’s growth. Soothing, soft music, such as a lullaby, has been argued to make the plant grow the fastest, with some researches even suggesting that plants will lean into the source of the sound. Other studies have shown that loud, fast, and fiercely intense music can actually cause the plant to wilt and die. Researchers also argue that pronouncing words or utilizing songs that will cause you to breathe heaviest on the plant will distribute more carbon dioxide to the plant, in turn causing it to grow faster.

Whether we can conclusively deduce that plants do, in fact, grow faster when spoken or sung to due to science or some deeper connection between human and nature, one truth has shown itself to be evident throughout time, that developing a close relationship of nurture and care for a plant can bring only joy and happiness for both you and your plant.

I recently started to talk and sing to my plants and within 2 days they have all grown tremendously. I will start your apply this concept to every being in my life including my own body.

Heavy breathing on my plants have brought them back from the brink of death. They are stronger, darker green than they ever were! I practice that with all my plants now. Hope this helps!

From my experience I noticed that plants love to bond with us. They don’t only bond with us friendship wise but emotionally and spiritually. The glue that binds us is called love. Just like plants, love grows when nurtured and shared.
My point is yes plants grow better when sung to, talked to, and loved. To quote the bible Matthew 22:39 “Love your neighbor as you love yourself”
Plants live on this earth too so they are our neighbors metaphorically speaking

I definately think that it helps, I don’t know for sure but they sure do grow pretty.

yes i do believed singing helps plants grow faster and brighter,i sing and talk to my flowers at home every day they are so very much brighter and colourful. those same flowers i have at my work place and they seems to be always fading away. thank you give love to your plants every day especially your flowers.

I have heard this many times. I have forgotten, but I do think I talk to them on occasion. Just what us plant and flower lovers like to do!=)

i thing this e-mail is the most wonderful thing, and i would like to know the best time to repot house plants. Thank you.