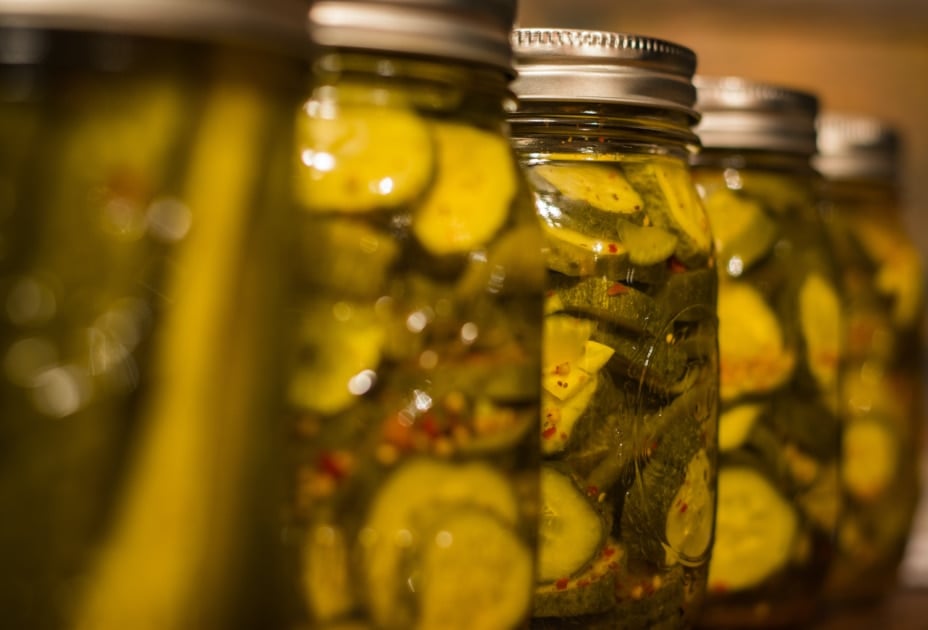 Learn more about the cooking technique known as sous vide and how it can be used for canning, particularly cucumbers and jalapeño peppers. A big thanks to Steve from Serious Keto for producing this video!

Want to learn more about keto/low-carb or in more kitchen techniques and hacks? Visit the Serious Keto YouTube Channel or check out Steve’s website at Serious Keto.

Hey there, Farmers’ Almanac subscribers, my name is Steve, and I run a YouTube channel and website called Serious Keto, the tagline of which is “Serious cooking. Sensible keto.”

My goal with Serious Keto is really two-fold: first is to create low-carb or keto recipes that are fun, delicious, interesting, and don’t taste low-carb. Second is to introduce kitchen techniques and hacks that can be useful whether you’re cooking low-carb or not. And that’s what we’re going to cover in this video.

We’re going to take a look at low-temperature pasteurization and canning. I have been pickling and canning cucumbers and peppers, and other vegetables out of my garden, for probably 10 or 12 years. And I’ve been using this monster of a pressure cooker.

Unfortunately, I’ve really grown to be a little bit tired of canning, and it’s just because there are so many downsides to using a pressure cooker in my opinion. For one, very often my pickles or peppers come out kind of mushy, and it doesn’t matter if I use pickling lime or not. Another problem is that it is just a huge time sink. It takes a month of Sundays to get water up to a boil or to come up to pressure in this thing. And that whole time you really kind of need to be babysitting it. Canning is not a “set it and forget it” sort of activity.

The other problem is the size. If say, you’re doing six or seven jars of pickles or peppers, yeah it’s the right size. But what if you just want to do one or two? What if you want to do twenty? You have a major issue with scalability when you’re looking at a pressure cooker.

A form of cooking that I have been a big fan of for, again, at least 10 years, is sous vide. Back when I started cooking sous vide, I had to explain what it was to everybody. Fortunately, over the last couple of years a lot more people have become familiar with sous vide cooking, probably as a result of all the cooking shows. It has also become a lot more consumer friendly in terms of price.

If you’re not familiar with sous vide, it’s a mode of cooking where you vacuum seal whatever you’re cooking inside a plastic bag, and then submerge it in a water bath, where you get a very tight control over the temperature.

I have found that sous vide is the only way I will do a steak anymore. Now if you’re used to grilling steaks and you like the medium rare, which is what I like, once you get to medium rare at the center of your piece of meat, which to me, I think, is about 130 degrees (that’s where I like it), 40 percent of your steak, because it’s cooking from the outside in, is well done.

Cooking sous vide in a temperature-controlled water bath, your cut of meat is 130 [degrees], edge to edge. And then you just give it a minute on some cast iron: glorious sear, beautiful, medium-rare steak.

The other advantage of sous vide is it really is sort of a “set it and forget it” sort of operation, because it is almost impossible to overcook something with sous vide. Plus, you don’t need to wait for the temperature to come up before you add your food.

The final advantage of sous vide that I want to mention is size. Look at the size of this thing. Takes up almost no space. You can put it right inside any of your kitchen drawers.

And that is the tool we are going to be using to jar some jalapeños and some pickles. In terms of pickling or canning, I’m going to assume you’ve got a pretty good knowledge of how to do it, so I’m going to cover that at a really high level.

First off, when I make my brine, my ratio of water to vinegar is one to one, so if I’m using four cups of water, I’m using four cups of vinegar. And then I add one tablespoon of pickling salt for each cup of water. So in that previous example, I would use four tablespoons of pickling salt. And if I’m doing peppers, that’s probably all I do for my brine.

If I’m doing pickles, I will add in some pickling spice, I may crush a couple of cloves of garlic, and I may add some sort of sweetener. If you’re not keto, just add some sugar; if you are doing keto or low-carb, my recommendation for sweetener is called Bocha Sweet. It’s spelled b-o-c-h-a-s-w-e-e-t. You can find it on Amazon. I would recommend that over any erythritol-based sweeteners, as those tend to fall out of solution and recrystallize.

I’ve already made brine for my peppers, but we need to make some for the pickles. So first off, I have two cups of water. Two cups of distilled white vinegar. Two tablespoons of canning and pickling salt. One tablespoon of pickling spice. And one tablespoon of sugar or something like Bocha Sweet if you’re low-carb, this is optional. And then I’ll move this off to the stove while we prep our cucumbers and peppers.

Unfortunately, we are right about at the end of cucumber and pepper season here in Wisconsin, so I don’t have a whole lot to can, but in a way that’s good, because I can show you how efficiently this works doing small-batch canning.

For my peppers I’m down to a handful of Hungarian hot wax and some jalapeños here. I recommend using a mandoline slicer just to get uniform cuts. I’ve got this set to a quarter inch. Also you’ll notice the kevlar glove, highly recommend this. If you’ve ever lost a fingertip by being a little overzealous with your slicing, you know what I’m talking about.

When I’m pickling, especially peppers, I always pour some warm brine over them and let them soak for a little while. I find that this helps them from floating to the surface in my cans. Then I’ll set a plate on top of them to submerge them. While my cucumber brine cools off just a bit, I am going to slice just enough cucumber for this pint jar.

One technique that I’ll use so I make sure I get the right height, is I’ll measure out my cucumber versus the jar, and give it a little slice, so I leave just the right amount of head space. Now I’ll just take these end pieces, make a little cucumber salad for dinner.

You can do your pickles however you want, but I typically throw in a head of dill seed from one of my dill plants in the garden, maybe a little chunk of fresh dill, one clove of garlic, smashed and peeled, and five or six whole peppercorns. We’ll get our pickles in there nice and tight. Let’s see if I can make enough space to get one more in here. It’s going to be tight.

Then I will ladle in some brine. I want about a quarter inch of head space. Put on our lid. Finger tighten our ring. You don’t want to go too tight, because you want that air to escape. I go to the point that it kind of starts turning the whole jar, with just a little bit of resistance from my other hand.

Next up, the peppers. Another great thing about soaking them is that gets rid of some of the seeds. Not that I mind the spice, but it just does create a slightly more aesthetically pleasing jar of peppers. And then I’ll pack these down. And ladle in some brine.

When you’re doing pepper slices, there’s lots of little places where air pockets can hide, so I get in with a chopstick, kind of poke down and around these a little bit. Give these another push down to make sure they’re all submerged. And a tiny bit more brine. It’s a little messy there so I’m going to wipe the rim down. Cap. Ring, finger tight, and now it’s time to pasteurize.

Pasteurization is a function of both time and temperature. The higher the temperature, the lower the time, and vice versa. I’ve seen a number of different explanations for the time and the temperature out on the web. Anywhere from 140 degrees for two hours, to 190 degrees for thirty minutes. I’m actually sort of in the middle of those two extremes. I let my jars pasteurize for 60 minutes at 180 degrees Fahrenheit.

Now because of the scalability that I talked before, you can do this sous vide pasteurization in any size container, from a pot like this for two, to an Igloo® cooler and do twenty. We’ll insert my two jars. Add my immersion circulator, this is the Joule® brand. You can see I’ve got water, covering both of the jars, and just to avoid any evaporation I’m going to put a little piece of plastic wrap on top of this.

If you’re using a large cooler, you just close the lid, power this on, and then using the app, we’ll start the Joule, we’ll set it to 180 degrees, and we’ll set the timer for one hour. Now, that timer doesn’t start until it hits 180 degrees.

And from there it’s just “set it and forget it.” I can walk away. I can watch a football game. I can do whatever I want. I don’t need to babysit this.

One recommendation I do make if you use this process, is put your jars in the water before you start up your immersion circulator. You don’t want any sort of thermal shock that might potentially, however unlikely, break the glass. Still, now, I’m free to do whatever I want. My phone app will tell me when it’s all done.

Here is a jar of jalapeño slices that I did about a week ago, and as you can see, the lid has compressed. We definitely have a vacuum. Let’s pop these open, and give them a little taste and texture test. Hear that? Here we go.

All right, these have a little bit of a kick to them, and there’s still just a little bit of crisp on them. I had actually done this batch as an experiment for two hours, so I think one hour is probably going to be my sweet spot at 180 degrees.

So I want to thank Frank Pagano and Farmers’ Almanac for inviting me to do this video. If you enjoyed this video and either want to see more of me, or want to see more low-carb cooking or kitchen hacks or techniques, feel free to stop by the Serious Keto website or YouTube channel.

Again, thank you so much for watching, and thank you Farmers’ Almanac for having me on.

Don’t forget to check out Serious Keto for more recipes and kitchen techniques!