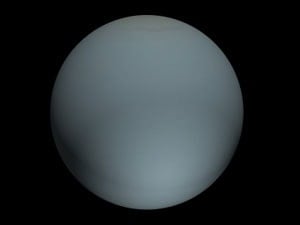 As far as planets go, Uranus may not seem very exciting. It’s not as big as Jupiter or as impressively arrayed as Saturn. It’s not as close to us as Mars or Venus, or as close to the Sun as Mercury. In fact, Uranus is so far away from us, it usually can’t even be seen with the naked eye. Look at little closer, though, and you’ll find that there’s more to “Bullseye Planet” than meets the eye.

– Uranus was first discovered by English astronomer Sir William Herschel in 1779. Some offer March 13, 1781, as the actual date of discovery, but this was just the date that Herschel announced his finding. Herschel initially thought his discovery was a comet, but other astronomers confirmed it was a planet by calculating its orbit. Uranus was the first planet in our Solar System to be discovered with a telescope, and the first to be discovered in the modern era. Mercury, Venus, Mars, Jupiter, and Saturn had all been known for millennia.

– Like Jupiter, Saturn, and Neptune, Uranus is called a “gas giant” because, though it looks solid, it is made up primarily of gases, such as hydrogen and helium, covering a rocky core comprised of heavier elements. Uranus and Neptune are also often referred to as “ice giants,” though, because their chemical composition differs somewhat from the two larger gas giants. Uranus and Neptune both contain more ice in their atmosphere, formed from compounds such as water, ammonia, methane, and hydrocarbons, than Jupiter or Saturn.

– Uranus’ diameter is about 31,764 miles, approximately four times that of the Earth. Its exact mass is unknown, but scientists estimate that Uranus has approximately 14 times more mass than Earth. It is the second least dense planet in our Solar System, after Saturn.

– It takes Uranus about 84 Earth years to revolve around the Sun, and about 17 hours and 14 minutes to make a full rotation on its axis. Because the planet’s surface is gaseous, some areas move more quickly than others. Portions of the planet complete a full rotation in as little as 14 hours.

– Astronomers have so far discovered 27 moons orbiting Uranus. Each is named for a character from Shakespeare or Alexander Pope. The five largest are Miranda, Ariel, Umbriel, Titania, and Oberon.

– Uranus is the only planet in our Solar System to be named after a Greek god, instead of a Roman one. It takes its name from Ouranos, grandfather of Zeus. The name was chosen by German astronomer Johann Elert Bode after the name Herschel had selected — Georgium Sidus, or the “Georgian Planet,” in honor Britain’s King George III — proved to be universally unpopular outside of Herschel’s home country. The preferred pronunciation of Uranus among astronomers is “UR-un-us,” as opposed to “ur-A-nus,” the double entendre pronunciation that often causes school children (and possibly a few adults) to giggle.

– Uranus has the coldest atmosphere in our Solar System. Temperatures there can reach a frosty -371° F.

– Uranus has the most pronounced axial tilt of any planet in the Solar System. At almost 98 degrees, Uranus is basically sideways in relationship to the other seven planets, making its rotation more like a rolling ball than a spinning top. The planet’s unusual tilt causes the poles of Uranus to receive 42 years of continuous sunlight or darkness, depending on where it is in its orbit.

– Though it is not as extensive as Saturn’s, Uranus has an impressive ring system composed 13 distinct rings. These rings are narrower and darker than those around Saturn. Each is only a few miles wide or less.

– Uranus is best viewed with a telescope or binoculars. Get your hands on a good star chart to find this strange and distant planet tonight!