Every once in a while, something will appear in the night sky that will attract the attention of even those who normally don’t bother looking up. It’s likely to be that way early on Saturday evening, December 28th, 2019, when a slender crescent Moon, just 8-percent illuminated, will appear in close proximity to the brightest planet in our sky. People, who are unaware or have no advance notice, will almost certainly wonder what that “large silvery star” hovering above the Moon happens to be?

Sometimes, such an occasion brings with it a sudden spike of phone calls to local planetariums, weather offices, and even police precincts. A few of these calls excitedly inquire about “the UFO” that is hovering closely in the vicinity of our natural satellite.

And coming just three days after Christmas, it will make for a wonderful celestial holiday ornament in the early evening sky; a sight pretty enough to adorn a Christmas tree until Venus sets around 7 p.m.

Venus has adorned the southwestern twilight sky since the start of autumn. No other star or planet can come close to matching it in brilliance. During World War II, aircraft spotters sometimes mistook Venus for an enemy airplane. There were even cases where Venus drew antiaircraft fire.

This winter, Venus is the unrivaled evening star which in the coming months will soar from excellent to magnificent prominence in the southwest at nightfall. It’s probably the first “star” you’ll see coming out after sunset. In fact, if the air is very clear and the sky a good, deep blue, try looking for Venus shortly before sunset.

A close conjunction of the crescent Moon and a bright star or planet can be an awe-inspiring naked-eye spectacle. The English poet, critic, and philosopher, Samuel Taylor Coleridge (1772-1834) used just such a celestial sight as an ominous portent in his epic “The Rime of the Ancient Mariner.” In addition, there are juxtaposed crescent Moon and star symbols that have appeared on the flags of many nations, including Turkey, Pakistan, Malaysia, Algeria, Mauritania, and Tunisia.

Also on Saturday evening, December 28th, you may be able to see the full globe of the Moon, its darkened portion glowing with a bluish-gray hue interposed between the sunlit crescent and not much darker sky. This vision is sometimes called “the old Moon in the young Moon’s arms.” Leonardo da Vinci (1452-1519) was the first to recognize it as what we now call “Earthshine.”

Keeping It All In Perspective

Keep in mind that this head-turning display will be merely an illusion of perspective: the Moon will be only about 245,700 miles from Earth, while Venus is nearly 490 times farther away, at 120,355,600 miles.

Those using binoculars or a small telescope will certainly enjoy the almost three-dimensional aspect of the Moon, but Venus will be rather disappointing appearing only as a brilliant blob of light, for right now, it’s a small, featureless gibbous disk. That will change in the coming weeks, however, as Venus approaches Earth and the angle it makes between us and the Sun allows it to evolve into a “half-Moon” phase in late March, and a lovely crescent phase of its own during the latter part of April and early May.

It was a very pretty site the other evening. To see Venus appearing so close to the Moon, and yes realizing that many nations probably copied that site in their flags. Just very nice to see and enjoy.

To conserve water, use a broom or rake to clean away leaves and debris from your driveway and patio rather than a hose. Using a hose can waste as much as 150 gallons of water. You'll get the added benefit of getting some exercise as well!
More hints & tips 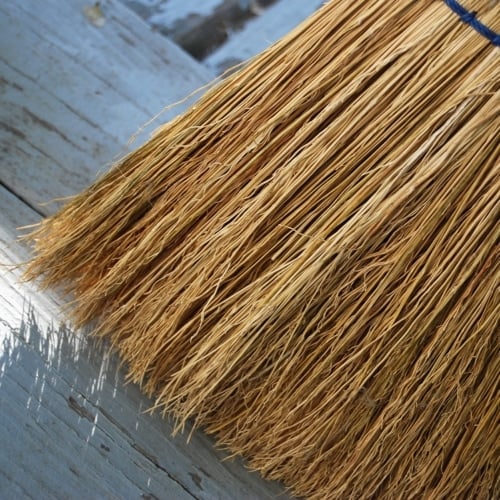