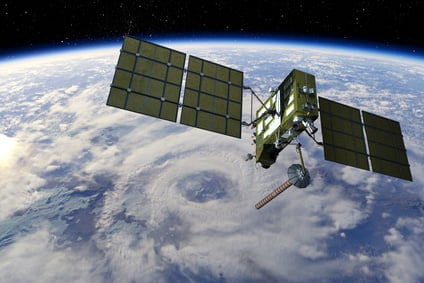 In astronomical terms, the word satellite refers to any body in space, such as a moon or planet, that orbits a larger body, like a planet or star. For example, our moon is a satellite that orbits the Earth.

Usually, though, when people use the word satellite today, they aren’t referring to a natural body in space, but a man-made machine launched into space at a precise speed required causing it to go into orbit around the Earth. Too fast and the satellite would rocket out into open space. Too slow and it would simply come crashing back to Earth.

What Was the First Satellite in Space?
The first artificial satellite ever to orbit the Earth was Sputnik 1, launched by the Soviet Union on October 4, 1957. Sputnik 1 was a shiny metal sphere about 23″ in diameter and weighing 183 pounds, with four external radio antennas used to broadcast radio pulses back to researchers on the ground, allowing them to gain insight into the makeup of our atmosphere for the first time ever. Soviet scientists were also able to deduce the density of the Earth’s upper atmosphere based on the drag on the satellite. The satellite’s trip lasted only three months before it burnt up in Earth’s atmosphere.

Sputnik 1’s successful launch triggered the Space Race of the 1950s and 60s, as part of the Cold War. NASA followed a year later with the Explorer 1 satellite. A year after that, in 1959, another U.S. satellite, Explorer 6, took the first picture of Earth from space.

What Types of Satellites Are Out There?
People launch satellites for a variety of reasons. Some look down at the planet and record data that helps us predict the weather or see what’s going on in remote corners of the Earth. Others help us communicate. And some take pictures of the far reaches of the Universe to help us understand what else is out there. Here’s a look at some of the most common types of satellites:

Astronomy Satellites – This type of satellite is essentially a massive telescope floating in space. Astronomy satellites are able to see up to ten times farther into space than a telescope on the ground because the gasses that make up the Earth’s atmosphere don’t obstruct its view. The famed Hubble Space Telescope is one example of an astronomy satellite.

Atmospheric Studies Satellites –  Atmospheric studies satellites do exactly what their name suggests: they record data about the different layers of Earth’s atmosphere so that scientists can have a better understanding of the world above us.

Reconnaissance Satellites – Reconnaissance satellites are used by governments for gathering intelligence on foreign countries. These satellites might be used to scope out military movements, intercept communications, and detect, or even launch, missile strikes.

Remote Sensing Satellites – These satellites are used by scientists to monitor resources on the ground, particularly in remote areas that are hard to reach by land or sea. A remote sensing satellite my record information about drought conditions, fires, animal migration, or other large-scale phenomena of interest to researchers.

Search and Rescue Satellites – These satellites are used to support search and rescue missions. For instance, a lost or injured mountaineer might carry a device that will broadcast his location to a satellite above, which then bounces the location information back to a search team, reducing the time it takes to rescue him.

Weather Satellites – These satellites take pictures of weather systems so meteorologists can see what systems are headed toward a given area and at what speed. This allows them to virtually see into the future, making it possible to prepare for most severe weather systems before they strike.

The moon is stationary above us. Man made satellites are not stationary. The moon is the only earth satellite. The earth is not stationary in sun belt. I wish DishNetwork would broadcast their earth channel again! A true View of Earth. No photoshop like NASA.

So, some are stationery over us, and some are going faster than the rotation of the earth, correct?