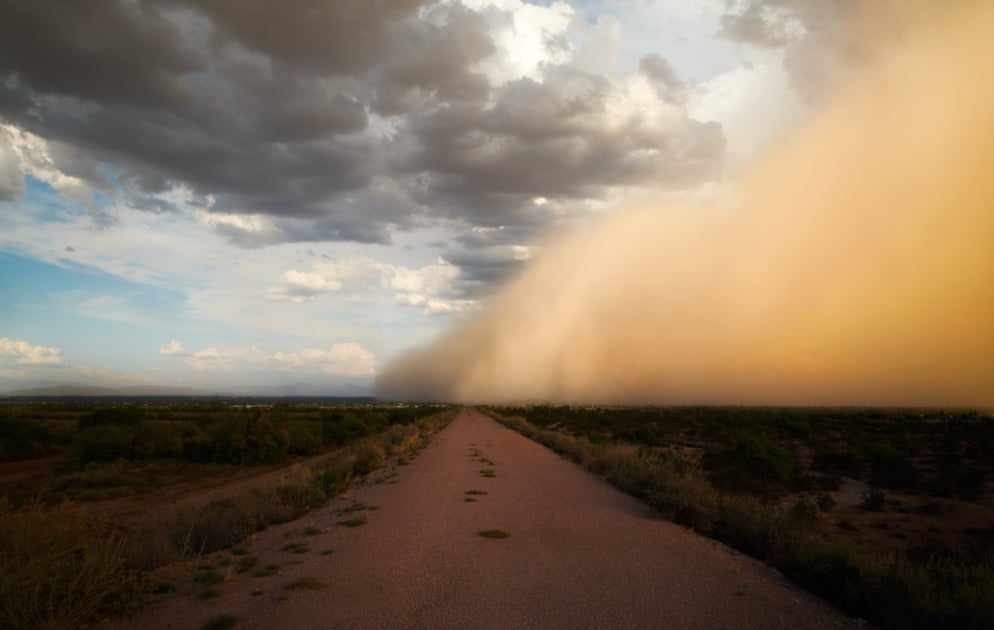 If you’ve been keeping up with recent weather news, you may have seen that another massive cloud of red dust flowing off Africa’s coast is heading once again for the US (the first was in mid-June). Who will be impacted this time, and what can we expect when it arrives?

As another cloud of Saharan dust swirls across the Atlantic Ocean towards the southern U.S., one of NOAA’s newest models is providing more accurate forecasts of where the air quality impacts of the dust will be felt. Animation courtesy of NOAA Research.

Just as it sounds, a Sahara dust plume is a cloud of dust that’s blown from the Sahara Desert in Africa. It originates from the Saharan Air Layer (SAL)—a mass of very dry, dusty air which forms over the Sahara from late spring to early autumn. The west-to-east-blowing trade winds pick up hundreds of millions of tons of SAL sand and blow it off the west coast of Africa out into the Atlantic Ocean. Typically, the plume remains just offshore, but on occasion, it travels as far west as the Caribbean Sea and Gulf of Mexico—a distance of more than 5,000 miles.

This time around, NOAA says it is better prepared to offer advance warning for states in its path this time compared to June’s storm. NOAA’s model shows the cloud is destined for the Gulf of Mexico, with the smallest particles reaching southern Florida by around 5 a.m. Sunday, July 26th. The NOAA model predicts that through Tuesday, July 28th, the dust cloud targets the southern coasts of Georgia, Alabama, and Louisiana.

Does The US Normally Get Dust Storms?

When we think of dust storms, many of us think of them as historic events (e.g., the 1930s Dust Bowl) or blockbuster disaster films. But dust storms are very real and still occur today.

Haboobs are one type of dust storm that occur a few times a year in hot, dry US states like Arizona and Texas. But the United States’ largest dust events don’t come from U.S. borders at all—they originate from the Sahara Desert in Africa.

Notice a similarity between these plumes and Atlantic hurricanes? They both occur in similar seasons and follow similar paths toward the United States. This is actually bad news for hurricanes since tropical cyclones need moist air and calm winds in able to grow—two things Sahara dust plumes lack. If a dust layer hangs around, it could help defend against tropical activity.

Dusty weather isn’t something most folks experience very often, so preparing for it can be puzzling.

What To Expect From This Dust Storm

With billions of tiny dust particles (from the faraway Sahara Desert!) suspended in the air, don’t be surprised if the sky looks slightly milky in color.

While dust plumes are fascinating, keep in mind that the dirt, dust, and sand they bring is a form of (temporary) air pollution. Breathing in these particles can be unhealthy, especially for those with asthma or other respiratory illnesses. By monitoring your daily air quality index, you’ll know when it is and isn’t safe to spend time outdoors.

Areas that see the thickest clouds of dust and that also have a chance of rain in the forecast could experience blood rains—orange, brown, or red rainfall whose water is tinged by dust’s color.

As Saharan dust passes over oceans and lakes it can trigger harmful algal blooms. Algae in these bodies of water eat the iron-rich dust and multiply or “bloom” at exponential rates. These algal blooms or “red tides” can kill fish and cause skin and respiratory problems in humans.

Not everything about Sahara dust plumes is hazardous. As sunlight filters through dust-laden skies, sunrises and sunsets will produce some of the most brilliant orange, red, and pink skies you’ll ever see, so be sure to get your camera ready!

To keep track of the Saharan dust plume in real time, visit NASA’s Earth Observatory website, for updated reports, or check out the the Colorado State University’s Cooperative Institute for Research in the Atmosphere (CIRA) website. Their real-time tool lets you zoom in, overlay various data points, and even change the playback speed.

The Southern coast of Georgia? Oh, here in Georgia we call that “Florida”. Lol

Quite interesting, I heard the plume was coming. How long does it last? When will it be in Florida?

I have been looking for a calendar with moon phases for gardening and it has health information as well .Do you have this?

Hi Virginia, are you looking for a paper calendar or online? We have all three for what I think you’re looking for right on our web site, however there are three separate links:
Gardening Calendar
Zodiac Calendar
Moon Phase Calendar
We also have Moon folklore!