by Jaime McLeod Updated: May 2, 2022
EmailFacebook37PinterestTwitter 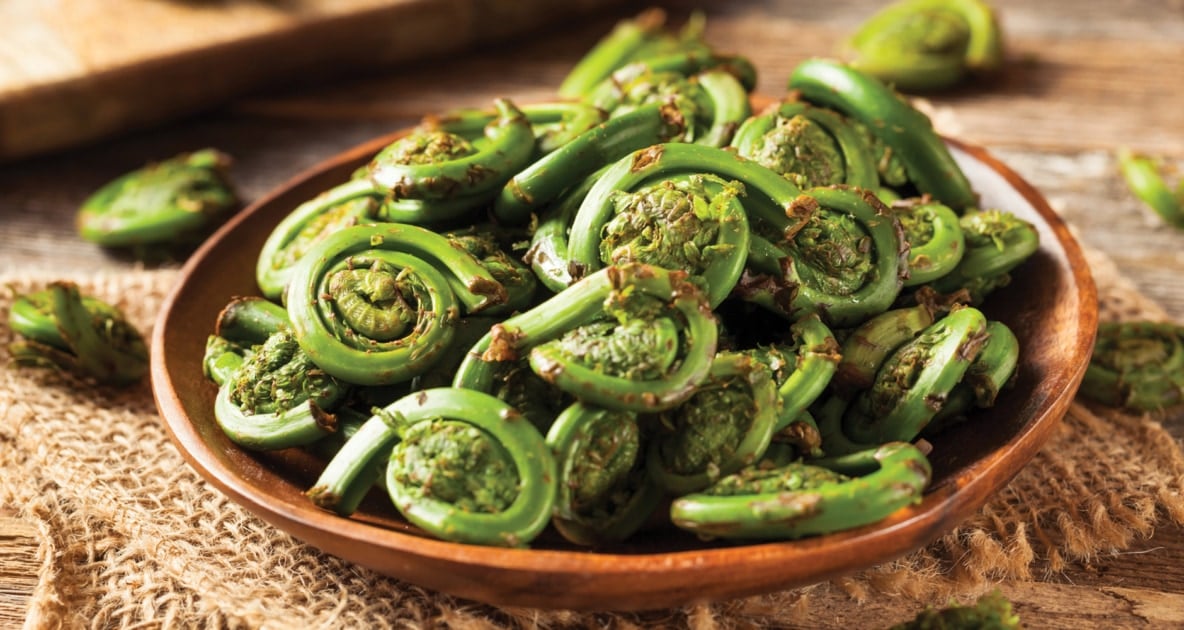 Fiddleheads, also known as fiddlehead ferns, are a springtime delicacy consisting of the tightly coiled fronds of a new fern. They’re named because of their resemblance to the curled decoration at the end of a stringed instrument (a perfect example of biomimicry).

The most common type of fern eaten in North America is the ostrich fern, which grows primarily in the northern latitudes, from New England through Canada and Alaska, during April and May. Other types of ferns are enjoyed in other regions, including Northern Europe, East Asia, and Australia. Besides the ostrich fern, the types most often harvested as fiddleheads in North America are the cinnamon fern and the royal fern. Bracken fern is also commonly eaten throughout the world, though it contains a suspected carcinogen, and should be avoided, or eaten only in strict moderation (a few times per year, at most).

Where Can You Find Fiddleheads?

They are usually picked wild in forests and along rivers, though they can sometimes be bought at farmers’ markets or along the roadside. If you plan to pick some yourself, be sure you have permission from the landowner and know for certain what you are picking.

The flavor resembles fresh asparagus or a milder version of broccoli. Most people enjoy them boiled or steamed, then sautéed in butter and garlic or tossed with vinegar. They can also be substituted for other greens in all sorts of recipes. Because the window for fresh fiddleheads is so short, many aficionados freeze or can them to enjoy throughout the year. To freeze, first boil for two minutes, then plunge the drained ferns into cold water to stop the cooking. Drain, and pack them up in freezer bags or containers.

Check out our recipe for spaghetti, fiddleheads, and artichokes.

They are! They’re rich in antioxidants, Omega 3 and Omega 6 fatty acids, potassium, vitamin A, iron, and dietary fiber.

How To Cook Fiddleheads 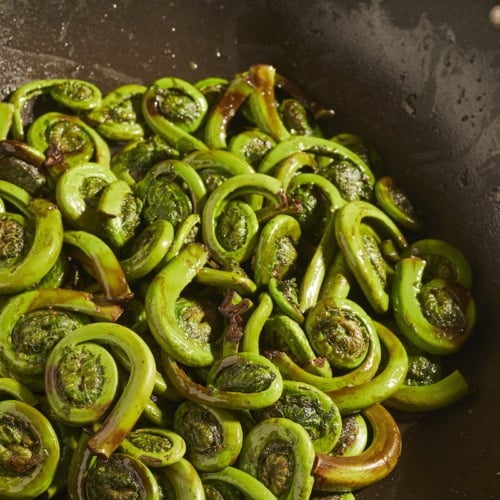 Keyword fiddlehead fern recipe, pickled fiddleheads for sale
Tried this recipe?Let us know how it was!

First, remove the papery brown skin and boil the sprouts twice for five minutes each time, changing the water in between boilings. This will reduce the bitterness from the tannins in the plant. Ferns should not be eaten once they pass the tightly coiled fiddlehead stage, as many species become toxic when they mature.

Try some of these other recipes!

Keyword fiddlehead salad, fiddleheads plant
Tried this recipe?Let us know how it was! 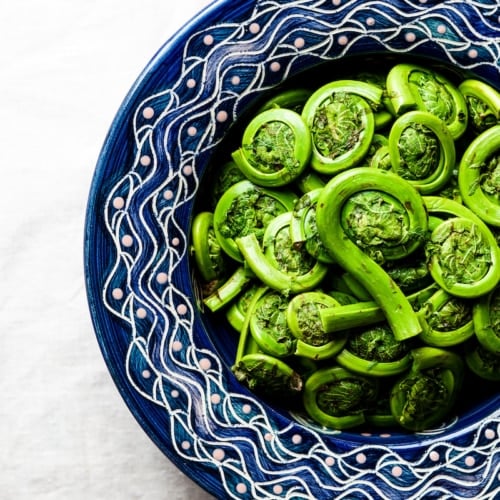 Keyword fiddlehead fern benefits, fiddlehead salad calories
Tried this recipe?Let us know how it was! 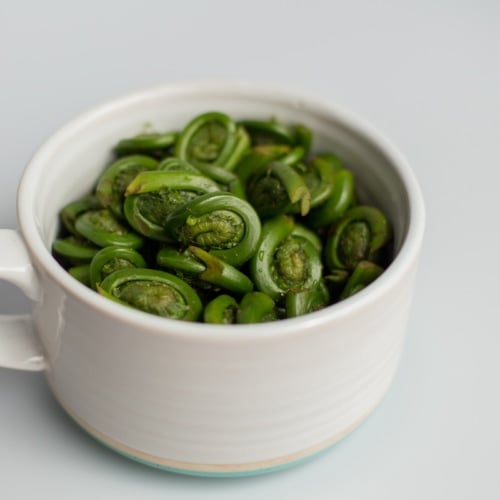 Keyword fiddlehead fern benefits, fiddlehead soup
Tried this recipe?Let us know how it was!

I am from philippines and i recognized only local fiddlehead ferns that we eat all year long. I live in WA state now. There’s a lot of ferns here, but how would you know that it’s edible? Every ferns looks the same. If ever you eat the wrong one, will it be fatal?

Many ferns are known to be carcinogenic, but as far as I know the ostrich fern is safe. It’s easy to identify because it grows from large crowns that are mostly above-ground, and the short, compact, fertile fronds that grow in the center often last through the winter and are present as fiddlehead season approaches.

the article said -Ferns should not be eaten once they pass the tightly coiled fiddlehead stage, as many species become toxic when they mature.
i would love to try this next year but this statement concerns me. I love in Florida so i will have to inquire about ferns here

I asked about Bracken and got fiddleheads. Are they the same? it appears that fiddleheads are desirable in one’s garden. If Bracken is not the same as fiddleheads, then is bracken also desirable ?

Hi Joy,
I’m not sure what you mean by “desirable.” Desirable for what? For eating? For ornamentation? “Fiddlehead” simply refers to the young stage of any fern, when it is coiled into a tight little spiral. Bracken is a type of fern. It looks like the head of a fiddle when it first comes out of the ground, just like every other type of fern. Some types of ferns are edible when they are in the fiddlehead stage. The most commonly eaten is the ostrich fern. Some people do eat bracken fiddleheads, though they are believed to be carcinogenic (cancer-causing) in large quantitites, so it not recommended. All ferns can be lovely for ornamentation, though they are no longer fiddleheads when they’ve reached their adult stage. I hope that helps. If not, feel free to follow up, as I’m not really clear on what you are asking.

Will picking the fiddleheads kill the fern? Sounds interesting but I’d hate to kill the ferns I worked so hard to get growing!

Hi Sue,
Good question. Each fern root produces seven fronds. Recommended fiddlehead etiquette is to pick three fiddleheads from each plant, leaving four behind. This will ensure that the plant will survive, and produce more fiddleheads for years to come.

We live in northern New Brunswick , where every year it’s a festival for this plant , we pick we eat till there not tomorrow , we freeze for the winter , then come spring it’s starts all over again , but around here we eat it as a side dish to meat and potatoes with just butter and a bite of salt and pepper but will try other recipes this year , also here fiddlehead season start in the last two weeks of May and only last about a week or two 🙂

How do you freeze them?

Hi Margi, boil the cleaned fiddleheads in boiling water for two minutes, plunge in ice water to stop the cooking process, drain, pat dry, and bag ’em up for the freezer.

there is a business located in Wilton,Maine by the name of Belle of Maine Cannery,it sells fresh fiddleheads all over the United States.this cannery also cans and pickles fiddleheads and buys fiddleheads from local pickers.they follow the season from new hamshire to northern maine and the season lasts about 5 weeks..it can be found under strange maine sub category dandelions which they used to can also..

Liked this article alot only wish I would have know about fiddleheads when I
lived in Western WA State. Ferns were abundant!

My Mother-in-law was a dietician and came up with the following recipe and we honor her every year by eating them this way.
Cynthia’s Fiddleheads:
2 lbs cleaned fiddleheads
1 cup water
3 Tablespoons soy sauce
1 1/2 teaspoon oregano
Place cleaned fiddleheads in a pan (we use a fry pan) add water, soy sauce, & oregano, cover, bring to a boil & turn heat down and simmer for 10 to 15 minutes or until tender. Enjoy