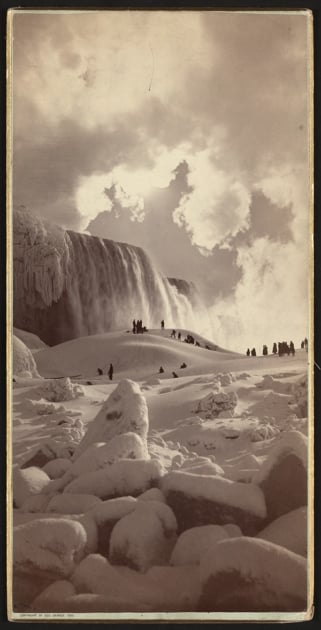 When temperatures drop to sub-zero, one of the more popular subjects is Niagara Falls. Images of the majestic and powerful natural wonder appearing to be frozen over surface each winter on social media and no doubt capture the imaginations of millions. Previous winters where temperatures dropped low enough to freeze parts of the falls include 1911, 1932, 1977 and 2015.

However, one of our favorite images of all time is this 1883 contribution from the notable Canadian-American photographer George Barker. The photograph is simply titled, “People on snow-covered ice at the base of the frozen American Falls, Niagara Falls, New York.”

(Photo courtesy of the Library of Congress)

What was the real temperature at which the Niagra falls froze over in 1883 ?

It is pretty amazing! Definately add this to places to visit.

This is actually pretty cool looking!!

Props to the women who had to trudge thru in high-button shoes, bustles and corsets while their male counterparts’ clothing was more suitable for athletic endeavors!

See they had global warming back then too.