If Peter Geiger hadn’t become the seventh editor of the world-famous Farmers’ Almanac, he would have wanted to write a syndicated column offering handy, time saving household hints. Luckily for famous hint maven Heloise, Peter’s fate was sealed from an early age. His father, longtime editor Ray Geiger, began priming him for editorship at the tender age of 7.

“As early as his 40s, it was important to my father that there be a successor, even if that person was only 7 years old, and couldn’t read,” recalls Peter. “My father told me no editor had ever died under the age of 86. That sounded like a good enough reason to me.”

In the mid-1970s, shortly after graduating from Villanova University with a bachelor of science in business administration, Peter began working under his father as Associate Editor. He assisted with 16 editions, finally taking over as Editor in 1994, when the elder Geiger passed the mantle to him after 60 consecutive years at the post.

An avid outdoorsman, Peter enjoys hiking, canoeing, and kayaking. Recently, his love for the water led him to enter the annual Giant Pumpkin Regatta in Windsor Nova Scotia, paddling a massive hollowed out pumpkin across Lake Pesaquid.

As befitting his title, (Philom means “lover of learning”) Peter has been a tireless champion of public education for more than 20 years. In 1987, he founded an Adopt-A-School program with his neighborhood elementary school, and has since spurred other businesses in his home state of Maine to follow suit. He has been nationally recognized for his contributions to education, most notably receiving President George H.W. Bush’s 618th “Point of Light” award in 1991.

Peter also serves as Executive Vice President of Geiger, his family’s fourth generation promotional products company. The Lewiston, Maine-based business is the largest privately owned company in the promotional products industry, and the exclusive distributor of the Farmers’ Almanac.

If only Sandi Duncan could remember all of the interesting bits of trivia she’s learned throughout her years of editing the Farmers’ Almanac, she’d be able to make a fortune on the television quiz show circuit and retire comfortably. Luckily for her millions of readers, the first woman ever to edit the Farmers’ Almanac isn’t as good at memorization as she is at putting together North America’s most timeless, trusted, and treasured publication.

One of the most unusual things she’s learned over the years is that there really is a best day to castrate farm animals, based on the phase of the moon.

Sandi has worked on the Farmers’ Almanac since 1994, serving two years as Associate Editor before stepping up to become Managing Editor. Title aside, Sandi wears many hats, not only directing the editorial content, but also building and overseeing its circulation, coordinating marketing and publicity for the annual publication, and managing the content of the Almanac’s ever-popular web site.

Despite her hectic schedule, Sandi firmly believes in the “lost art of doing nothing,” an important idea that has appeared in the pages of the Farmers’ Almanac, as part of its mission to promote “the simple life.”

Like the Farmers’ Almanac, Sandi was born in New Jersey. Despite also being born on a Friday the 13th, she has led a charmed life, finding the career of her dreams. Ever since a story she wrote in elementary school was published in her school’s PTA newsletter, Sandi knew she wanted to do something creative with her life. At one time she also wanted to be on TV, which now thanks to the resounding interest in the Farmers’ Almanac, she’s fulfilled that dream and has been seen on many channels, including CNN and Public TV.

“In this day and age of busy lifestyles and high tech gadgets, it’s important to have a publication that reminds us of what life used to be, should be, and can still be,” Sandi says. “The Farmers’ Almanac is part of our heritage, tradition, and way of life. I feel privileged to work on such an important piece of history.”

If you can't get to a toothbrush, try an apple! Munching on a raw apple after a meal cleans the teeth and helps heal the gums.
More hints & tips 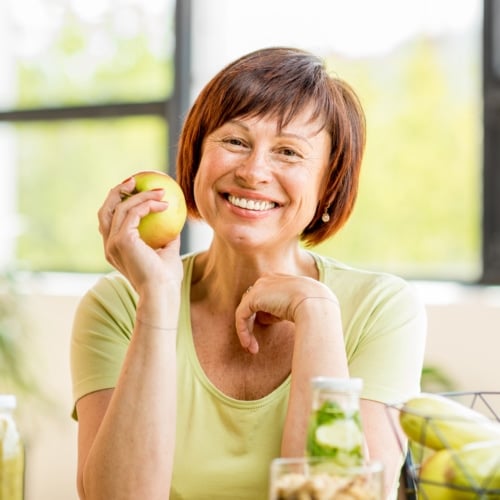