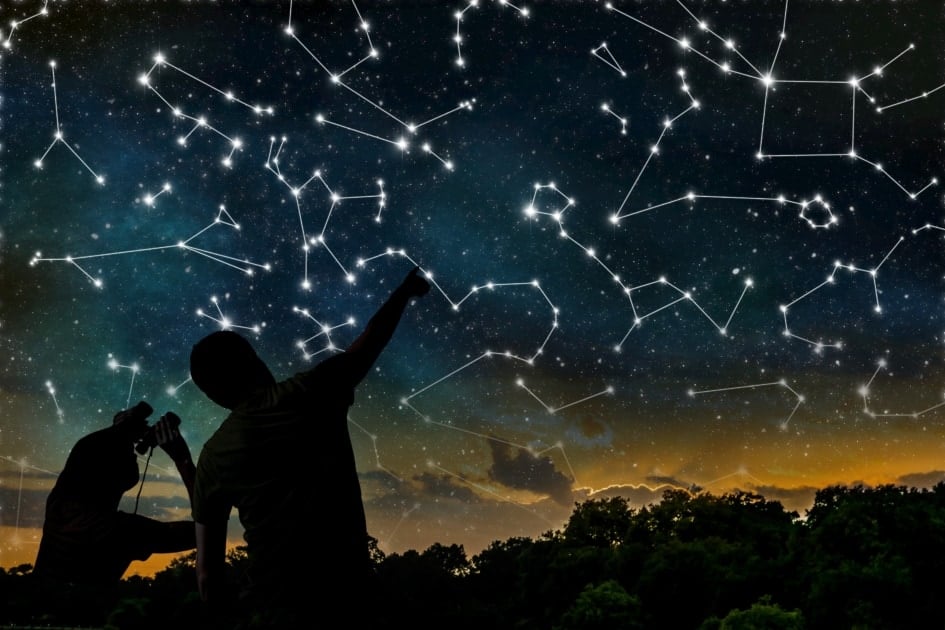 Have you ever looked at a star formation in a book, magazine, or here on the Farmers’ Almanac website, and thought, “how’d they come up with that name?” Don’t worry, you’re not alone. Many constellations, frankly, don’t look anything like what they’re named.

With their intriguing names, one would expect to see a constellation in the shape of a lion, an eagle, a bear, and other animals and figures. But many look nothing like their namesake. Some simply appear as geometrical shapes, which in many cases do not look like much of anything.

Remember, of course, that a few thousand years ago there was not much to entertain people once the Sun went down. They would go outside under the cover of darkness, look up at the stars, and weave stories or tales about people, animals, and mythical beasts, and use the patterns of stars as illustrations. In many ways, the development of the constellations might have been the first example of the popular children’s game, “connect the dots.”

The constellation of Sagittarius, for instance, is supposed to represent an archer who also just happens to also be a mythical half horse/half man creature known as a centaur. But today, most star maps depict Sagittarius not as an archer, but as a teapot!

And the seven brightest stars of the Great Bear (Ursa Major) is better known today not as a big bear, but as The Big Dipper. And to further complicate matters, those living in the United Kingdom call it a plough!

Then there is the antithesis of a complex sky pattern in Canis Minor, the Little Dog. Its brightest star is Procyon, the eighth brightest star in the sky. It is a yellow-white star, six times as luminous as the Sun. Go outside this week and look low to the eastern horizon at around 11 p.m. and you’ll readily see it. The name Procyon has been in use since the days of ancient Greece. It is the equivalent of the Latin word Antecanis or “Before the Dog,” an allusion to the fact that Procyon rises immediately preceding Sirius, and thus heralds the appearance of the great Dog Star.

So on any evening, when you head outside and look at the constellations, remember that many of their names were the result of ancient stargazers’ active imaginations. In fact, in today’s society, we can look up at the stars and create patterns of our own that would have made no sense to them!

IMHO I think it’ ignorant to “Remember, of course, that a few thousand years ago there was not much to entertain people once the Sun went down.” How would one even begin to presume that? Secondly, we aren’t able to see many of the stars that our ancestors did due to the extreme light pollution put out by the people on this planet. Perpetuating the belief that we know now so much more than our ancestors did then is what’s keeping us disconnected from our past. We’ve forgotten where we come from. We’ve forgotten, or been kept from so much lost / hidden knowledge. Apparently they knew way more about the stars, planets and other planets that we do in our “advanced civilization” today when you just acknowledge the correlation of the Great Pyramids at Giza and Orion’s Belt.
Stop looking down into your precious little hand held devices and look up. I mean really.. look up.