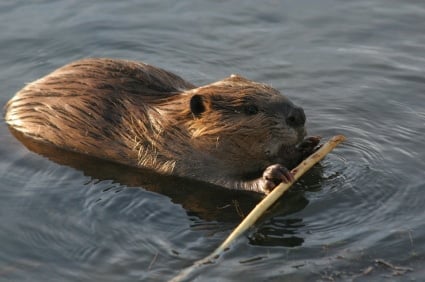 The beaver is the largest of all the rodents found in North America. They grow to lengths of 34 to 36 inches, with tails adding 12 to 18 inches. Adults weigh in at between 30 and 65 pounds. They have webbed, clawed hind feet, a paddle shaped tail, which is also hairless and scaled, and thick brown fur that is insulating and waterproof. Males and females are virtually indistinguishable in the field.

The beaver’s range includes most of the forested areas in North America. From Alaska and northern Canada, they reach as far south as Central California and Northern Nevada, Northern Mexico, across the Gulf Coast into Northern Florida. Beavers inhabit rivers, lakes, streams, ponds, swamps and wetlands.

Beavers create a dam by cutting sticks and branches with their teeth, then shoving them into the bottom of a stream bed. They then pack mud and other debris on top, adding more sticks and branches as needed until the flow of water is stopped…. creating the “pond”. This pond provides the beavers with access to food and protection. Beavers will also dam up man made ponds, causing problems for landowners. This damming is performed instinctively in response to the sound of running water.

Contrary to popular belief, beavers do not live in their dams. Instead they construct teepee-shaped lodges from sticks, branches, and mud, upstream from the dam. There is a dry chamber in the lodge which creates a place to raise their young, a cover from the elements, and protection from predators.

Beavers are semi-aquatic mammals. They use their large, flat tails to balance them when standing, as a rudder when swimming, and as a warning tool, by slapping it on the water when threatened by other beavers. Fat is also stored in the tail to use in winter for energy.

Beavers are active year round, primarily nocturnal, and are extremely territorial. They will not tolerate beavers from outside their own colony, which usually consists of an adult pair, two to four kits, and two to four yearlings.

The value of beaver pelts is part of what drove European trappers and fur traders to explore much of this land that is now the Northern U.S. and Canada. Beaver pelts became the standard for trading between Native Americans and trappers, traders, and settlers. Native Americans used beavers for food, clothing, and medicine. The unrestricted taking of beavers, along with the deforestation of North America, both caused by European colonization, pretty much eliminated them from much of their range for a time. Trapping and relocating efforts by some states in the early 1900s helped the beaver population to grow and expand to its current healthy levels.

Beavers feed on leaves, twigs, roots, shoots, and the outer bark of trees and shrubs. Beavers prefer birch, aspen, ash, alder, willow, and apple trees, but they will eat any type of tree and shrub if their preferred diet is not available. During the summer, they will eat water lilies, pond weeds, sedges, and grasses. During the fall, they create a food cache just outside the lodge, storing food for the winter.

Beavers are monogamous, having only one mate during the breeding season, and more often than not, for life. Breeding occurs in mid-winter, with a gestation period of 100-110 days. A litter of two to five kits is born in May or early June. Kits are well furred and have fully developed teeth at birth. They begin to eat vegetation at two to three weeks and are fully weaned at about six weeks. The young remain with the adults until their second year, when they are driven from the colony, forcing them to find a mate and establish their own colony.

Conflicts between humans and beavers have grown steadily over the years. Humans have aggressively encroached on wildlife habitat, while the beaver population has, at the same time, grown exponentially.

There are two main categories of beaver damage: flooding and tree cutting. Beaver activity can threaten property, agricultural crops, or public health and safety. Their main activity — dam building — can also cause problems for natural resources, such as blocking fish from migration, and the inundation and siltation of rare plant and animal habitats. They can also cause roadways to become flooded by blocking off storm drainage.

There are no known repellents for beaver, and harassment techniques are not generally effective. The continual removal of dam debris may cause a young, non-established beaver to leave, but it is rare.

Damage from flooding caused by beaver dams can sometimes be mitigated, though. Water level control devices may be implemented in certain situations to reduce flooding to a tolerable level for the landowner, while still maintaining suitable habitat for the beavers. These devices are installed with different materials and techniques, but they all follow the same line of thinking. They all include placing a device, such as a pipe, through the beaver dam. This allows the dam to stay, and the water to flow. One could also use a perforated pipe, wooden boxes with mesh bottoms or perforated aluminum piping. Note: Landowners should consult a professional, as well as their local wetland commission, before installing water level control devices.

To reduce damage by beavers to storm drainage systems, try installing a strong woven wire fence in front of culverts, ten to fifteen feet away. This will usually cause beavers to build their dam away from the culvert, allowing water to flow. Factors such as water depth, wetland substrate, and topography should be considered.

The best way to protect trees and shrubs from beaver damage is to wrap heavy duty, steel mesh fencing around the base. It must be installed at least four feet high and at least six inches away from the trunk to be effective.

Another proven method for managing beavers is trapping. This method speaks more to regulating beaver numbers for healthy populations, though, than it does to water levels and tree decimation. If you remove all beavers from a favorable beaver habitat, others will generally move in to fill the void. The best strategy is to follow the advice above and try to live together in relative peace.

We have 14 acres, mostly wooded, with a small pond and swamp area. Beavers moved in a few years ago and after the initial “destruction” have greatly improved our pond. It is deeper and clearer and they have removed the excessive growth of water lilies. We’ve also collected some of their cut trees for use as firewood and fence posts.

do you know where i can buy beaver for breeding?
thank you

The beavers caused quite a bit of damage at our cottages last summer & fall.
There were fallen trees across our beaches and wood that had been cut and piled were taken away by beavers (the evidence was there; cut wood was trailed all the way to the beaver house 6 cabins away)

Enjoyed reading about the beavers………We live in the country and have lots of small and large animals…………Moles or goffers . about to take us over……We have as usual about 5or 6 deer. Haven’t seen them lately……… Racoons and lots of rabbits.

Use an egg slicer for cutting mushrooms. It’s quicker and you get nice, even slices.
More hints & tips