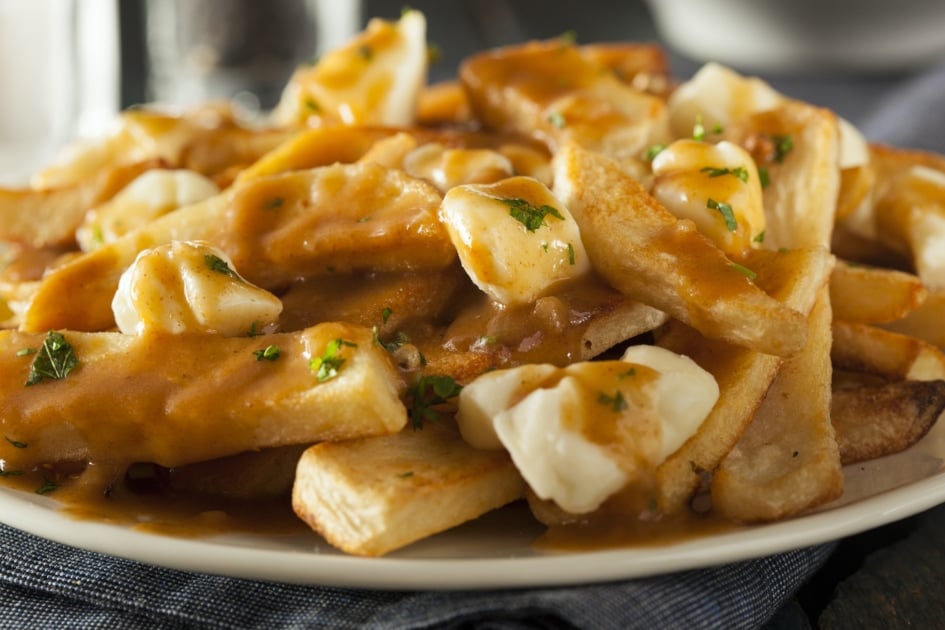 Though not technically Canada’s official food, poutine—which consists of french fries topped with cheese curds and gravy—is arguably one of the Great White North’s most distinctive contrivances. There’s even a holiday for it: International Poutine Day is celebrated on April 11th each year.

Though no one knows its specific genesis, poutine is widely believed to have been invented in rural Quebec sometime during the 1950s.

What Does Poutine Mean?

Its name comes from a Quebecois slang word meaning “mess,” and one popular story posits that Warwick restaurateur Fernand Lachance created it in 1957 at the request of longtime customer Eddy Lainesse. While making the dish, Lachance is said to have exclaimed, Ca va faire une maudite poutine! (Roughly translated: “It will make a damn mess!”).

While Lachance’s is among the most popularly cited tales, other restaurants in towns throughout Quebec lay similar claims on the beloved concoction.

For those not hailing from Canada or a bordering state, cheese curds, also known as “squeaky cheese,” may require some explanation. Cheese curds are rough little peanut-sized lumps of fresh, young cheese.

Curds are what happens when the cream in milk separates from the watery whey and begins to solidify. The difference between curds and the more commonly consumed blocks of cheese is that hard cheeses are pressed into molds and allowed to age for several weeks or months.

Because they haven’t been pressed or stretched, the curds also contain a higher quantity of air than other cheeses, causing them to squeak when bitten into.

Cheese curds are commonly sold across Canada and the northern United States but can be harder to find the farther you travel from the Canadian border. The specialty cheese section of your supermarket or an upscale grocer may stock them, just ask.

While some decry poutine as mere junk food, its place in the hearts of Canadians, as well as many Americans, is undisputed. The dish even has its own festival during the first week of February each year, with celebrations in Montreal and other major cities across Canada.

Once the province of food trucks and greasy spoon diners, the dish is now experiencing a Renaissance, with poutine-themed restaurants serving gourmet variations, ranging from lobster poutine to Jamaican jerk poutine, and everything in between.

Want to try it? Poutine is easy to make, and if you can’t find fresh cheese curds in your area, you can substitute diced mozzarella. And, of course, with these recipes, you can use packaged french fries, rather than making them from scratch, if you are pressed for time. 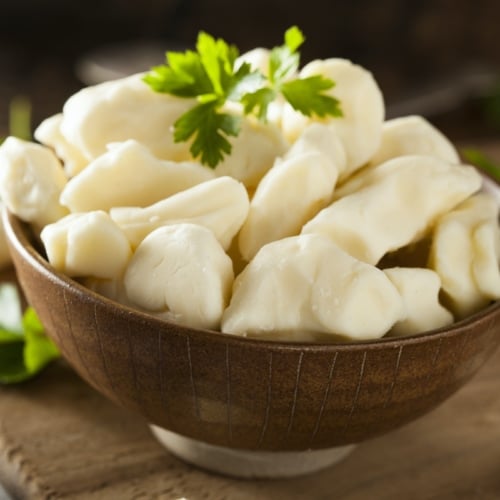 If you can’t make gravy, but have a can or jar in your pantry, simple beef/brown gravy works best, but any kind will do

If you can’t get cheese curd, any chunks of your favorite melty cheese will do. But cheese curds make it authentic.

Keyword poutine recipe, sweet potato poutine montreal
Tried this recipe?Let us know how it was!

Keyword poutine recipe vegetarian, vegan cheese curds
Tried this recipe?Let us know how it was!

The original poutine is acadian and has been around for generations!

The best poutine I ever had was my ex-daughter-in-law’s, who was from New Brunswick and taught me how to make it. The worst I’ve ever had was a restaurant who made it, but they deep-fried the cheese curds and it was nasty!

We eat Poutine- my favorite is the recipe from Le Cellier at Epcot. It is a red wine garlic beef reduction, poured over fresh cut fries and topped with cheese curds and truffle salt. Fantabulous! Our go to for a quick winter hearty simple meal. Paired with a fresh salad it is excellent. Who cares who invented it or whether it is classic? Im no purist- its just delicious!

Ok , the classic maybe , but the other two recipes are just wrong . Im from Québec , where poutine was invented. And its not a Canadian thing. Its a Québec thing. Please dont assume its a national thing. Just like deep dish pizza , it’s not because they make it in an other state that it’s their thing.. thanks

So then McDonald’s is a Californien restaurant? Gumbo is Lousian? No. Both American from different parts of the country. Poutine is a CANADIAN dish that originated in the beautiful Canadian province of Quebec.

Last I checked Quebec is a Canadian province…duh

Poutine was served at my grandson’s wedding for the late snack. It was something very different from sandwiches etc. We thought it was very good, I have never had any before. Someday, I will make the above Classic recipe. This dish is a huge winner in Sudbury, Ontario. We have many different nationalities in our city many French people and nearly everyone eats poutine. It is becoming a favourite in our restaurants.

This is Poutine as Boston Pizza is to actual Italian Pizza. Real Poutine in made in New Brunswick by the Acadians. This is just a slack quick thing, damn good and I like it but has nothing on the real thing.

We used to eat this all the time when I was a kid growing up in the 60’s & 70’s in Oregon…delish!!! Even better with chili and cheese….

My daughter-in-law is from Canada. We had a concession trailer we used at fairs and other occasions. She loved poutines and when she went to visit in Canada, she purchased the gravy mix and we served them like she had back home. Not many people knew what it was, but once they tried it, they were sold on it. We did a good business selling it. After a while, we only eat it occasionally, but we still love it.

You are what you eat. Balance your meal: One carb, one protein; fruit & veggies is a balanced meal. If you eat potatoes, rice or noodles, skip the bread!!!!!

Gross, IMHO! I’ll stick to ketchup for my fries 🙂

Lol… Actually, I prefer BBQ sauce or ranch dressing on my fries!!!

The best Poutine I ever had was at Pecado de Bom in São Paulo, Brazil. The restaurant is owned, prepared and served by Canadians. Super Yum http://www.pecadodebom.com.br which translated means “Sinfully Good” and indeed it is.

Check out our poutines in Sao Paulo, Brazil if you ever get a chance to visit, own and served by Canadians. http://www.pecadodebom.com.br YUMMMMM

One of my family favs–and if in Nova Scotia you have to try the lobster poutine!

That’s not a regional “Southern” thing. That’s pretty much everywhere, at least in the States. Except maybe mixing the cheese in. You could do it if you want after it’s served, but it’s better melted on top.

I have actually had that before! I have also had Almost Famous BBQ and Grills junkyard fries. Delish!!!!

Poutine is awesome. We discovered this dish when we were traveling in Canada. I now make it on occasion but I live to far south to get cheese curds so I use mozzarella or jack cheese. We loved going to KFC or the Swiss Chalet for their poutine, I thought they had the best. 🙂

Oh God. Please don’t use cottage cheese! Totally different thing. Cheese curds are just cheese. Use mozzarella like they said. And for the other lady, it’s supposed to be a beef gravy. The xhicken stock might have been a typo. Use beef stock.

Jamie — this sounds fabulous! Just noticed in the Classic Poutine, the recipe calls for chicken stock, but the directions say “add the beef stock.” Does either work?

Hi Jo, we caught the mistake and changed it to beef stock. You want to use beef gravy but use whatever kind you like best!

I would probably Rather have the chicken stock myself. I don’t really care for beef. I don’t hardly even eat hamburgers because of that! Lol

Hi Ann McKillop, no, you don’t want to use cottage cheese! As the article states, you can substitute mozzarella. Enjoy!

Thanks for the story. This was just mentioned on The Food Network show Chopped-Canada.

Such a contradiction! Food of the gods and a heart attack on a plate all at the same time. It is so delicious!

Fill your home with the warm scent of the holidays with this simmering potpourri. Simply add 2 oranges cut in sections, 1 apple chopped, 1 inch piece of ginger, 1 cup cranberries, 3 cinnamon sticks, and a few small sprigs from your Christmas tree (or use 4 Bay leaves or rosemary sprigs) to 4 cups of water. Simmer on the stovetop or in a slow cooker on low setting for 4-6 hours. Great for parties!
More hints & tips 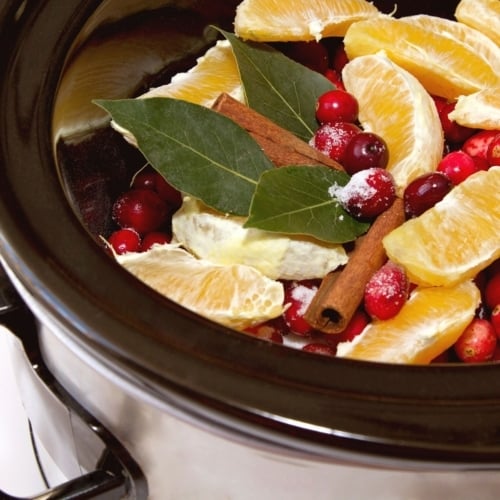