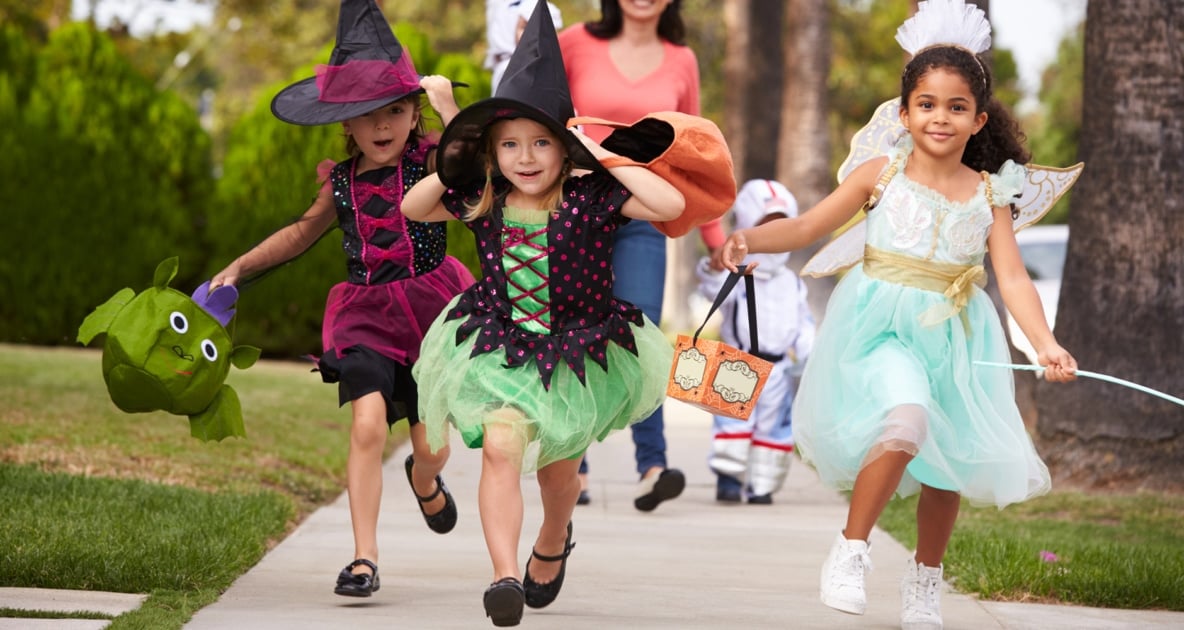 In our 1999 edition, Farmers’ Almanac ran a campaign suggesting that we move Halloween celebrations and trick-or-treating to the last Saturday in October. It’s been 20 years since we proposed the idea, and it’s one we still think makes ghoulishly good sense.

Before you make up your mind yea or nay, read our case as we presented it and share your thoughts with us. We’d love to hear what you think!

Saturday: The Trick To Making Halloween A Real Treat

Witches, ghosts, and goblins may be the first thing you think of when you hear the word “Halloween,” but at Farmers, Almanac we think of family fun.

The traditional celebration of Halloween dates back to when the Celts occupied Europe. During that time, it was believed that dead were free to roam the earth one night a year, usually around the end of October (known also as the pre-Christian Celtic festival of Samhain). Years later, people lit candles and masqueraded in costumes to ward off the spirits. As this tradition continued, the costumed people began knocking on doors, begging for treats in exchange for an evil-free year. Around AD 700, the Christians stepped in to combat this Pagan festival by replacing it with a day to honor saints or “hallowed ones” who had lived good lives. In AD 835, November 1st was designated as All Saints’ Day or All Hallow’s Day. The evening before was called All Hallow’s Eve, thus the name Halloween evolved.

Over the years, many countries absorbed various Halloween festivities and customs into their cultures. The United States and Canada began observing Halloween in the 19th century. Since then, Halloween has become a national observance in both countries. Today, many adults dress up in costumes, go “trick-or-treating” with their children, and enjoy adorning their homes, yards, and offices with Halloween decorations. In fact, more money is spent on Halloween decorations than any other holiday except Christmas.

Because Halloween was originally celebrated the night before All Saints’ Day, November 1st, most of the celebrations have traditionally fallen on October 31st. But, as with other traditions that have been adapted to current society, the Farmers’ Almanac believes that in order to make Halloween (or at least the act of trick-or-treating) safer and more of a family fun day, it should be celebrated on the last Saturday in October, rather than October 31st.

Because no federal or state laws establish the celebration of Halloween, no laws need to be passed or amended to initiate this change. Instead, altering the observance to the last Saturday in October would be a grassroots campaign that could start with city and county councils, and perhaps even with school classrooms.

The Benefits Of Saturday

Think about the advantages that having Saturday trick-or-treating would bring about:

What Do You Think?

Some communities already celebrate trick-or-treating on a different day than October 31st. Does yours? Would your community benefit from having Halloween moved to the last Saturday in October every year? We want to hear your opinions. Share yours in the comments below!

Read: Why do we trick or treat?

i just read this artical for a school discosion

who is the author

always made since to make the last weekend of the month…
After living in Wyoming and not one Halloween without blizzard and miserable cold, hard on kids and limits what costumes can be worn outside , what makes even more since then that is having it a month sooner on the last weekend…
it’s to close to Christmas and this would as well how to fix that…
I been wanting to try for years.

Please change to Saturday, our poor kids are exhausted the day at School

Hi if we still have cove19 in Phoenix. My be put the
Hot air balloon on the durt. Then have each have candy to give out but put a buck on the mear so a person can put candy whilt they drive through.

I don’t mind Halloween on the date on the calendar. When it is a week night then, there seems to not B soooo much menace in our town, because it is a school night or college classes…….I think it is fine just the way it is……..but this is my opinion!

I love Halloween, and people work all kinds of shift…that means nights and weekends also. I think Halloween needs to be left alone, all these re arranged holidays don’t feel like special days….just long weekends for a select group who work Monday thru Friday. Halloween is October 31!!!

The weekend before Halloween is when many adults are out partying, drinking, and with a high potential for driving intoxicated. Why put your kids into that dangerous mix Every Single Year, regardless if you’re driving your kids to a neighborhood or taking them on foot around your own? All us adults, our parents, their parents, all managed to live with it being on the 31st for decades. Kids don’t trick-or-treat forever, it’s a short time span in the big picture. The only way I’d be for it changing to the last Saturday of the month, is if trick-or-treating was 3-5pm or 4-6pm, everywhere, so the kiddos are safely home before dark. And parents in warm climates, put down the wine and beer as you take your kids around your neighborhood. It really looks distasteful, and it sets a bad example for kids.

Leave Halloween and its traditions alone! Not all families have the privilege of having parents that have weekends off so it would mean that EVERY Halloween would be missed by those who work every weekend. Yes, they could call in sick, but if everyone did that who would be working in critical areas? For example, most people sick in a hospital don’t miraculously get better for the holiday and go home so the hospital staff can celebrate the holiday, or the prisoners/mental health patients get to be released for the night in hopes that they dont commit crimes and the mentally ill can handle a night without medications, support or a safe environment, just so the staff can go enjoy the holiday. What about all the convenience services we take for granted ie., gas stations, grocery stores, restaurants, utility companies, news, maintenance crews, ambulances, emergency rooms, etc.? Let all of those businesses close for the holiday so they can celebrate too! The reality of the world is that when Halloween (or any holiday) falls on your day off once or twice in a row, it makes those years even more exciting for the rare occasion. Kids have adjusted to the holiday for generations and survived. Quit creating/empowering the generation of entitlement! Parents need to step up, be parents and not their childrens friends, set expectations and stick to them. How are the younger generations going to learn how to be responsible if they expect society to bend for them when they want? Educate kids on what happens if they stay up late and/or eat too much junk (AKA responsibilities/cause and effect). Let them know that they have to get up and go to school if Halloween is on a school night and be the parent and make them go to bed.. or if it is so important, ask the schools/districts to make the day after Halloween a non school day so it is on the school calendar and arrangements can be made for child care if needed in advance!?

I can’t believe anyone is even considering changing the date. All of the reasons cited for doing so, come down to parents not being committed enough to the safety of their children to become actively involved in it. A little common sense goes a long way. How about actually ACCOMPANYING them when they go trick or treating? Or arming them with flashlights and other means of being more visible? How about actually sitting them down and having that all important conversation about BASIC SAFETY? These are some of the reasons being given. I don’t see any legitimate reason for changing the date, whatsoever. Instead of dumbing down everything to enable those who refuse to think, why aren’t we assisting those who need to smarten up? This is SO typical. NO. Do not change things. It will take away a time honored tradition from those who value it, and simply provide another date for the irresponsible to be irresponsible. Leave it alone!

My daughter was born on Halloween in 1995. We’ve been celebrating her birthday for 22yrs coming up on 23 Wednesday as a Halloween bash. I do not want to see the date change, maybe just celebrate & trick or treat on the last Saturday of October rather than completely change the date. Not only that it’ll never be the same date right!? Just like we willcelebrate someone’s birthday on the weekend before their birthday because it fell on a weekday should be the way this lands as well. Im all for trick or treating changing to a Saturday before but not at all a fan of a total date change.

Hi Tamtam, yes, the proposal is just to move the date of Trick or Treating and festivities, not Halloween itself.

Not all of us working parents are off on Saturday. Where I live, the kids never trick or treat on the 31st anyway. They go out on the 30th unless that falls on Sunday. And Sundays are reserved for church so they always change it to not interfere with that. Moving it to Saturday day wouldn’t really serve a purpose but it would make life a little more simple for some.

Would love to have it moved to a Saturday
…hard on little ones and families. ..working the next day!

Leave it be. It is what it is and as it should be. Stop meddling. I as a child managed just fine and so did my kids,and this was before daylight savings time was moved later in the year. Also anybody willing to walk the walk for candy deserves to get it no matter what the age.

Change It! For all the mentioned reasons. Every family would benefit.

The current western “celebration” has little to do with the original. “Trick or treat” should be moved to the last Saturday(or Friday) in October. It is a festival for children to dress up and enjoy the evening. Little children would benefit from shifting this festival to a Saturday or Friday. This will make no difference to those who feel the 31st has a different meaning.

leave it the way it is

Leave Halloween As It Is period.

NO. Halloween is Halloween. Have parties and bonfires on the weekends, trick or treating on October 31st