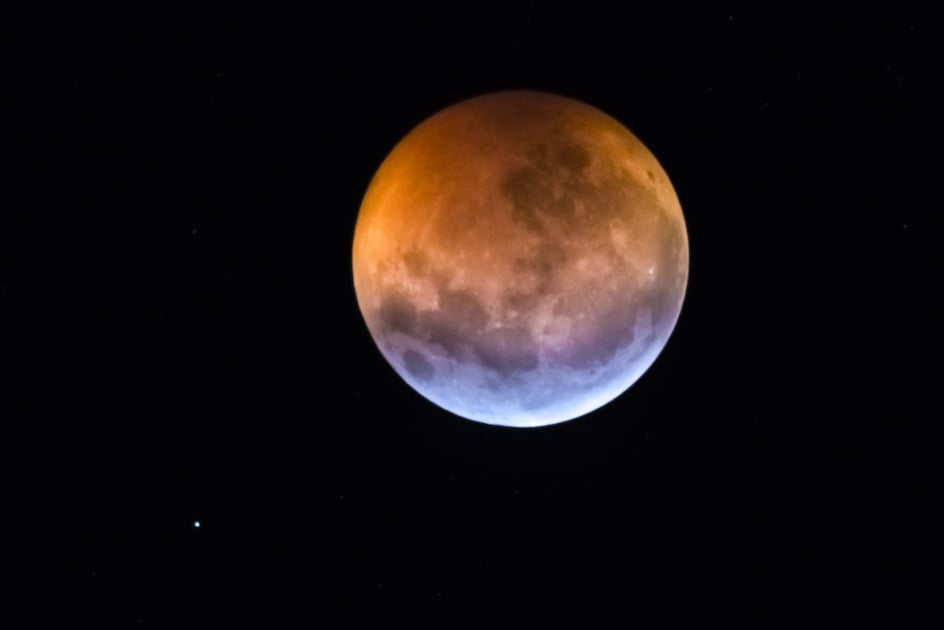 Mark your calendars for the overnight hours of November 18-19, 2021, when this month’s Beaver Moon will be partially eclipsed by the Earth.

North Americans are in a prime position to see this partial lunar eclipse. Across parts of South America, unfortunately, the Moon will set before the eclipse takes place. But for North America, this exciting Moon show will take place in the predawn hours, with the visible stages ending before moonset.

There are three types of lunar eclipses: total, partial, and penumbral. The most dramatic is a total lunar eclipse—when the Earth’s shadow totally covers the Moon. A lunar eclipse can occur only when there is a full Moon.

Look for The “Japanese Lantern” Effect

For this eclipse, the Moon will slide through the southern portion of the Earth’s dark umbra and at mid-eclipse, all but 2.6 percent of the Moon’s diameter will be immersed in the shadow. Because some of the sunlight striking the Earth is diffused and scattered by our atmosphere, the Earth’s shadow is not completely dark.  Enough of this light reaches the Moon to give it a faint coppery glow. Combined with the remaining uneclipsed yellow sliver will create what some call the Japanese Lantern Effect; a strikingly beautiful sight for the naked eye, and especially for those viewing with binoculars or a small telescope.

Below is a timetable covering the various phases. Times given in italics indicate times for late Thursday evening, November 18th.

The Moon’s entry into and exit out of the Earth’s penumbra are unobservable because this shadow is very faint.  However, about 20 minutes before the Moon enters the umbra, a faint, but distinct “smudge” should be visible on the left side of the Moon’s disk. After the Moon leaves the umbra, a similar smudginess or shading should be evident for about 20 minutes on the right side of the Moon’s disk.

See how this eclipse will look from your location!

How Long Will This Eclipse Last?

Normally, for a total eclipse, it takes only about an hour for the Moon to move completely into the Earth’s shadow.  However, for this eclipse, it will take noticeably longer: about 104 minutes from the time the first “bite” by the dark umbral shadow appears on the Moon’s face until virtually the entire disk of the Moon is covered and then another 105 minutes for the last bit of the umbra to exit off of the Moon.  Why? The reason is the Moon will arrive at apogee—that point in its orbit farthest from Earth—on November 20th (when it will be about 252,600 miles away). So, it will be moving slower than normal in its orbit and will take a much longer time to traverse through the Earth’s central shadow.

The very beginning stages of the eclipse will be visible from the United Kingdom and parts of northern Europe just prior to moonset. Eastern Asia and Australia will also see it as the Moon rises later that Friday evening.

Two weeks later, on Saturday, December 4th, a total eclipse of the Sun will take place. But you’ll have to travel to Antarctica to view it!

See our schedule of lunar and solar eclipses for the year here.

Can we see it here in the western part of Africa?

What sky will this be in. East, West, south or North?

Hi Gilda, we’re sorry we didn’t call this out in the story. The full Moon is hard to miss in the sky, and its usual trajectory when it’s full is to move from east to west, just like the sun (but at opposite times). In fact, during the time of a full Moon, once the sun sets, you can turn around and look east and wait for the moon to rise. It sets in the west, and the eclipse occurred right before moonset.

What time will it be at its peak in the Central Time Zone?

The November Eclipse will take place at 3:57AM EST on Nov 19 , so not enough time to go into the next day.

A layer of window screen wire inside the floor register collects little odds and ends that fall through.
More hints & tips