by Joe Rao Updated: May 17, 2022
EmailFacebook6PinterestTwitter 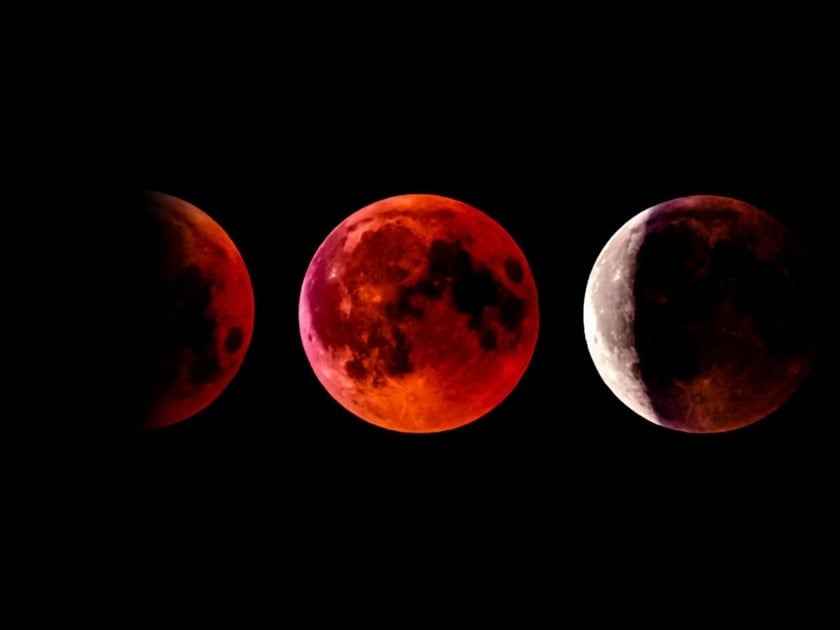 If you would like to attend one of nature’s most interesting celestial performances, mark a date on your calendar for Sunday evening, May 15, 2022, to see a total eclipse of the Moon!

This lunar “show” may be watched most anywhere in North and South America, and it may be observed to full advantage without binoculars or telescopic equipment of any kind. And unlike an eclipse of the Sun, an eclipse of the Moon presents no hazards to viewers; no precautions to protect the eyes are needed.

Below is a timetable for all of the main events of the next lunar eclipse (times listed in italics fall on May 16, 2022):

Earth casts a long, cone-shaped shadow that stretches into space for about 863,000 miles. More often than not, the full Moon passes either above or below this shadow. But on special occasions—when the Sun, Earth, and Moon are properly aligned—the Moon’s path will take it directly into the Earth’s shadow, which causes a lunar eclipse! Learn more about eclipses: dates, myths, and superstitions.

Typically, the amount of time that the Moon spends completely immersed in the Earth’s darkest shadow lasts about 50 minutes or less. But the upcoming eclipse will be unusually long. The Moon will be totally eclipsed for 85 minutes—about the length of a feature film.

When the full Moon enters the Earth’s dark central shadow (umbra), its left edge will appear to crumble away. For the next 61 minutes the Moon will move steadily into the shadow until its last remaining sliver becomes tucked inside the shadow’s outer rim. That will be the start of the “total phase” of the eclipse.

Man In The Moon Gets Red In The Face!

You might expect the Moon to completely disappear from view when it becomes immersed in the Earth’s shadow, but it doesn’t. Instead, during this darkest phase of the eclipse, the Moon glows with an eerie ruddy coloration. Because some of the sunlight striking our Earth is diffused and scattered by our atmosphere, the Earth’s shadow is not totally dark. Near the horizon, at sunrise and sunset we see red and orange colorations. Enough of this light reaches the Moon to give it a faint coppery glow—even when it is totally eclipsed.

Depending on the state of our atmosphere during totality, the Moon might resemble a shiny new penny or glow softly with hues of brick red, or chocolate brown.

Sometimes, however, after a major volcanic eruption, which can fill the upper layers of our atmosphere – the stratosphere – with ash and dust, most of the red and orange light is blocked from entering the Earth’s shadow and the result is that the Moon appears a sooty gray or even nearly disappears completely from view. This has happened in 1963, 1982, and 1992.

For those living to the west or to the left of a line running roughly from Billings, Montana—through Salt Lake City—to San Diego, California, the Moon will rise from above the east-southeast horizon already part-way inside of the umbra—a most unusual sight! If there are local landmarks in the foreground it can make for an interesting photo-op. See the video below for a glimpse of what it might look like:

A Sight For Billions

As many as 2.7 billion people will get a chance to see this month’s eclipse!

To see a total eclipse of the Sun, one must be positioned within the path that the Moon’s dark shadow will take across the surface of the Earth. That path may be thousands of miles long, but usually less than 167 miles wide.

In contrast, a total eclipse of the Moon is visible wherever the Moon happens to be above the horizon when the eclipse is taking place. Since from start to finish, our upcoming eclipse will last nearly three and a half hours, and taking into account the rotation of the Earth on its axis, more than half of the Earth’s surface – the nighttime side – will be facing the Moon during the eclipse. Visibility will include not only the Americas, but also parts of Europe and Africa.

Interestingly, when the Earth’s shadow sweeps across the lunar landscape, the temperatures on the Moon’s surface will drop off rapidly. During a total lunar eclipse in February 1971, scientific instruments left at the Ocean of Storms by astronauts of Apollo 12 and the Fra Mauro Highlands by astronauts of Apollo 14, both registered a sudden and sharp drop in temperature.

The temperature dropped from 162°F just prior to the start of the eclipse, to -153°F during the total phase—a drop of 315°F in only about an hour’s time! Just before the eclipse, the Sun had been shining at almost noontime intensity at both sites. Without an atmosphere to trap the heat, the complete cutting off of sunlight allows whatever heat that had built up on the lunar surface to radiate rapidly out into space.

Initially, it was thought that such a “thermal shock wave” might lead to the cracking of rocks on the surface and the release of gas from within the Moon, as well as damaging the instruments themselves. However this has not been the case.

In addition, lunar eclipses have been of value in past studies of the lunar surface. Through infrared photography, it has been found that certain spots on the Moon’s surface remain relatively warm even as it cools during the eclipse. This suggests that these spots are sites of large chunks of rock that extend well below the surface and bring up heat.

We hope that the weather will cooperate to allow you, as well as members of your family and friends to enjoy this most interesting (and free) celestial event.

Many years ago, just before an eclipse, Dr. Ken Franklin, an astronomer at New York’s Hayden Planetarium took a phone call from someone with a question: “Are you selling tickets for the eclipse?” “No sir,” Dr. Franklin replied. “This sky show is being staged by an independent producer.”

If you can’t stay for the whole show, drop in now and then. This will be the best spectacle of its kind visible in the US before March 14, 2025. (The total eclipse that is scheduled for later this year, on November 8th, will occur during the inconvenient early hours of the morning and will be cut short during totality for the eastern US by the brightening morning twilight skies and moonset).

Indeed, this “sky show” is timeless: Earth’s shadow has darkened the Moon since before Tut was pharaoh, before there were even eyes for looking skyward.

Live Stream Time-lapse Of The Eclipse:

Did you miss the eclipse? Here it is in time-lapse, thanks to Griffith Observatory in Los Angeles:

This is soooo super cool!!!! Thanks so much for sharing this with those of us that find this so fascinating. Our God is an awesome God and his creations are so magnificent. We should be focusing on beautiful & positive things like this and work daily to make our majestic earth the absolute best place it can be. Let’s all work on that.

lets ALL join together to clean up our cities, countryside, our state & National Parks. Our oceans are becoming SO polluted, we MUST ALL protect them for the beautiful mammals, fish, coral for our natural reefs, etc. Our generation MUST act quickly to save our precious resources for future generations!!!

Never lose your car in a parking lot

Use your cell phone to take a picture of the location of your car in the parking lot so you can easily find it after shopping.
More hints & tips 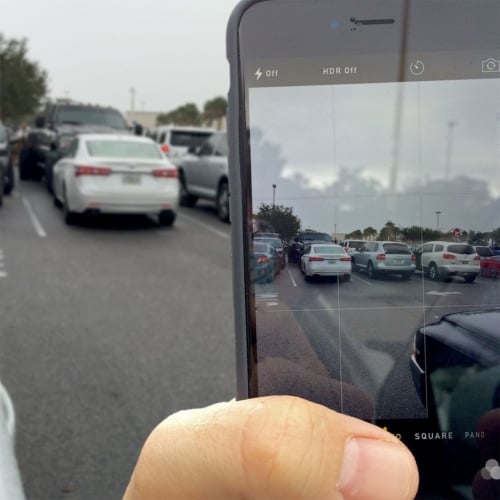