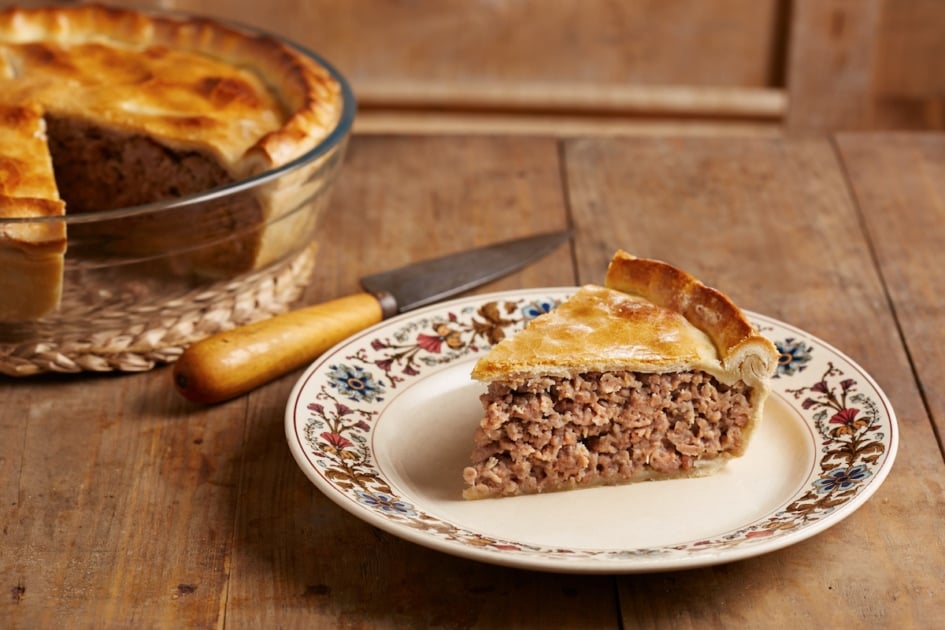 So What Makes This Pie So Popular?

Meat pies have been around in one form or another since at least 1600 B.C. It’s thought that the original tourtière was a dish called “patina,” which was a meat pastry served around 400 A.D. in Europe. Centuries later, when the first French settlers came to Canada, they brought meat pie recipes with them, including tourtière.

The name comes from the word tourte, which has two translations: pie and passenger pigeon. Perhaps the name is in part a reference to the pigeons that were plentiful and easily trapped by Canadian settlers, who then made the meat into pies.

Regardless, the tourtière that we know today was first written about in the 1840 French-Canadian cookbook, La Cuisiniere Canadienne. Historians believe that this was the first French cookbook published in Canada, and it described the tourtière as “a meat pie made with pork, veal, mutton, chicken and potatoes, each cooked in their own spices before being chopped into tiny pieces and baked in a double-crusted pie.”

From there, the tourtière became a cultural phenomenon, with regions of Canada each boasting their own versions of the pie. There are many variations—as one French baker says, “there are as many recipes for tourtière as there are cooks in Quebec.” Families have their own “secret ingredients,” and cooking methods. For instance, the Montreal tourtière features pork only, while the Manitoban version can have a variety of meats, including wild game. In Acadia, tourtière can have beef, chicken, and rabbit.

Make Your Own Pork Pie Tourtière

You can make your own flaky pie crust or use a shortcut and purchase crust for a deep-dish double-crust pie. But if you are making your own pork pie, a tourtière crust should be rich and buttery, which is why the traditional recipe calls for both butter and lard — butter to add richness and lard because historically, butter was hard to come by in large quantities. 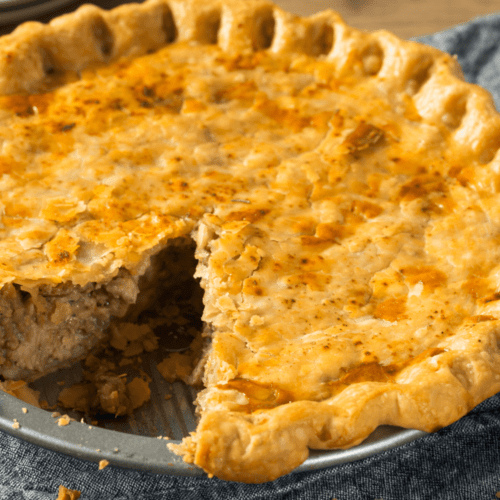 Make Your Own Pork Pie Tourtière

Divide the dough into two balls, then roll one ball out on a floured board to fit a 9-inch deep dish pie pan.

For the egg wash:

Keyword pork pie recipe, spiced meat pie recipe
Tried this recipe?Let us know how it was!

We want to know: How do you serve and eat your tourtière? Any condiments? Tell us in the comments below.

This was a tradition growing up. Memere always brought over two tortiere (toot-chay) pies or as my siblings called it “torture pie”. We ate these on Christmas Eve after coming home from Mass. There was no garlic in her recipe (an extravagance for her) and very few spices that I recall. We did not use condiments other than spreading butter on top and then lifting the top crust and spreading butter underneath…mmm. Lots of good memories.

What a wonderful memory. Isn’t it wonderful what a role food can play in our lives?

I used to cook at a small neighborhood grocery store in MA, and we made these all year. I’d buy a pie, but I’d also buy a container of just the filling, and make a biscuit dough, press/roll into a rectangle, spread the filling, then roll up jelly roll style and bake. Makes my mouth water remembering how good it was all those years ago.

My people are from New Brunswick. We make the pies with beef and pork. Served with ketchup and sweet gerkins.

Everyone in the family loves this. I make it every year from my sister-in-laws recipe. Spices are cinnamon , cloves and allspice and always served with maple syrup poured over the top. Every family’s recipe was a little different. French Canadian Family and they always pronounced it the same as Zoe Bartholomews family.

Maple syrup??! Game changer! Grew up in Maine and had it as a gift from my husband’s co-worker. Also pronounced the same way. I use the recipe from Downeast magazine.

Both my parents were French Canadian. Beaulieu and Deschenes. My mother, aunts and grandmothers made this meat pie for Christmas Eve. No garlic. Just pork potato onion and above mentioned spices. Delish! My mother spoke broken English but pronounced it Toot-Shay or very clise to it. Toot as in foot.

I grew on on these
M6 father made 20 to 25 every Christmas. Ketchup is the only store bought condiment,and moms homemade green relish was the only homemade condiment
Our family recipe is slightly different and prepared differently but I would assume same taste

Does anyone have a recipe for Maple Walnut Cream Pie. It is thick like custard. ( Not syrup like pecan pie ) Mostly found in dinners I don’t think it is baked. Thank You

Does anyone out there have the recipe for “Sugar Pie”, another Christmas treat among
the French Canadians. It too is delicious, and I’ve lost the recipe given to me by a
much loved friend and avid family baker many years ago. Thank you in advance.

This is so good its the best, it reminds me of my grandmother and my mother making them. We eat year round. Yum Yum.

Tourtière is just the best ever meat pie alright, but you’ve got the pronunciation wrong. It’s actually pronounced “tore – ti – AIR”…..accent on the last syllable.

Thanks, birdonthewire, we adjusted the pronunciation – thank you!

I am going to have to try this recipe. Both my Mom and I were born in Canada and she use to make meat pies around Christmas time. Been a few years I will have to make one for my family. Thanks for the memories.

Need a tough scrubber for tough stains and spills? Sprinkle salt over the dirty area then scrub with a damp sponge. Works like a charm on soap scum and caked-on globs of toothpaste. Plus, no toxic chemicals!
More hints & tips 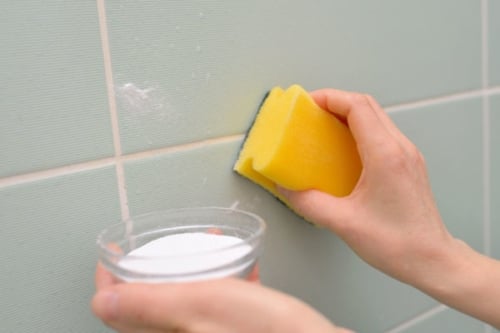