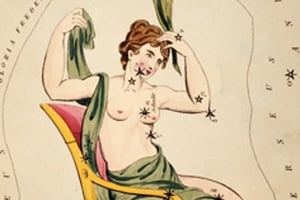 Cassiopeia was one of the original 48 constellations cataloged by the Second Century Greek astronomer Ptolemy, and is still one of 88 officially recognized modern constellations. It sits on the south side of the sky in the Northern Hemisphere, near Camelopardalis, Cepheus, Lacerta, Perseus, and Andromeda and across from the Big Dipper.

The constellation is easy to find due to its brilliance and simple shape: a letter W. In all, the constellation contains 53 known stars, only five of which make up the W. It contains only two Messier objects, bright deep sky objects identified primarily by French astronomer Charles Messier during the 18th Century: open clusters M52 and M103. It is interesting, however, for containing Cassiopeia A, a supernova that only became visible on Earth around 300 years ago.

Like most of the old constellations, Cassiopeia takes its name from Greek mythology. It is said to represent a sitting woman, namely Cassiopeia wife of King Cepheus of Ethiopia and mother of Andromeda, whose own constellations sit next to hers in the sky. Cassiopeia was said to be vain and boastful about her immense beauty, so much so that she claimed to be even more beautiful than the Nereids, the daughters of the sea-god Poseidon. To punish Cassiopeia for her vanity, Poseidon chained Andromeda to a rock to be devoured by a sea monster.

Luckily, the hero Perseus intervened. He struck a deal with Cepheus and Cassiopeia that if he saved Andromeda from the monster, he would win the right to marry her. Perseus fought off the monster and was set to wed the girl. During the wedding, however, Perseus learned that Andromeda had already been promised to another man, named Phineus.

Now that their daughter was safe and sound, Cepheus and Cassiopeia forgot their promise to Perseus and sided with Phineus. A great battle began between Perseus and the supporters of Phineus. Outnumbered, Perseus used a very special weapon to overcome his enemies. He removed the head of Medusa — a snake-haired monster he had slain – from the bag where he kept it. Medusa’s gaze instantly turned all who entered it into stone. Cepheus and Cassiopeia died and were immortalized in the stars by the gods, though Cassiopeia was placed upside-down for half of the year to temper her vanity.