Do you know which spices in your kitchen cabinet can relieve an upset stomach, nausea, morning sickness, or a toothache? These 5 popular culinary spices not only enhance the flavor of our foods but also have healing properties and medicinal benefits. Try our ideas for adding these health- and flavor-enhancing culinary spices to your meals and beverages.

Turmeric comes from the root of a perennial plant in the ginger family and is native to China. The rhizomes are sun-dried and ground.  It has a pungent, ginger-pepper flavor. It is used extensively in Indian cooking and medicinally in traditional Chinese and Indian medicine. Turmeric powder is used commercially in prepared mustards, curry powder, dressings, cheeses, and butter. The healing properties of this spice are largely attributed to its high curcumin content. It is a powerful antioxidant, and natural antibiotic that boosts the immune system and protects against cancer, and liver and lung damage. Its anti-inflammatory properties are extremely helpful at reducing the inflammation and pain associated with all types of arthritis including rheumatoid arthritis. It also stimulates circulation.

Cinnamon is one of the most versatile and popular spices in the world.  It comes from the peeled and dried bark of a species of the evergreen tree that belongs to the genus Cinnamomum. Cinnamon is available in sticks, ground, and distilled into essential oil. Cinnamon has been a valued commodity since ancient biblical times. Most of the cinnamon we consume comes from Sri Lanka. Cinnamon has a wonderful fragrance and flavor, but it also has nutritional and health benefits. It is rich in antioxidants, helps regulate blood sugar levels which can help prevent or improve diabetes. It assists in the proper digestion of food and contains anti-inflammatory properties which help heal digestive disorders as well as joint and arthritic pain. It also boosts metabolism for weight loss. To curb your appetite add a cinnamon stick to a glass of water or tea and sip between meals.

Ground cinnamon can be sprinkled on baked sweet potatoes with honey butter, in fruit salads, applesauce, and yogurt, over hot beverages, in pancake or muffin batter, pies, and lamb stew.

The French word for cloves, clou, translates to “nails”—whole cloves resemble small nails but they are actually the dried, aromatic flower bud of a tropical, evergreen tree grown and harvested in Indonesia, India, Sri Lanka, Pakistan, Tanzania, Zanzibar, and Madagascar. Cloves are available whole or ground and can also be distilled into essential oil for medicinal and aromatherapy uses. Cloves are one of the strongest flavored and most aromatic spices. They are a powerful antioxidant that has been used for centuries as a natural remedy.  Cloves aid digestion, relieve an upset stomach and alleviate intestinal parasites. They also make a good anesthetic for toothaches—simply place a clove where the toothache is for a slight numbing sensation.

Ground cloves are used often in desserts and baked goods. Stir a pinch of ground cloves into glazed carrots, mashed sweet potatoes, chili, fruit salads, or a pot of tea.

Cayenne is a very hot spice that comes from ground and dried hot, red peppers. Columbus introduced Europe to red hot peppers after discovering them in Cuba. Cayenne has anti-inflammatory and anti-irritant properties and contains vitamin E, which works to prevent cancer, colon disorders, and heart problems. It promotes good circulation and digestion. It also promotes weight loss as it helps burn fat, curb the appetite, and boost metabolism. It is also helpful in ridding the body of cold and flu symptoms as it works to break up and expel mucous. For therapeutic benefits add a pinch of ground cayenne to a glass of lemon water and drink daily.

Ginger is a favorite spice used in Asian cuisines. It comes from the rhizomes—the underground root of the ginger plant. The dried root is available whole, ground, or distilled into an essential oil. It is native to Southeast Asia and is also grown in Jamaica. Ginger has a spicy hot, yet sweet flavor, making it versatile to cook with.

Shelley From Fun Ways to Heal

Slices of fresh ginger in a glass of water kicks nausea to the curb every single time! I have Fibromyalgia and ginger has helped me eliminate one of the pharmaceuticals from what was an ever growing list of daily pills. Now thanks to experimenting with natural home remedies my list of prescription drugs is shrinking. Spices and herbs are playing an important and fun part in my healing process. Thank you for sharing such valuable spicy info with us.

Coconut oil, all natural organic, I add a tablespoon to a cup of coffee every morning, I have always had problems with constipation, not anymore and it is the best massage oil you can find, washes right out of your bed linens, leaves no stains! Good fats combat bad fats, this has brought my cholesterol levels to normal, without medication as well. With cold pressed flax seed oil, it delivers a big punch to bad fat and cholesterol & triglycerides. best face oil and make up remover you can use, and for all over dry skin it will kick it in the butt fast. I use coconut oil and baking soda with a touch of peppermint, for my toothpaste due to Thyroid I can not use fluoride. toothpaste so I make my on 🙂

So informative, thank you! Next lockdown shop!

Hi…I was wondering if you could tell me just how much fresh ginger you need for it’s health effects to really work….for example, to help nausea or to cleanse the colon?

i love cinniamon and i like to add ginger to some of my dishes ,did not realize how good they are for you

I really am glad you gave this good information out to us!.

i love spices .i really like cinnamon, garlic, onion, …….

I will have try this.

Never have used herbs and spices all that much. Just beginning to learn how much flavor there is to be had.

I too have read about the combination of the black pepper with the Turmeric,helping to make
the absorption into your body medicinally better.However I would think that with consistant
daily use with or without the black pepper there would be still be some medicinal benefit
to use these spices.

As a chef and caterer I use all of these to add great taste to alot of foods served at our catered
events.But also over the years I have read many articles about the medicinaly preventive
qualities of these herbs and spices,and have incorporated them into my everyday eating habits.
Starting the day with a jacked up bowl of oatmeal including a shake of Turmeric,Cinnamon,and
fresh grated Ginger,Walnuts,Blueberries,Raisins and Bannana,Honey,Wheat Germ,Flax Seed and a Dollop of Greek Yogurt powers me through the day like you would not believe,
and helps to protect my health everyday.

This is good to know!

In order for turmeric to be used medicinally and effectively…black pepper and a fat must be taken with it.

Make Your Own Apple Pie Spice 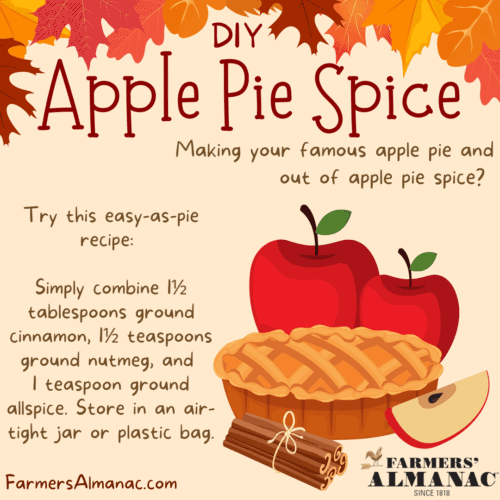