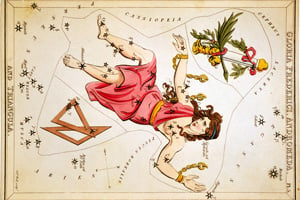 Andromeda was one of the original 48 constellations cataloged by the Second Century Greek astronomer Ptolemy, and is still one of 88 officially recognized modern constellations. It sits on the south side of the sky in the Northern Hemisphere, near Perseus, Cassiopeia, Lacerta, Pegasus, Pisces, and Triangulum.

In all, the constellation contains 65 known stars, 18 of which make up its shape. The most prominent is Alpheratz (also known as Sirrah), the brightest star in the constellation. Other named stars include Mirach, Almach, and Adhil.

Andromeda contains only three Messier objects, bright deep sky objects identified primarily by French astronomer Charles Messier during the 18th Century. The most famous of these is M31, the Andromeda Galaxy, which was named for the constellation. It is one of the most distant naked-eye objects in the night sky. The other two, M32 and M110, are both elliptical galaxies and satellites of the Andromeda Galaxy.

Andromeda takes its name from Greek mythology. It is said to represent a beautiful young woman bound with chains. Andromeda was the daughter of King Cepheus and Queen Cassiopeia. The gods chained her to a rock to be devoured by a sea monster as a punishment to Cassiopeia, who was so vain and boastful about her immense beauty that she claimed to be even more beautiful than the Nereids, the daughters of the sea-god Poseidon.

Luckily for Andromeda, the hero Perseus intervened. He struck a deal with Cepheus and Cassiopeia that if he saved Andromeda from the monster, he would win the right to marry her. Perseus fought off the monster and, after also fighting her former fiancé at the wedding, married Andromeda. They lived, more or less, happily ever after, and when they died, the goddess Athena placed them in the sky together.

Always like to read the strange science & happening in the almanac….

To keep mosquitos and other biting insects at bay, tuck a few new/unused dryer sheets into your pockets.
More hints & tips 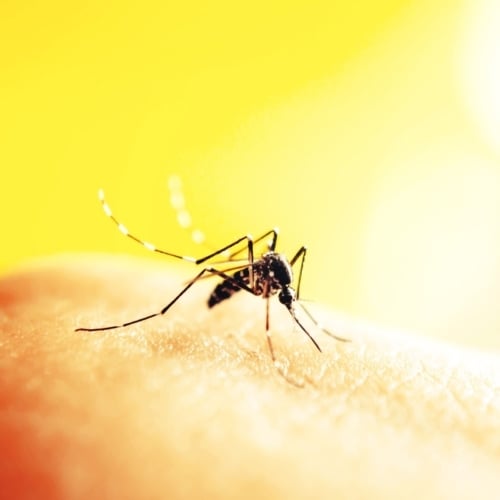