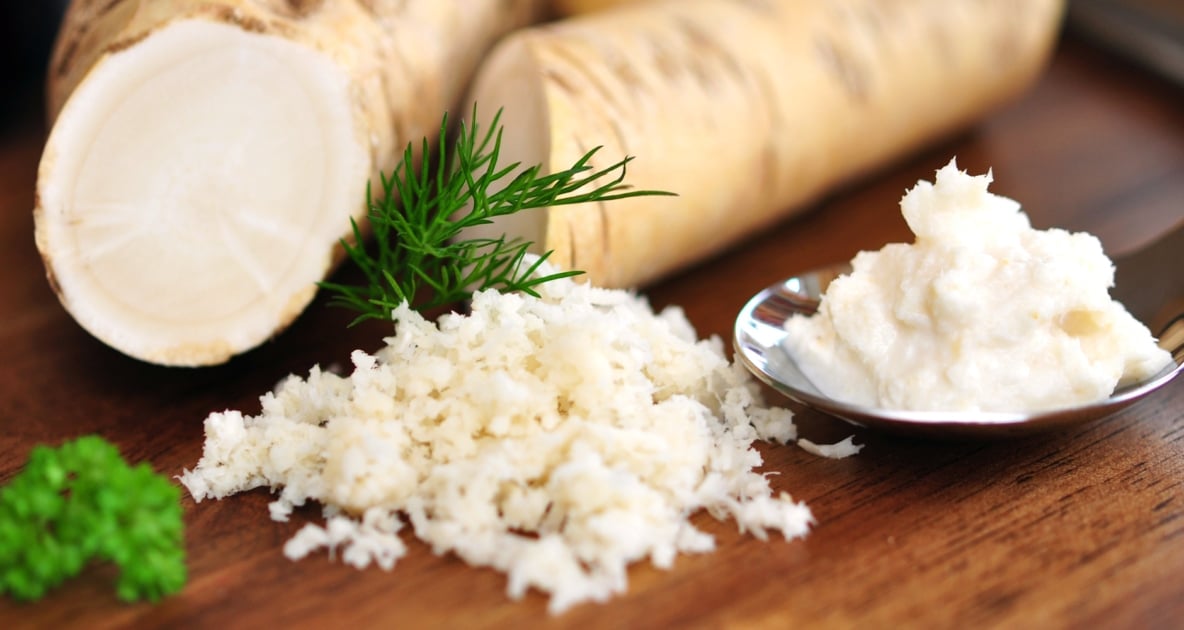 Horseradish has been revered medicinally in home remedies and in culinary dishes for centuries. In fact, ancient Greek mythology referenced horseradish as being worth its weight in gold. It is a vegetable that’s in the same plant family as mustard, broccoli, cabbage, and wasabi. Although the leaves are edible, it’s the horseradish root that is most commonly used to spice up foods.  So what does this unsung hero in the cruciferous vegetable family offer in the way of health?

Horseradish is rich in calcium, potassium, and vitamins B1 and B2, plus it contains powerful antioxidants and natural antibiotic properties that work to eliminate toxins and infection, and to relieve sinus discomfort and respiratory illness.

A University of Illinois anticancer study has found that horseradish contains more than 10 times the amount of cancer-preventing glucosinolates than broccoli. And a quarter cup serving contains a mere 29 calories, 7 grams of carbohydrate, 2 grams of protein, and less than a half a gram of fat.

Horseradish is a traditional Central and Eastern European food, served for centuries in Poland, Lithuania, Czech Republic, Russia, Hungary, Romania, Bulgaria, Southern Germany, Serbia, Croatia, and in various regions of Italy, before it was introduced to England and the Western hemisphere. According to Susan R. Friedland, author of The Passover Table, grated horseradish is part of the Jewish Seder plate, served with gefilte fish and brisket during the week of Passover.

Fresh horseradish is peeled and grated and served either plain, or mixed with white vinegar, salt, and sugar. In Poland, a red horseradish variation is made by adding beets or beet juice. In Southern Germany, horseradish is served in a lingonberry dip at traditional wedding dinners with cooked beef.

Horseradish is an ingredient in commercially bottled spicy mustards and mayonnaise and it is what gives cocktail sauce its tangy flavor. It also gives that spicy bite to Bloody Marys. Prepared horseradish can also be served with fresh oysters on the half shell or in a sauce with roast beef, fish, or lamb. Try grating some in with your favorite coleslaw recipe for added zing!

Where To Buy Horseradish

You can buy fresh horseradish root in most specialty or health food supermarkets. Ask your grocer about availability. Prepared horseradish is widely available in grocery stores, but may not be as tasty or spicy as freshly grated. 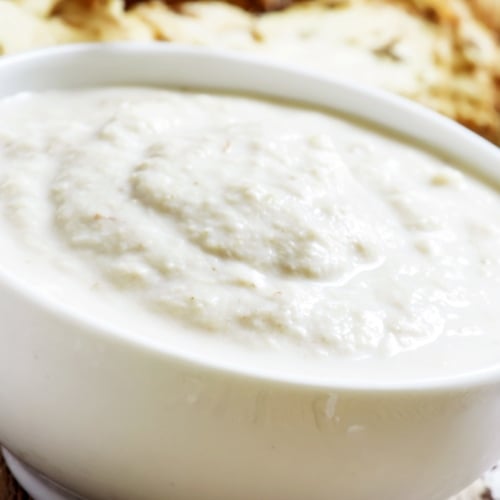 Keyword Horseradish Mayonnaise, Mayonnaise (Blender Recipe)
Tried this recipe?Let us know how it was!

I have 2 patches.i dig one in the spring and the other one in the fall.all my friends enjoy it so when I grind it I always have enough for everyone to get some

Many years ago when we would visit our Gram at their week end farm in NH my mother would make horseradish sauce from the large wild field of it that grew over the old cesspool we would use it all year. By the end of the year it was so strong when you opened the jar it would make your eyes water.

Is there a certain time to dig up roots to make horseradish ? I have always dig it up in a month that has a “R” in it.Has anybody heard this before or can I dig it anytime ??

I have a big patch growing in a spring water fed ditch beside my property. No problem with it taking over, it’s multiplying by growing up the ditch. Come spring time I have a few friends come and get some, replanting the tops at the top of the ditch. It’s a must in our Polish family at Easter time. I just learned a few years ago the tops are edible, even tho I have been eating all my life. I’ve made the greens with some pepper corn beacon, garlic, a tad of raw honey with a splash of cider vinegar and salt to taste. It’s a tasty refreshing dish, best when the leaves are about medium growth. Loved the idea of putting the in pickles, sure will try that this year thanks. Hit me up if you want fresh root in the spring, I have plenty ! LOL 😀

Love horseradish. Surprisingly, I have no trouble digesting horseradish, but red pepper is absolutely deadly for me!

Where is the best place to plant the roots, sun, shade, sandy ground or what

If you want to contain your horseradish that you decide to grow, plant it in a container. It will need to be 2-3 feet long and 1-2 feet deep. This will keep it from taking over your garden. Hope this helps someone.

love this stuff thanks to my papa, when i got older i put the leaves in my dill pickles i canned also is my secret ingred. in my deviled eggs/

EASY to grow; however, consider that you will (likely) never get it out of your garden. It will likely be ‘here to stay’. That said, it will always be in my garden and fridge. Many recipes online so choose wisely. I would love to know more about how to prepare the leaves.

My husband and I love horseradish on our sandwiches, burgers, and roast beef. Didn’t know it was so good for you too! Thanks.

My mom grows and makes her own homemade horseradish, so yummy! I put a Tbsp in my homemade hamburgers.

We love horseradish in our house. It’s the “secret” ingredient in many of my revamped hand-me-down family recipes. I’d love to grow it myself and I think I will put it into the layout for this years garden.

Reuse those tubes this gardening season! Cut four slits at one end and fold them in to close up the bottom. Then fill with soil and plant your seeds. Place on a tray in a warm spot away from drafts. Because the cardboard is biodegradable, you can put the pots directly into the ground when you’re ready to plant! (Just make a couple of slits along the side so the roots can spread).
More hints & tips 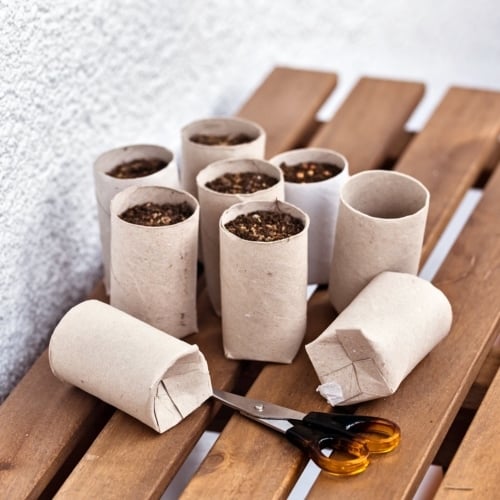