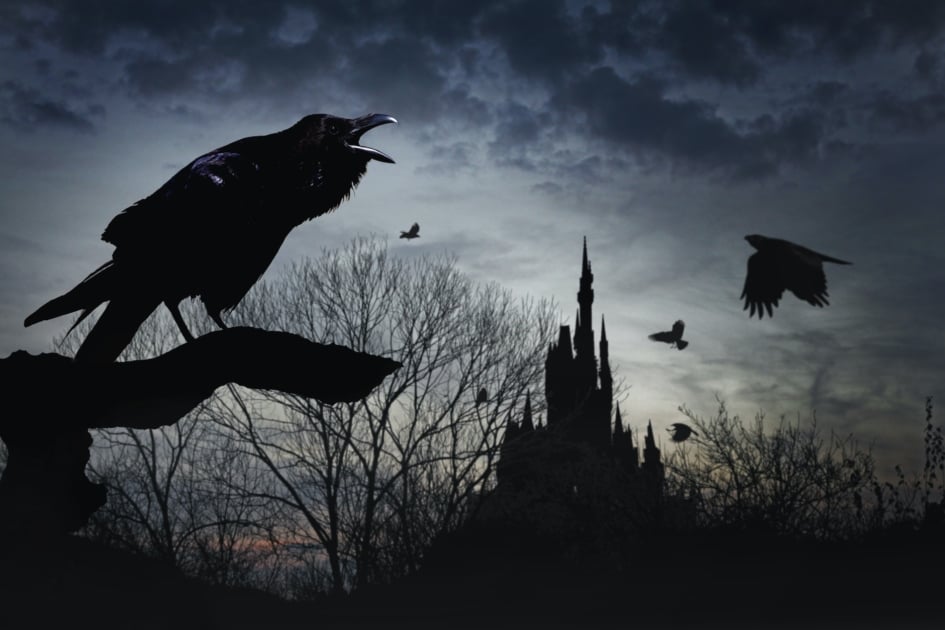 The dark, mysterious raven has been depicted in literature and legends through the ages. In some parts of the world the raven is a sign of death or misfortune; to others its presence indicates good fortune. We shed some light on this mystifying creature and reveal some facts you may not have known.

The raven is a symbolic figure in numerous Native American legends. In some indigenous groups, tales portray the raven as being mischievous and an evil omen. In the Pacific Northwest, Native American mythology depicts the raven in a positive light, as being the creator of the world.

What’s the Difference Between Ravens and Crows?

Although both are members of the “Corvus” genus, and can be found throughout North America and other parts of the world, there are notable differences between ravens and crows:

Ravens have been kept at the site of the Tower of London for centuries to bring it good luck and to prevent disaster. The appointed Ravenmaster, at the expense of the British government, hand rears young raven fledglings: feeding, caring and taming them. He clips one of its wings to keep the ravens from flying away from the tower site.

In several passages of the Bible, ravens were specifically noted to perform important tasks. In the book of Genesis, Noah first sent a raven from the ark to determine if the floodwaters had receded. In the book of I Kings, ravens were commanded by God to bring bread and meat to the prophet Elijah twice a day during a time of drought.
All these things point to one fact, the raven is truly a remarkable bird.

We just moved to our place near Yosemite in CA. We have Ravens that fly around & we started feeding them. We give them boneless chicken, a chicken egg & fresh raw meatballs. We place on a rock & he/she comes around 11am each morning and takes the food; sometimes eats a bit & other times taking it to the nest? The raven does a hoppy dance thing before taking the food & we wonder why…also if other predators come we chase them away so they don’t take the food first. If we put it out late, we see the raven flying about, seemingly waiting for brunch! Anyway, we love our raven; maybe someday we will be gifted.

I have a pair of ravens that are sleeping in my barn. I believe it is a convenient and close for them to steal the duck eggs from the pond area and feed on the horse manure. Not sure whether I want them there or not. Every now and again I will lose a duck too, not sure whether the ravens are the killers or the resident eagle…………. but the ravens are the ones that get caught ravaging the carcass. Any suggestions.

I found a injured young raven in July of 2019. He couldn’t fly..not sure if it was his wing or rib that was messed up..i was at a busy casino. I had given him ice and some cracker pieces. He was breathing hard and panting. I debated for several hours..not wanting to mess with nature. but asked him if he wanted to come.with me. My husband was tired of it. Grabbed a box and put him in it. I raise peacocks about 44 of them. Blues, whites, pied, green. Some are free range. I have learned the whites do not well free because the other birds beat them up and pick on them. So i bring the raven home, put him in a standard peacock coop..(which he hates)(he is terrified..every time I come near it he almost wounds himself in the chicken wire to get away. I opened the door to his pen about 5 months later when I saw him fly inside the pen. He stayed around as a free bird.I would say “where is my raven?” When i fed my peacocks and he would come walking…trying to fit in…while being shooed away by other birds. He became more confident and pushed his way through the pecking order..One day 2.more ravens showed up…I am assuming these are females. I had a wounded expensive white female pied peahen in a coop. She had a heat lamp and i gave her extra attention and made sure she ate every day..I have a bunch of animals, 3 kids and own a shop so I am usually in a hurry. My son called me one day and told me she had died. I asked how and he said he thought the cats did it. I thought very strange and when i came home looked at hours of footage on the security cameras. I couldn’t believe it but saw the raven find an open slot in her coop and slaughter her for about 45 minutes. Peacocks are pretty large birds..The other day when I went to feed, i found my favorite male pied peacock Bruce slaughtered and licked clean.I am blown away..this also happened in a blind spot so the camera didn’t catch anything. I think it was the OTHER raven and not my raven but we cannot do this anymore. Peacocks are easy, beautiful, mild tempered creatures. I can’t let anything terrorize and kill them. Has anyone ever heard of a raven killing a bird as large as a peacock?

Hi Leah, wow, such a sad story. Here you were trying to something nice and it didn’t turn out well. We haven’t heard of this behavior, but perhaps a specialist might know. It’s always wise to call Animal Control if you find an injured wild animal. You just never know.

Come to Interior Alaska. We have ravens and finches year round and jays in May-July all through the towns. They are everywhere.

Well written article. From experience, I believe #3 and #4 feed another trait I see ravens do a lot, and that is curiosity worse than a cat. Starting a couple of years ago, there was this larger older raven that will sit on the poles and trees around my house, hold raven-to-human conversations with me, my wife, my neighbors, come down to see what we’re doing inside our houses, and even went in my neighbor’s entry way.

I am fascinated with this bird but would love for someone to tell me is it good luck or bad luck God knows I dont need anymore bad…..I wanted to get a car decal with the bird and the word “Nevermore”

Hi Margaret, we found some information for you on raven symbolism: https://corbiemitleid.com/divination/spirit-guides/are-ravens-good-omens-or-bad-omens/

I never knew that ravens can be used as pets

I always thought ravens never existed but a friend showed me a picture i just thought …. pure evil animal…. but this shed much light on a amazing bird.

If you have problems with pest birds such as ravens go see island falconry online its such a good experience!

I have had what had what I thought were crows in my yard, making lots of noise. They call out when me and my dog are walking. I talk back to them now. But this description that I just read is telling me that what I have been seeing are Ravens. Awesome. Are they good or bad luck? I hope good. I enjoy them around my house and neighborhood. We do have the smaller black birds, cawing. So those are the crows?
I have enjoyed reading your article. It has been helpful. Thank you, Patricia

A Ravens Beak is Black, while the Crows beak is yellow.

We have Ravens all around us in the High Desert of Southern CA. and I have been attacked by a Raven while doing physical therapy in my swimming pool well to protect myself I had to use my noodle to defend myself and he got a wing broken and I got out of the pool and went to get my husband and he chased it out of the yard and in mean time his family was yelling at us and flying over our yard not happy and I am terrified of Ravens now. They are evil

As a child my brothers shot a mama raven. My dad was duly upset with them. He made them climb the tree and take the babies home to care for as if they were mama. One of the chicks decided to stay with us as none of them were ever caged on our little ranch. Pete as he was called was truly an adventure. Thank you for your article.

As a child my brothers shot a mama raven. My dad was duly upset with them he made them climb the tree and take the babies home to care for as their mama. One of the chicks decided to stay with us as none of them were ever caged on our little ranch. Pete as he was called was truly an adventure. Thank you for your article.

Walking to work one morning a crow dropped a pink quartz cross at my feet.I noticed them after that.

That’s pretty cool. I read an article recently about ravens/crows leaving gifts for people. After a quick ask.com search I found that they may do this to give thanks for feeding them. I think the symbolism is in line with some spiritual meaning. There are a couple of interpretations of the spiritual meanings of crows and ravens. And I know that rose/rose quartz is a healing stone. Relationships, love etc. Whatever speaks to you! Still very cool!

Have found ravens to be fascinating in their actions and beautiful to look at when they walk so stately and the sun shines on their glossy black feathers. For several years I placed food scraps out on top of our sand mound for them so I could watch from my kitchen window as they devoured all that I put out for them. I can no longer do that due to physical limitations at age 90. During that time, when I would get in my car to go somewhere, they signaled each other with calls, and again when I returned, I could hear them doing so again, apparently anticipating the scraps I would be placing for them! There was a pair for several years, and then a third one joined them. I think it was one of their babies. I loved them and thought of them as a special gift. I see them occasionally now but they don’t land where I can see them walking which I so enjoyed.

Thank you, I love reading your article.

Another appearance of the Raven in myth comes from the Norse: the principal diety, Odin, has two ravens, Hugin and Munin, thought and memory, which fly through the world each day and come back in the evening to tell Odin all that they saw.

Excellent. Thank you very much. I’ve always been fascinated by both crows and ravens.

If you purchase cilantro from the supermarket or farmers' market, try this trick to keep it fresher longer: Untie the bunch and spread the leaves and stems out on a few dry paper towels. Allow to air dry for 10 minutes, then roll them up in the paper towel and store in a sealable plastic bag. They'll keep for up to a month.
More hints & tips