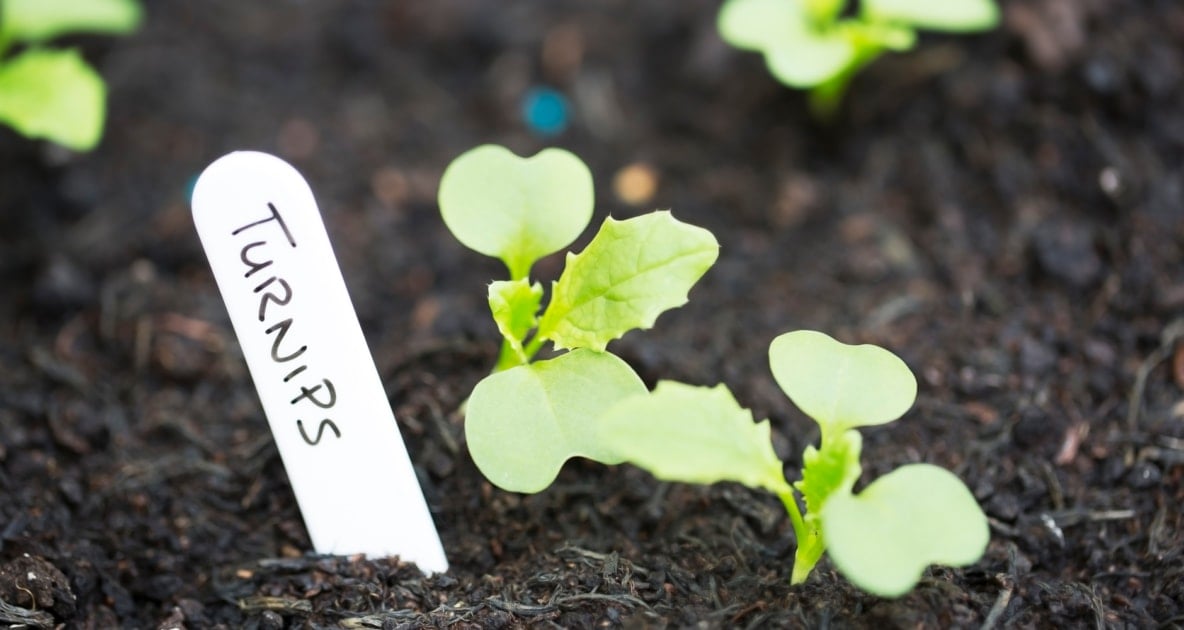 As more people strive to eat locally and seasonally, home gardeners are becoming more aware of how to take advantage of the seemingly forgotten gardening seasons of fall and winter. By knowing what to plant, when to plant, and how to care for the crops, you may not have to rely on out-of-state produce. So is it too late to get started planting a few crops? It’s not! While spring and summer get all the glory in the garden, there are many veggies you can grow to harvest

The Appeal of Late-Season Gardening

There are benefits to planting late in the season not realized earlier in the year. “In the early fall you see a decline in the pest culprits that cause frustration for many gardeners,” says Noah Wentworth of Finklepod Farm in Arundel, Maine. “You don’t deal with nearly the same pest pressure.”

Although all pests aren’t eliminated, the life cycle of many of them is at a point where there aren’t the larvae, or at least as much, to feed on plants.

Another perk is the weed situation. There will be perennial weeds for some time into the fall, but they don’t grow at the same rate. In the spring, it seems that as soon as you weed there are more growing, a never-ending chore. But in the fall, it’s much easier to stay on top of them.

Tomatoes, squash, and peppers are not good choices for the cooler gardening season. Most greens are hardy as well as some cabbage varieties, and root vegetables are always good options.

If you want to have fresh vegetables in the fall and the winter, you need to plant while the weather is still warm. A common mistake is pulling out the summer vegetables after a freeze, and then seeding the carrots, greens, and other cool season crops. While some vegetables might produce before the extreme cold settles in, more likely than not you’ll be disappointed. To make sure the plants grow enough to keep you supplied with fresh vegetables, you need to time the planting dates to give the plants plenty of time to reach a harvestable size.

To determine the right date, know how long it takes the plant to mature, and then count backward from your traditional first frost date. For example, spinach typically takes 28 days from germination to be large enough to eat. If your first frost date is October 15, you’ll want to plant the spinach seeds around the first week of September to give it enough time to grow.

Because many of us still experience temperatures in the 80s and 90s even in September, the soil is often warmer than desired. This can make germination a challenge since many of these traditionally cool season varieties don’t germinate well in warm soil. In order to create better conditions, utilize the shade of taller plants, or cover a bed with straw for at least a week prior to planting.

While most cold season crops can be seeded, some are more successful if you set them out as transplants. With the increasing popularity of growing vegetables longer into the fall, there are more hardy seedlings such as broccoli, cabbage, and cauliflower available at local nurseries and by mail. Since they take longer to produce than greens or root vegetables, set them out as seedlings. This way you should be able to harvest the cabbage and cauliflower up to the extreme cold and continue cutting broccoli until it tastes bitter.

Another important consideration for fall and winter gardening is optimizing the available light. It’s a balance to be able to protect the plants from severe cold while allowing as much light as possible to reach them and encourage growth. Even if the temperature is well below freezing, Wentworth says they’ll pull off the row covers during the day so the plants can soak up the sunshine.

Watering during the cooler months can be a challenge in below freezing temperatures, but depending on your location, you’ll need to do it on a regular basis. You’ll have to water more frequently in drier parts of the country that receive more sunshine, and possibly less in regions where cloud cover keeps the moisture from evaporating as much.

With a little planning and a few relatively inexpensive season-extending techniques, we’re no longer tied down to just two seasons. So make your plans for a late season garden, and feel good about adding fresh spinach to the menu in mid-January.

While you’re not bringing in ripe tomatoes, there are plenty of delicious options for a late season garden. Give these a try to liven up your late fall and wintertime produce list.

Spinach – You can plant spinach 6 to 10 weeks before the freeze. It’ll continue growing during the winter, and you’ll be surprised at the resurgence in the spring.

Kale – With a little protection, you can harvest kale throughout the winter. Start by seed 10 to 12 weeks before your typical first frost date, or set out plants a month prior. You want decent sized plants going into the winter.

Chard – Chard is a good replacement when you pull out the spring crops by mid-summer. Seed it then, and continue harvesting throughout the winter.

Beets – Beets germinate fairly quickly, but you want to give them plenty of time to mature before the cold weather sets in for good. Seed at least 7 to 8 weeks prior to your first frost.

Turnip – To enjoy an autumn harvest (in time for Thanksgiving), sow turnips in late summer. You can also sow seeds in early autumn for a late autumn harvest.

Carrots – Carrots take longer than you might think. Seed them 12 weeks prior to a frost. When wintering over, cut off the green tops and insulate them to keep them sweet and crisp.

Cabbage – Seed cabbage at least 12 weeks prior to the cold weather, and plant transplants 6 weeks before.

When planting by seeds, is it best to buy new seeds every year or if I have seeds from last seson could I plant them?

Hi David Kopczynski, yes, if you have probably saved your seeds and have stored them properly, in dry and cool storage, you can expect to get another season out beans, peas and corn. Flower seeds – annuals are generally good for 1-3 years; perennials for 2-4 years.

Well I have never planted a Fall Garden. So today I planted 50 garlic cloves. Tomorrow I will plant some lettuce, broccoli, carrots, spinach, and radishes. will let you know how everything turns out. I live near Wilmington Delaware.

I started planting garlic in the fall last year and they turned out beautifully. I’m in Alberta, Canada. When is the best time to plant the garlic in our short summer season?

I live in British Columbia and always plant my garlic in late September early October,depending on the weather. If planted too early it will sprout and you risk frost damage later on in the winter. Once planted I just leave it alone (except for weeding and a little water) until it’s ready for harvest in late July.
I’ve always had excellent results.

Wentworth is wrong about ‘pest pressure’ in fall gardens in the upper South. (I am in zone 8.) Pests peak in late summer here, and fall gardens are chancy. About one year in five I have a good fall garden. Nevertheless, nothing ventured, nothing gained, and gardening keeps down the weeds. Fall beans and onions are up now. I am about ready to plant fall mustard and turnips, and — in few weeks — radish.

We plant our garlic in the middle of October. We can put the root veg. in also we did not know that till we read your site The price of every thing in stores today we started planting our own veg Thank you

how do I plant carrots to winter over for spring consumption– I live in north eastern New Hampshire and we have already had our first light frost.

I live in north eastern New Hampshire and want to plant carrots to winter over until the spring… we have already had one light frost.. the weather forecast for the next week is to bounce from 70 degree days down 60 degree days; with the nights being in the high 30’s to low 50’s. Should I go ahead plant now–? Also, living where we do we get severe weather in the winter– down into the – 30’s,,, Should I cover the area where my carrots will be growing with anything? Thanks in advance for any one’s tips and advice.

Several years ago I left my carrots in the ground because I didn’t have any place to store them and I didn’t want to can them. Their only protection was their tops and a few weeds or grass. When I pulled some up and cook them, they were THE sweetest carrots going.I’ve eaten some of this years crop and am leaving the others in the ground to get frosted on. I read somewhere to leave parsnips in the ground til they have been frosted on for the same reason…to sweeten them I live in Arkansas.

would like to know what zone this is for…same for the desert?

Hi Karen, Actually, you can make use these practices no matter where you live, it’s all dependent upon when your first frost arrives; we recommend reading the full article in the 2015 edition of the Farmers’ Almanac, which also includes frost dates by region, as a guideline. Good luck!

This is awesome, I am excited to get started!
Thank you so much!
Donna
http://www.alpacasplusofva.org

Last year I planted some carrots (romance) towards the end of summer and just let them grow at their own pace. I didn’t expect too much for I live in zone 7ab and thought the warmer temps might just kill the tender shoots. Boy was I surprised! Right around Thanksgiving I went out to see if any of them were ready and they were chomping at the bit to get out. They were the best carrots I’ve ever tasted…sweetness divine. Needless to say I know what will go in the garden this year along with some of the other goodies you mentioned. Who knew that cold weather gardening could be so easy!

How to Pick Sweet Potatoes