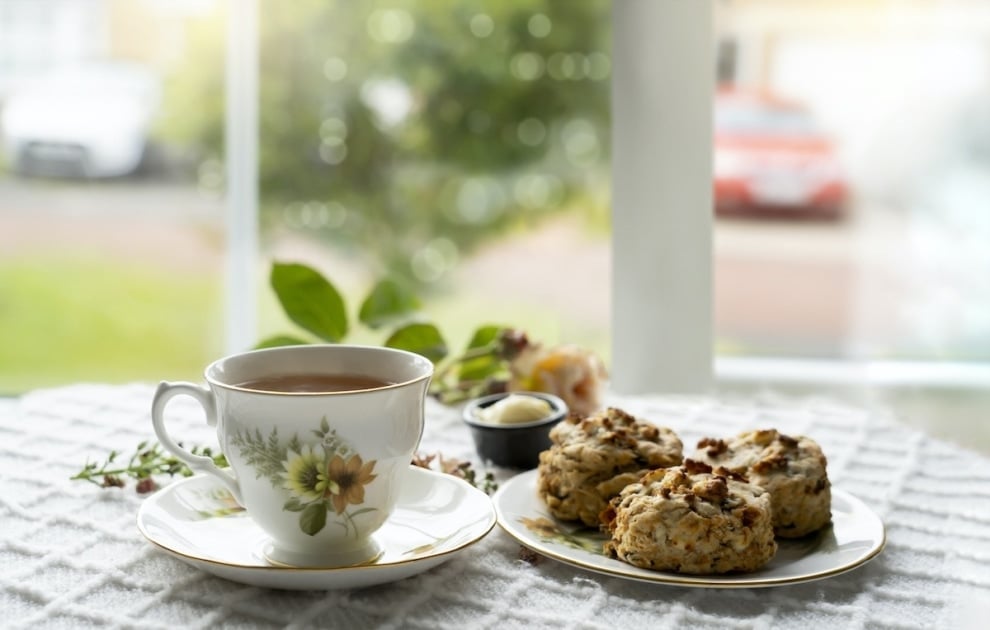 “Taking tea” is an Irish custom and beverage that has been enjoyed for centuries by people of all walks of life. Assam tea, better known in this country as Irish Breakfast Tea, is the hot beverage Irish farmers and fishermen have long depended upon to warm them on a wintry day. From the top of the morning mug to the evening high tea served in fine china, the Irish typically drink four to six cups of tea a day!

Irish breakfast tea is characterized by its robust, malty flavor and reddish color. It is more robust than English breakfast tea, but not as strong as Scottish breakfast tea. Its unique malty flavor is attributed to its Assam content. Assam refers to a unique tropical region in India where this distinctive black tea originates. The Assam valley is nestled in the foothills of the Himalayan Mountains, mostly at or near sea level.

The Assam, India valley is the world’s largest tea-growing region in the world. It produces more commercial tea than any other region aside from southern China (Assam and southern China are the only two regions in the world with indigenous tea plants).

Surprisingly, this hearty black tea was discovered in the 1830s, not by an Irishman, but by the famous Scotsman, Robert Bruce. He is noted to have found this indigenous tea plant (Camellia sinensis assamica) growing wild in the Assam district of India.  The British East India Company subsequently began producing tea in Assam, and exported it to Ireland. It was first introduced to the upper classes around 1835, but by the middle of the 19th century tea became affordable for all to enjoy. Tea gained tremendous popularity, and has retained its status as Ireland’s favorite beverage.

When is Tea Time in Ireland?

The Irish drink a cup of tea in the mornings and anytime during the day. Taking tea is customary in Ireland and is a great way to unwind with family and friends. Traditional teas are taken at 11:00 a.m. and served with scones. Afternoon tea is generally served between the hours of 3 and 5 with a not too sweet cookie, and high tea is typically served at 6:00 p.m. with all the trimmings.

The Irish are noted for drinking their tea strong and with lots of milk. Traditionally milk was poured into tea cups first to prevent the hot tea from cracking fine china cups. What started as a practical method of preserving fragile cups continues to be upheld by tea experts who found that pouring milk into hot tea after it is poured alters the flavor of the tea. Thus, tea aficionados uphold the tradition of pouring milk into the cup first for quality of taste. In Gaelic, the traditional language of Ireland, a cup of tea is called “cupan tae” or “cuppa tay.”

Irish breakfast tea is readily available in retail markets and online, but note that tea blends vary by company as there is no standard formula. In addition to the traditional Indian Assam Tea, Irish breakfast teas sold today in this country may also contain Ceylon tea or teas from Kenya or Sri Lanka. You may want to try several Irish tea blends to find your favorite.

How To Make A Traditional Cup of Irish Tea

The Irish value hospitality, local food and serving plenty of it. A traditional tea may include tiny sandwiches, scones with jam, cakes and other baked goods and plenty of Irish tea. We’ve prepared a sample menu to assist you in planning your own Irish tea.

Irish Soda Bread is made with buttermilk. It is cut into wedges and served with sweet butter.

Irish Shortbread is what Americans consider a cookie and is made with basic ingredients: butter, sugar, flour and cornstarch.

Oatcakes are an Irish staple. Although the dough is cut into triangles and baked, in previous generations, they were cooked in the home on a griddle over a fire on the hearth.

Scones are a popular pastry that is cut into circles, baked, sliced in half and served with berry jam.

Apple Cake is filled with fresh apples, cinnamon, butter, raisins and hazelnuts. Apples have been grown in Ireland for more than 1,000 years.

Hot Irish Tea brings the high tea together in a festive, yet relaxed fashion. Look for blends primarily containing Assam tea to wash down all the tasty treats in traditional Irish fare.

What’s your tea of choice and how do you take your tea?

Even though I do not have Irish in my blood I have always had an affinity for the country and people. Learning how to take my tea properly is wonderful and I will now add my milk fist instead. Also, since we never liked raisins in our soda bread I have always left it out. Glad to hear it is the Irish way. Now to go enjoy my first cuppa of the day. Thank you so much!

I have recently discovered Irish breakfast tea. I love mine with lots of lactose-free milk and honey. Thank you for the tips on how to make the perfect cuppa.

Hi, my name is mary and I am of Irish desent. I love my tea,it brings back memories from childhood; after supper mom would make a pot of tea and we would all sit around the table and drink tea,talk,watch star trek. Friends would stop by for a cuppa. Loved those days and the people I shared it with. I take my cuppa with milk and sugar.

I drink about 8 to 12 cups of tea a day. I learned to love tea from my Grandmother when I use to stay with her. She always drank tea with sugar and lemon and gave me the same. When I wasn’t up to par, she would replace the sugar with honey. I drink coffee on occasion, but tea is my choice. Due to my love of tea, I have collected teapots, tea cups, small tea spoons and a selection of tea balls and lemon servers that squeeze the juice right into your tea. If I live to be 94 as my Mom and Grand mom did, it will be because of my love for tea like they had as well! I am neither English, Irish or Scottish, but love tea anyway.

Enjoyed the article but beg to differ about the soda bread. A true Irishman would never put raisins or caraway seeds in his soda bread. 🙂

Bob Raymond: Good point! Our recipe does contain both; but you are correct that traditionally, the bread was very much a peasant bread, and didn’t contain those ingredients. They’ve been added as the recipe has been Americanized. You can omit them when baking.

Aw sure look it Bob, any respectable Irish person knows that. We don’t even have raisins or caraway seeds in our presses, hah. One must be careful of these American websites with “Irish” recipes.

Thank you for helping me find the correction, milk before tea, to my misunderstanding the secret my great grand father introduced me to as a child. After years of coffee I’ve returned to tea, yet never managed to get my milk and honey to taste what my taste buds desired. Looking forward to even greater tea times!!!

was able to visit Ireland and thus embarked upon the Breakfast Tea. Just about the only tea I drink now!

I did not know that the Irish were so fond of milk in their tea…today is a good day to try this out..I usually just use a little honey…Great grandparents: Patrick Cullen” hailed from the homeland…..Thank you for sharing….