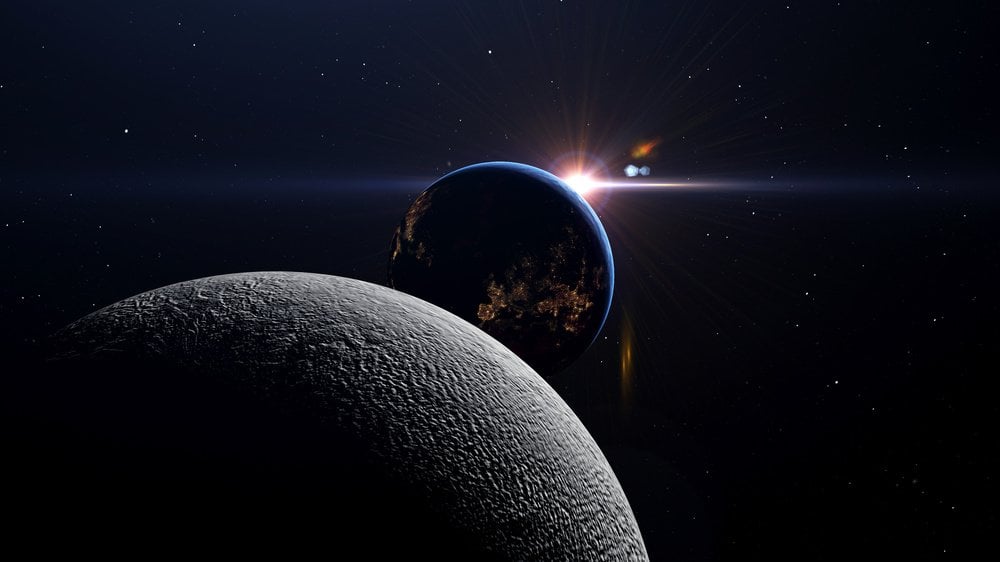 There will be four eclipses in 2022: Two of the Sun and two of the Moon.

1) April 30—Partial Eclipse of the Sun

The dark shadow cone of the Moon will completely miss the Earth, passing approximately 750 miles (1,200 km) below the South Pole. But the Moon’s outer shadow—its penumbra—does scrape a part of the Southern Hemisphere. This causes a partial solar eclipse, visible to a varying extent around sunset across a swath of the South Pacific Ocean and South America’s southern and western portions: Chile, Argentina, Uruguay, southern Peru, southern Bolivia, western Paraguay, and a tiny slice of Brazil.

The greatest eclipse will take place over the South Pacific Ocean, 300 miles to the northwest of Yelcho, a Chilean Antarctic research base in South Bay, Doumer Island. The normally thick horizon haze may redden the Sun’s light, giving it the appearance of a slice of cantaloupe melon.

This event is almost perfectly timed for most of the Americas. The Moon will become totally eclipsed near or just after moonrise along the Pacific Coast of Oregon and Washington state, and across much of western and north-central Canada. The Moon will appears as a ruddy, ghostly orb, “magnified” as it rises above the east-southeast horizon by the well-known “Moon illusion.” From Hawaii, moonrise coincides with the end of totality; unfortunately for much of Alaska, the eclipse ends before moonrise. Across the Atlantic Ocean, moonset will intervene across much of Africa and Europe; much of central Europe will experience the drama of totality as the Moon sets.

Totality will last quite a bit longer than average: 1 hour and 24 minutes. The Moon will pass south of the center of the Earth’s shadow, so during the total phase, the lower part of the Moon will appear brightest, while its upper portion should appear noticeably darker and more subdued. However, the brightness and colors that appear on the Moon will solely depend on the state of our atmosphere: a chaotic brew of clouds, volcanic dust, and other contaminants. So it’s hard to say in advance exactly how the totally eclipsed Moon might look.

3) October 25–Partial Eclipse of the Sun

To produce this eclipse, the Moon’s shadow falls chiefly on the north polar regions of Earth. It will be visible from an eastern slice of Greenland and all of Iceland, as well as most of Europe (except Portugal and the western and southern portions of Spain), northeast Africa, and in varying extent over much of western and central Asia. Greatest eclipse–with nearly 7/8 of the Sun’s diameter hidden–occurs at local sunset over the West Siberian Plain, near the city of Nizhnevertovsk (pop. 260,000).

4) November 8–Total Eclipse of the Moon

This eclipse favors the western half of North America, the Hawaiian Islands, eastern Asia, Indonesia, New Zealand, and the eastern half of Australia. Along the Atlantic Seaboard, the Moon will set while it begins to emerge from total eclipse. The Moon will pass to the north of the center of the shadow, and, as was the case in May, totality will be unusually long, lasting 1 hour 25 minutes. We might expect a moderately dark eclipse, possibly featuring a brownish hue across the lower part of the Moon, contrasted by a brighter coppery red upper rim.

What Is A Solar Eclipse?

A lunar eclipse, or an “eclipse of the Moon,” happens when Earth is directly between the Sun and Moon, blocking the Sun’s light from reaching the Moon. In a total lunar eclipse, the Earth’s shadow completely covers the Moon, turning it a coppery shade of red, sometimes known as a “Blood Moon.”

A lunar eclipse can only take place when the Moon is in the full phase.

What’s more, you’ll be able to watch any lunar eclipse with the naked eye—no special glasses or filters are needed!

Why Aren’t There Eclipses Every Month?

If solar and lunar eclipses occur when the Sun, Moon, and Earth form a straight line, why don’t we have solar or lunar eclipses every month? After all, they line up every time we have a full Moon a new Moon phase.

It’s All About the Angle of the Orbit

It turns out that the answer to both of those questions, above, is connected to the angle of the Moon’s orbit, which is inclined about 5° from the ecliptic, another name for the Earth’s orbit around the Sun. For eclipses to happen with every full or new Moon, the Moon and Earth would have to orbit at the exact same angle (astronomers know when such events are going to happen, which is why you get alerted ahead of time to watch).

It takes the Moon a little less than a month (29.53 days) to orbit the Earth. In that time, it crosses the ecliptic plane twice. Each of these crossings is called a node. If the Moon is new or full at the time it crosses, a perfect alignment of Sun, Moon, and Earth, called a syzygy (from the Greek word for “bound together”), occurs, resulting in an eclipse.

The times when the Sun appears, from the Earth, to be close enough to the Moon to allow for an eclipse to occur, is called an eclipse season. There are two roughly 34-day-long eclipse seasons each year, falling about 25 weeks apart.

At least two, and sometimes three, eclipses occur every eclipse season. If the first eclipse in the season falls at the very beginning of that season, there will be enough time for two more eclipses.

Can You Have 3 Eclipses In One Month?

It’s possible, though very rare, to have 3 eclipses in one calendar month. The last time that happened was in 2000, but it won’t happen again until 2206!

How Many Eclipses Do We Have Each Year?

Most years have four or five eclipses, but it’s possible to have a year with six, or even seven. For seven eclipses to be possible, a single eclipse season must fall during December and carry over into the new calendar year. The last time we saw a year with seven eclipses was 1982. If you don’t remember that, you may still be around to see the next one in 2038.

When Will We See The Next Total Solar Eclipse In North America?

If you were lucky enough to see and experience The Great American Solar Eclipse on August 21, 2017 (which was a total eclipse of the Sun), most likely the very first words out of your mouth were, “when can I see another one?” Or if you missed it, you only have to wait another 8 years.

In our technological age, relatively rare occurrences like total solar eclipses are well understood by scientists, and thanks to the news and internet, we know eclipses are coming well in advance; information about what they are and what to expect are readily available, and so we look forward to them. But in the days when life was harder and accurate information scarcer, eclipses were often seen as a mysterious and unwelcome disruption of the natural order.

Counting on the Sun and Moon

Man has always looked to the heavens, particularly to the Sun and Moon, to mark the passage of time, and provide social stability; daily and seasonal cycles have always been very important to agriculture-based societies. So what happens when the regular, predictable pattern of day and night, and light and dark that we all depend on, is unexpectedly disrupted?

Imagine yourself as a simple farmer in ancient times, out working in the fields, and suddenly, without warning, it begins to grow eerily dark, with the Sun still high in the sky. You glance upward to see what looks like a “bite” being taken out of the Sun. Sometimes the “bite” becomes larger and larger until the Sun seems to disappear altogether, leaving only a ghostly halo. It grows so dark that you begin to see the stars twinkling in the sky as if it were night. Pretty frightening, right?

It’s understandable, then, that solar eclipses were met with anxiety and dread. And it’s no surprise that folklore, myths, and legends about our most prominent celestial neighbors abound in many cultures around the globe.

Taking A Bite Out Of The Sun?

Most cultures viewed a solar eclipse as some mythic creature devouring the daytime Sun. In ancient China, it was a celestial dragon, and in southeast Asia, they imagined it to be a giant turtle, frog, or toad.

In Korea, it was thought that fire dogs were trying to steal the Sun or Moon, and when they bit it, an eclipse resulted. For the Vikings it was a hungry wolf named Sköll (whose name means “Treachery”) that raced across the sky, hunting down and eating the Sun. Even to cultures like Greece and Rome, which had enough mathematical and observational knowledge to be able to predict eclipses, they were often viewed as bad omens, portents of evil, and astrological events to be feared.

In Hindu mythology, it was believed that the demon Rahu stole an elixir of immortality, called amrita, but was beheaded by the god Vishnu before he could fully swallow it. Consequently, the demon’s severed head, forever alive, floats around and occasionally devours the Sun. To this day, in India, people make noise by banging pots and pans and setting off fireworks during a solar eclipse to scare Rahu away and make him cough up the Sun.

A northwestern Native American tribe has a legend that a solar eclipse is the result of a quarrel between a great bear and the Sun, ending with the bear taking a huge bite out of it. In fact, the tribe’s name for a solar eclipse translates to Sun got bit by a bear.

Emperors, Kings, and rulers throughout history have been particularly nervous about eclipses. Their court astrologers interpreted them as bad omens that the monarch’s power was in danger. In ancient Babylon, there was the practice of hiring “stand-in” kings to sit on the throne during an eclipse, so any harm would come to them rather than the real king.

In 1133 King Henry I died shortly after a solar eclipse, and some in his court had, in fact, assumed that it was tied to the astronomical event.

Here’s a look at some of the stories, beliefs, myths, and superstitions about lunar eclipses from around the world:

So whether you believe lunar eclipses are spooky or spectacular, you can’t deny they’re a fascinating sight to see.

Eclipses Are Good Omens In Folklore

Not all of the tales associated with eclipses are negative!

To this day, superstitions persist about eclipses. Many cultures still believe that eclipses are evil omens that bring death and destruction. One of the most pervasive is that eclipses are dangerous to young children and pregnant women. Many people, even in our modern times, won’t venture outside during a solar eclipse because of the belief that they will be harmed (be sure to wear protective eclipse viewing eyewear)!

Fortunately, most of us know that solar eclipses are nothing to fear, and we will enjoy them for what they are—a rare and beautiful celestial event!

Plant dill near tomato plants to prevent tomato hornworms. The dill is considered a "trap crop" as the hornworms will go for the dill over the tomato plants.
More hints & tips 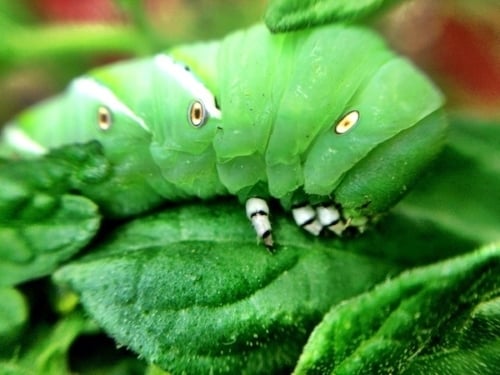