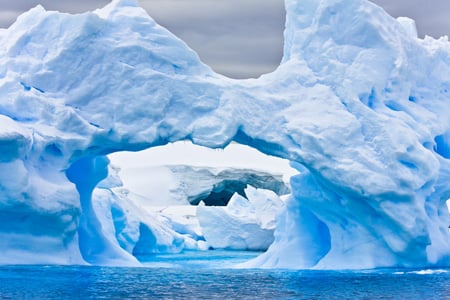 After a mild season last year, Old Man Winter is back with a vengeance! Last week brought punishingly cold temperatures to much of the U.S. and Canada, with actual temperatures dipping below 0° F in many regions, and wind chills much colder than that.

As cold as some of last week’s temperatures were, though, they’ve got nothing on the coldest temperature ever recorded on Earth, âˆ’128.6 °F, recorded at the Soviet Vostok Station in Antarctica, on July 21, 1983.

No other continent has seen a temperature even close to this record. The closest, at âˆ’90 °F, recorded in Russia’s Sakha Republic on two separate occasions, was nearly 40 degrees warmer.

The coldest temperature in both North America and Canada was âˆ’81.4 °F (âˆ’63 °C), recorded in Snag, Yukon on February 3, 1947. At just over a degree and a half warmer, the United States record occurred in Alaska, where a temperature of -79.8° F was recorded at Prospect Creek Camp in the Endicott Mountains of northern Alaska on January 23, 1971.

In the lower 48 States, the coldest temperature was ten degrees warmer than the nationwide record at -69.7° F, recorded at Rogers Pass, in Lewis and Clark County, Montana, on January 20, 1954.

Want to know what the record low temperature is for your state? Find out below!

I think that earlier this year there was a new record set in Anarctica, around -134 or -135.

Con-trails on the west coast have joined in with the jet stream from the South of Texas from the Gulf ! It had been predicted at the beginning of the week, maybe sooner. The phenomena is being labeled a conspiracy theory, but the U S government funds it apparently to cool the planet if global warming is on-going..

Thank you God for All. Do Unto Others as you would have them do unto You…
Yes, we are having a global warming, I believe it is as someone above mentioned called “a cycle”. The scientists were speaking about this cycle before it started. Said we were in for a cycle of EXTREME temps for aproximately 75 years. Anyone listening to the news, 15, 20 years ago knows. Scientists were pretty much in agreement about the cycle we were about to live in.

You really are simple folks as in simpleminded aren’t you? tell hte sun cycle story to the polar bears I give up trying to be logical, yeah ok you are right its the sun cycles, or maybe its a liberal.socialist plot according to Glen.

People forget that our world and the sun are part of mother nature which will always be going through changes.

It takes about 30 years for the weather to go from one extreme to the other and back. That’s why the coldest temps were 30ish years ago. This is due to the ocean current that travels up and down the Atlantic coast. I learned this in my oceanography class many moons ago. The weather will seem nicer in a few years.

Glen I suggest you get over your Al Gore issues and read some real science.
As for Al Gore, george Bush and all the rest of them ……..they are not scientists but politicians. Don’t you get it ? The sun cycles? you are kidding me right?

Some have suggested that throughout winter at least, Canadians are God’s frozen people.
Others deny this, saying many are cols but few are frozen.

Mary, your right, global warming IS a real issue, it’s called the Sun and it’s cycles. But Al Gore will say otherwise to push a global carbon tax on us. Al Gore and his ilk will make HUGE profits on this sham.
http://answers.yahoo.com/question/index?qid=20080407190706AApDFHW

I would like to know where to find the article referred to regarding:
” infomation on weed killing,planting, pruning times”
Please respond

Yes, the Yukon is part of Canada.

global warming is a very real event, and having colder then usual winters does not negate the effects of global warming consider the following:
Which region on the planet has had the greatest increase in temperature over the past couple of decades?
Answer – the Arctic, when the earth’s overall temperature rises, the Arctic’s rises significantly more.
#2 – So what happens when the Arctic temperature rises so much more than the temperature on most of the rest of the planet?
Answer – Easy. Ask yourself what happens when any gaseous substance is heated. Its local pressure increases and as a result the gaseous substance EXPANDS. In the case of the Arctic, we’ve got several million cubic miles where the temperature has risen significantly more than it has in the sub-arctic areas…and as a result, the warmer Arctic (which is STILL very cold to us, mind you) is expanding, pushing colder sub-Arctic and even Arctic air down to lower latitudes. That’s why, people, that we’re getting historically-bad winter weather not only here in America but also in the rest of the world that shares our general latitude, i.e. Europe and Russia.

I realy like the inromation on weed killing,planting, pruning times

I agree with Linda. My immediate thoughts on this article was that the coldest temperature ever was recorded only thirty years ago. Of course we are only talking recorded temperatures.

Hello Tina, how are you? This is most likley from the U.S. letter. However there is a Canadian version, and a recipe’ letter you can sign up for as well. Hope this was helpful.

Is the Yukon not part of Canada?

What about Canada temperatures?