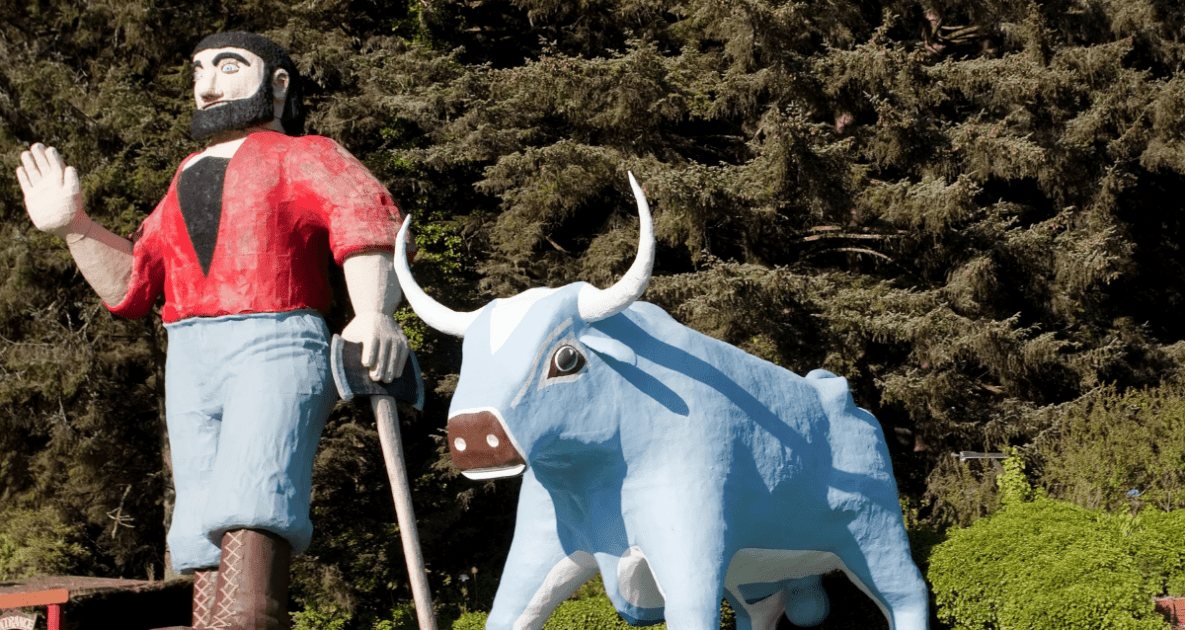 Myth-sized man or man-sized myth, Paul Bunyan and his fabled companion, Babe the Blue Ox, have achieved life incarnate in the constant retelling of stories, theater productions, anecdotes, animation, festivals, songs, and literature. The larger-than-life legendary lumberjack has been a folk hero for generations.

Was Paul Bunyan A Real Person?

It seems that many U.S. States lay claim to being the birthplace of Paul Bunyan, from Maine to Minnesota, with stories abound about his logging exploits. Even Canada has been known to mark the fabled phenomenon as its own, with the arrow pointing to the nation’s 1837 Papineau Rebellion, where loggers armed with “axes, mattocks and large wooden forks,” according to one account, joined in the opposition to English rule.

Residents of Bangor, Maine, claim the city as not only the birthplace of the lumber industry, but the birthplace of Paul Bunyan, as well. There, Paul Bunyan Day is celebrated on February 12th, the supposed date of his birth. The statue of his likeness that stands in front of the Bangor Civic Center in Bass Park is “reputed to be the largest statue of Paul Bunyan in the world,” at 37 feet high, 3,700 pounds, and designed to withstand 110 mph winds. A time capsule is entombed in the statue’s pedestal, slated to be opened on February 12, 2084.

The legendary lumberjack is also celebrated in North Dakota, where Paul Bunyan Day is on June 28th each year. According to the stories, Bunyan was a giant man with incredible physical strength who single-handedly established the logging industry, cleared North Dakota of its forests, dug out Lake Superior, and even trained carpenter ants to help his fellow loggers. It is believed a young woman named K. Bernice Stewart was the first person to write down the original Bunyan tales. Stewart collected the stories from local loggers while studying at the University of Wisconsin in 1914.

Some historians connect Bunyan’s name with the Quebecois term bon yenne, meaning to express surprise or astonishment. The English surname Bunyan, however, comes from the old French bugne, meaning large lump or swelling. Nineteenth century woodsmen are said to have promulgated the Paul Bunyan myth, regaling one another with tales of his size, strength, proportion, and valor around flickering camp stoves on coal-black nights.

Though the genesis of this favorite folkloric figure many never be known, Paul Bunyan is said to have first been popularized in print, in James McGillivray’s 1910 Detroit News-Tribune feature, Logging Tall Tales. In 1916, a promotional Red River Lumber Company pamphlet by writer William B. Laughead, who is credited with naming the blue ox, Babe, perpetuated the myth.

With his popularity and mass market appeal the subject of discourse among historians, academics, popular culture pundits, and others, the character of Paul Bunyan’s may simply be an aggregate of loggers and logging stories. His name and image continue to sell food products, sports items, clothing, and toys, and promote media, local businesses, and tourism. So much for a man that may never have existed!

And About Babe the Blue Ox:

In Old Forge NY there is a large Paul Bunyan. In the water park Enchanted Forest… visit this awsome place