Bacon has been around for hundreds of years, but it only recently has achieved superstar status in the food world. Why is everyone in love with it? Since the first Europeans set foot in North America, bacon has been humble breakfast fare. For generations, it loyally served as a morning protein source relegated to a place on the plate between the eggs and toast or cozied up next to pancakes.

Bacon’s Fall And Rise Back To The Top

After years of dutifully playing this supporting role at breakfast, it struggled during the 1980s and 1990s as “fat-free” became the diner’s mantra. The Atkins diet and some other low-carb eating regimens came to the rescue, however, and consumers once again started “bringing home the bacon,” even during the recession of the early 2000s. And in the past decade, it has shot to fame. It’s as if a lightbulb went off over consumers’ heads and they collectively said, “If this is good for breakfast, wouldn’t it be great for lunch and dinner, and for a mid-morning snack and a midnight snack and in lip balm?”

More than the “B” in BLT

At one time, sales went up only when tomatoes were in season and people were making BLTs to utilize their garden bounty. Then sales would taper off again as the tomato vines withered. But in recent years, sales have soared independent of tomato harvests. While still the “B” in BLT and a breakfast staple, bacon has also found its way onto other sections of the menu, from appetizers, soups, and salads to sandwiches, entrees, and desserts.

The trend has also gone beyond the kitchen as fans proclaim their love of all things bacon on quirky throw pillows, baseball caps, tee shirts, and neckties. People who can’t get enough to eat can use bacon-flavored toothpaste. Those who just love the smell of it can light a bacon-scented candle or use bacon-scented shampoo, cologne, and massage oil. For those who want to drink in their love can pick from bacon-flavored soda, beer, and even vodka.

The love of bacon has also been combined with the love of sugar through brittle, chocolate-covered, ice cream, and candy canes. A bacon-flavored latte can be whipped up by adding bacon-flavored syrup to your coffee drink.

Will the madness ever cease? Chicago-based chef, food blogger, and recipe developer, Billy Parisi doesn’t think so. “It’s been a huge culinary trend in the last five years,” he says. “But I remember thinking when I was 13 or 14 that if I had to choose one thing to eat for the rest of my life, it would be bacon.”

Bacon From Many Sources

While it can be made from soy, turkey, beef, or even duck, when most people think of bacon they think of pork; meat from a hog’s belly that’s been cured, smoked, and sliced. The type of wood used for smoking it can subtly change the flavor. Common smoke flavors come from apple, hickory, and maple.

“You can get expensive, perfectly cured, thick-cut slices that cook up tender and crisp at the same time,” Parisi says. “But you can also get it on sale for less than $3.99 a pound, and while it may be fatty and thin, it’s still bacon. That’s what’s great about bacon … even when it’s bad, it’s good.”

Have a great recipe idea for bacon? Share yours with us here!

Bacon is good but I don’t understand why people say it’s THAT good? It’s just bacon, for crying out loud.

My favorite sandwich is. Marble bread or rye with seeds with swiss cheese, cooked bacon and grilled. To add extra yummy, slices of fresh garden tomato .. So very good. late breakfast/brunch or for dinner with a wedge of romaine,tomato, bleu cheese and finish off with a small dish of fresh fruit or Waldorf salad. How fast and yummy is that for a fast dinner?.

Aluminum foil and plastic wrap dispensers have built-in tabs on each end to hold the roll in place. Just press in the tabs.
More hints & tips 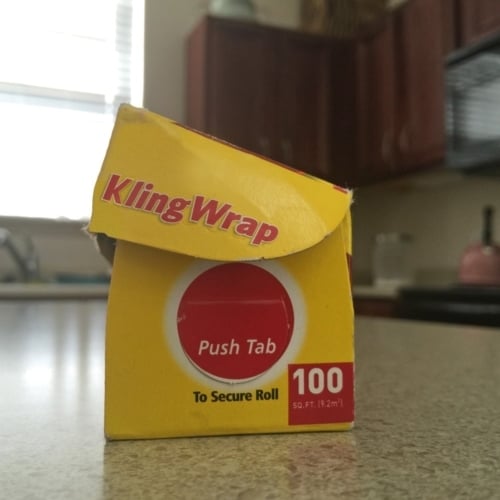