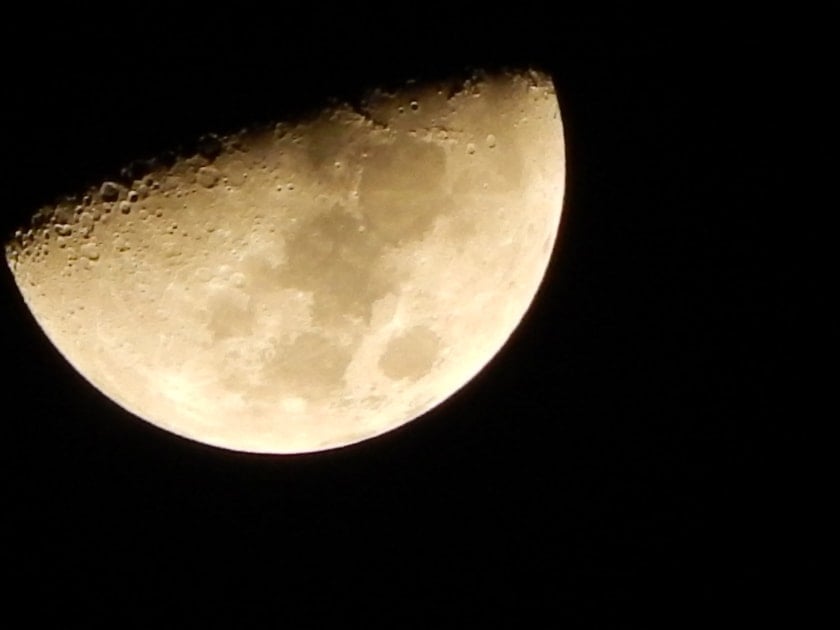 There are many misunderstandings about astronomy, and the misconceptions and myths surrounding the Moon are among the most common.

It is certainly logical to expect that when the Moon is 50 percent illuminated (at First or Last Quarter phase; also sometimes called the “half-moon”), that it would be shining only half as bright as a full Moon.

If the Moon’s disk was flat like a white piece of paper or a projection screen, then its surface brightness would be the same all over and this would be true. But this is not the case. The Moon is a sphere and as such the amount of reflected light from the Sun per unit area decreases toward the terminator (the dividing line between the bright and shaded regions).

Near, and especially along the terminator, mountains and boulders strewn across the lunar landscape cast innumerable shadows. This gives the effect of the Moon appearing brightest near and along its edge, but grayer toward the terminator.

In contrast, at full Moon, the Sun is shining straight down virtually everywhere on the lunar surface so there are no shadows at all. Believe it or not, only about 2.4 days from full Moon does the Moon shine half as bright as full. And when the Moon is at the First Quarter phase, it is actually only 1/11 as bright as full. At Last Quarter it’s even dimmer—1/12—because of the greater visible area of the dark maria (or lunar “seas”) on its illuminated portion.

Is there a question about the Moon you’ve always wanted to know but were afraid to ask? Ask it here in the comments below and we’ll provide the answer!

The moon is the same size when “full” as it is when only a half moon, quarter moon, or sliver, so why does a full moon create weird phenomenons on earth, like stronger or higher tides, and “loonie” behaviors in people in hospitals, nursing homes, etc.?