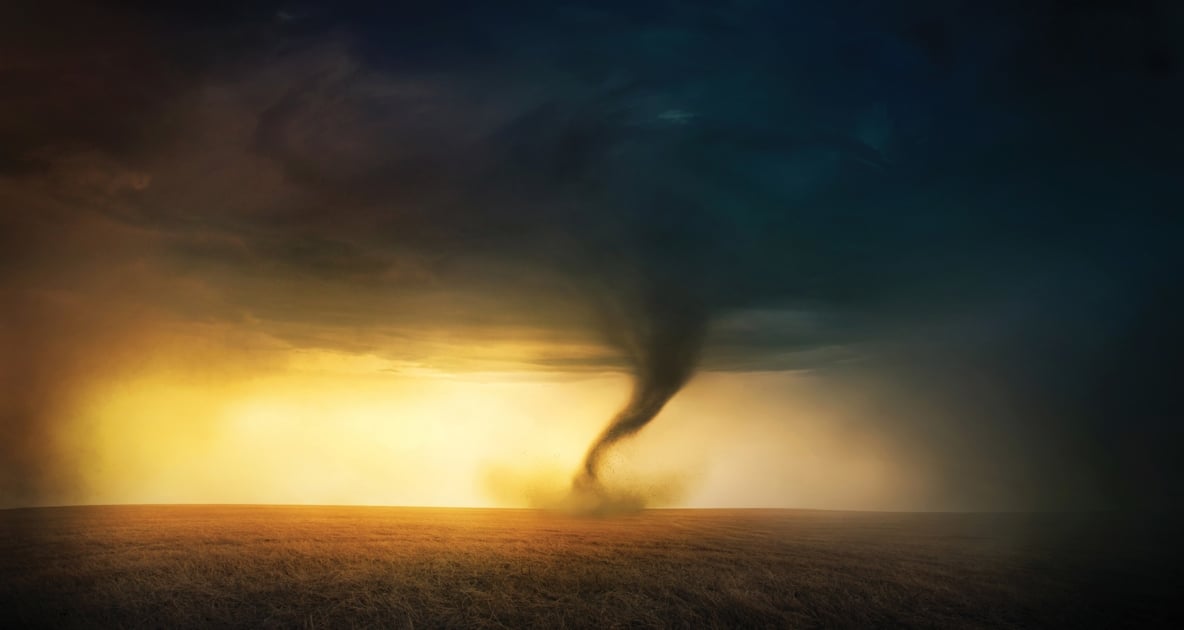 Tornadoes are a frightening and deadly force of nature, so it’s not surprising that the people who made up the five nations of the Iroquois League once viewed them as a cruel and powerful spirit.

According to Iroquois mythology, tornadoes were actually Dagwanoenyent, the daughter of the wind spirit. She was said to take the form of a whirlwind. The Seneca Tribe considered her to be a dangerous witch, and believed she could not be killed. Anyone who angered her would be picked up and thrown many miles away.

In other legends, she was still seen as fearsome, but could be called upon for aid in battle by anyone who knew the right song to sing to her. She was even rumored to have given a pair of brothers three hairs from her head, which allowed them to draw rain from the sky whenever they needed it.

Another popular tale concerns her destruction at the hands of a man who was once her lover. After Dagwanoenyent attacked the man and his nephew several times, they burned her with fire and ground her bones to a fine powder. To prevent her from returning to life, they separated the powder into three bags and vowed to always keep them separate.

Dagwanoenyent must have outsmarted them, though, because she still visits us today. Each year, an average of 800 tornadoes sweep across the United States, killing dozens of people, and injuring thousands.

Legend Aside, What Really Causes Tornadoes…

Today, of course, we know that tornadoes are caused by giant thunderstorms known as “supercells.” They form when warm, moist air rises from the ground and collides with cooler, drier air above it. The rising warm air cools, causing the moisture it carries to condense and form a massive thundercloud. These supercell clouds can reach heights of up to 70,000 feet!

At the same time the cloud is forming, the cooler air begins to sink, sending the warmer air spinning upward. This is what creates a tornado’s characteristic funnel shape. This spinning column of air picks up momentum as it goes, reaching speeds of up to 100 miles per hour. Once it gets going, a tornado can smash buildings into splinters, pick up automobiles, strip the bark from trees, and worse.

It’s hard to believe air alone could be so destructive, so it’s not a far leap to imagine such a deadly weather phenomenon to be the evil spirit of Dagwanoenyent, daughter of the wind.

“Super Cells”! Everyone knows tornadoes are actually demons in the form of destructive wind currents.

Jamie,
Thanks for this fantastic article. I love Native American thought. I’m also into organic wellness. Have you used the Bach FLower remedies and the Young Living Oils? I have just used Frankincesne & Lavender to heal a badly strained knee. Big relief of strained muscle and after surgery pain & swelling. Regards,Dee in New Jersey

Thanks for the interesting reading. Even at my age, you constantly teach me something and keep me interested without any gimmicks just interesting reading and learning. Your website asks if I still want to keep getting this almanac info and I would never consider declining. thanks again

Thank you for this interesting article. I always ask my children to read them because I think they are so informative and they have learned some interesting facts from you.

Farmers Almanac
Thank you very much for all the very informative information that I have received over the years! I have been with you-all for years starting with the yearly almanac that I purchase yearly.thanks again!!!

Thank You I enjoyed the article where I live in so. ca we don’t get many so thank you it is always nice to know how they form

I appreciate the interesting & insightful lore and always learn something from your articles.