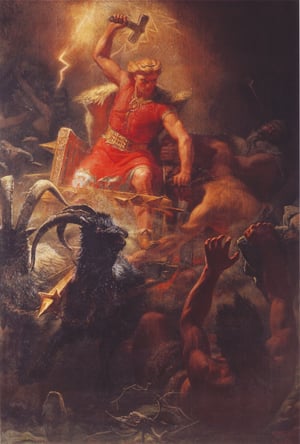 Thunderstorms are one of the most dramatic natural occurrences most of us see on a routine basis. While an average thundershower may not be as devastating as a hurricane or tornado, what it lacks in destructive force, it makes up for in drama. A flash of lightning, coupled with a clap of thunder, can be nothing short of awe-inspiring.

It’s no wonder, then, that nearly every culture has personified these forces as a deity. One of the most beloved and well known of these is Thor, the Norse god of thunder. Featured in epic poetry, operas, films, and comic books, Thor is so popular that he even gave his name to a day of the week: Thursday.

Son of Odin, the “all-father,” Thor was a muscle-bound hunk who wielded a magical hammer, Mjölnir, that returned to his hand whenever it was thrown. Thor spent his days defending Asgard — the home of the Norse gods — from serpents and frost giants and the like.

As fun as it may be to imagine Thor rumbling through the heavens slaying evil monsters, today we know that thunderstorms, like everything else in nature, have a scientific explanation. But what causes them?

Lightning occurs when liquid and ice particles in the clouds collide with one another and rub together, creating a static electrical charge. Some of those particles become positively charged, while others become negatively charged. These electrically charged particles are called ions. Over time, the strength of the charge grows, and these opposite ions become attracted to one another, causing the electrical energy to shoot between them, or between them and the ground, expelling the buildup of energy.

This activity usually takes place 15,000 to 25,000 feet above sea level, and it is hot! The temperature inside a lightning bolt can reach 50,000° F. That’s hotter than the surface of the sun.

Thunder is simply the sound that lightning makes. It is caused by the expansion of rapidly heated air (remember, 50,000° F!). Thunder always accompanies lightning, but may be heard even when the lightning can’t be seen.

Of course, ancient Norsemen didn’t know about ice particles in the clouds, or the attraction of electrically charged ions, so they summoned up a more romantic explanation. To them, each shaft of lightning was another blow against the forces of darkness!

I know how thunderstorms are made but I still like to think it’s Thor coming to Midgard using the Bifrost.

I was always told it was the devil beating his wife.

Thunderstorms =The Gods are bowling…:-).

My mom always told us that God was watering his flowers when it rained and setting off fireworks when there was thunder and lightning. Same story I’ve told my kids, too! 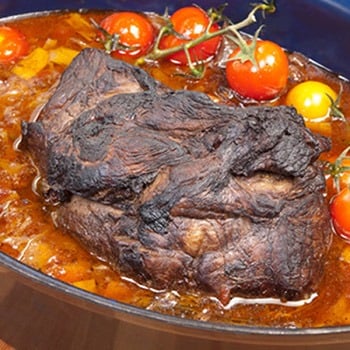