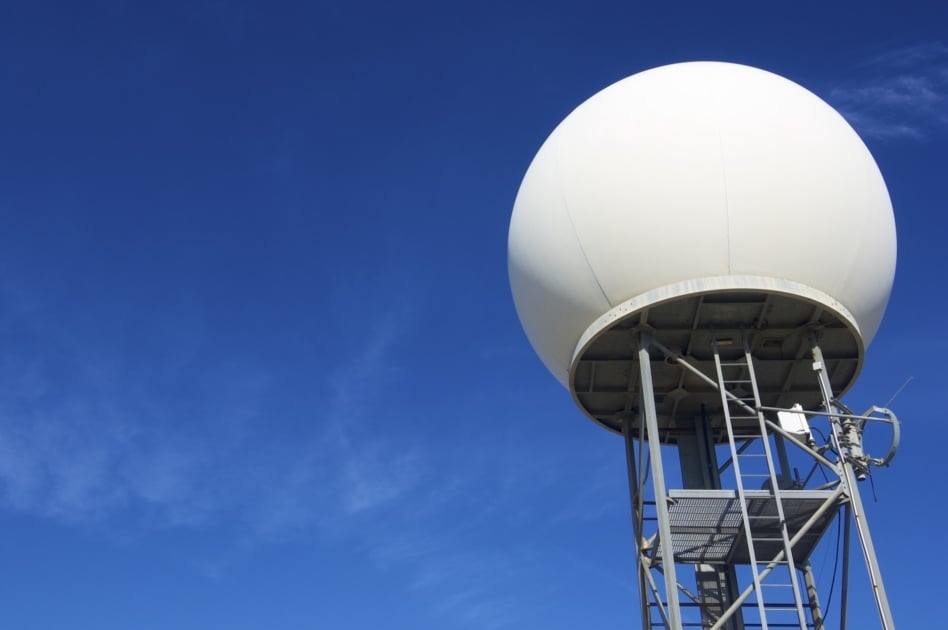 If you watch the nightly news, your meteorologist usually refers to “Doppler radar” or “weather radar” in the local forecast. But what is it, and how does it work?

Radar was first conceived in the late 19th century by German physicist Heinrich Rudolf Hertz who demonstrated that radio waves could be reflected by metallic objects. Another German inventor, physicist, and entrepreneur, Christian Hülsmeyer, developed the first patented device that used radio waves for detecting the presence of distant objects. Hülsmeyer called his invention the Telemobiloscope, a simple detection device intended to help ships avoid collisions in fog. But its main drawback was that it could not directly measure the distance to a target.

Over time, and with refinements, the invention we know today as radar came into being. Radio waves are both reflected and scattered by obstacles in their path. This is the basis for radar – “radio detecting and ranging.”

Here’s how it works: A transmitter emits a narrow beam of short-wavelength energy in short pulses. Between pulses, a receiver listens for any waves that may be reflected or scattered back to the antenna. From the elapsed time between the transmitted pulse and its return, the distance of the “obstacle” can be easily calculated by the direction the antenna is pointed.

Just prior to World War II, during early tests of this highly secret weapon, it became necessary to overcome some very annoying problems. Chief among them was the fact that clouds and rain blocked enemy planes and ships from view. It didn’t take long to realize that in the years to come when the world was no longer at war that the chief use of radar would be to detect the weather. Indeed, radar is used more and more to probe the atmosphere for liquid and solid water particles. The amount of backscatter from these particles depends strongly on their size and the wavelength of the radio waves.

Meteorological radar sees only those clouds that produce precipitation. So it became a useful tool in telling exactly where it is raining or snowing at any given instant in time. It also gives a very good estimate of the intensity of the precipitation because a greater returning signal means the presence of more and larger raindrops and snowflakes. Meteorological radar is designed so it can either sweep in a horizontal circle or up and down. It can have an effective horizontal range up to about 250 miles before the curvature of the Earth hides too much of the lowest regions of the atmosphere, extending from the earth’s surface to a height of about 4 to 6 miles.

The Shape of A Tornado on Radar

In 1949, meteorologist Edward M. Brooks observed that a thunderstorm that produced a tornado had a rather funny shape on the radar screen. It had a hook-like echo extending from the southwest corner of the storm. Brooks dubbed it a “tornado cyclone.” Unfortunately, the significance of this discovery was not appreciated for four years. But by April 1953, meteorologists had realized that hook echoes are characteristic of tornado situations, and often a hook echo will appear as much as half an hour before the tornado strikes Earth!

Disclaimer: Not all tornadic storms display a hook echo and not all hook echoes produce tornadoes! Nevertheless, hook echoes and tornadoes occur together most of the time, and many lives have been saved because these warning signs were revealed by the radarscope.

Thanks to a series of disastrous hurricanes along the U.S. East Coast in 1954 and 1955, Congress was prompted to authorize a national weather radar network.

A Call For A New System

In 1957, the weather surveillance radar network was in business. As many as sixty-six WSR-57s were in use from coast to coast. But by the mid-1980s it was obvious that a new type of radar system was desperately needed. The 57s, as they were affectionately called, was a product of 1950s technology. They used outdated vacuum tubes and replacement parts were becoming increasingly difficult to find. It was time to move on to the more powerful NEXRAD system (Next Generation Radar), officially called the WSR-88D, the “D” standing for Doppler radar.

Doppler radar works on the same principle that you experience every day when a car, truck, or jet aircraft passes by. Think of a police car siren, as an example. As the siren approaches, the sound is always high-pitched. As soon as the car passes, the pitch drops a few notes. The faster it moves, the more the pitch drops. It was J. Christian Doppler, an Austrian physicist, who was the first to explain this principle in 1842. Take a listen below:

When a signal is sent out by the radar, it comes back with a higher pitch if the scattering object is approaching the radar unit. The more rapidly the object approaches, the higher the pitch of the return signal. Therefore, it is actually possible to tell the component of velocity for objects moving toward or away from the radar unit. The objects of importance to meteorologists are raindrops and snowflakes. Since these are carried along by the winds, Doppler radar is actually able to “see” into the clouds and tell the winds within clouds.

Doppler: Radar With A Life-Saving Purpose

The chief purpose of Doppler radar is to improve tornado warnings. The radars are sensitive enough to detect the actual funnel cloud itself; more often than not, NEXRAD is searching for the so-called “mesocyclone” — the intense low-pressure circulation that surrounds the individual tornado hidden within most severe thunderstorms.

It also provided improved resolution and sensitivity and farther-reaching range allowing detection of weather events at much greater distances from the radar site, as well as a feature known as “dual polarization” that allows the radar to distinguish between rain, hail, and snow, something the old WSR-57 radars couldn’t do.

Early trials showed that rain, sleet, snow, hail, birds, and even insects, all have different signatures with dual polarization, which could mark a significant improvement in forecasting winter storms and severe thunderstorms.

There are 155 WSR-88D Doppler radars in the United States, including the U.S. Territory of Guam and the Commonwealth of Puerto Rico. The National Weather Service or the Department of Defense operate most of the radars.

So the next time you look at those colorful weather maps on your TV screen, remember that the complex life-saving technology behind them belongs to Doppler radar.

For easy tomato peeling, place whole tomatoes in the freezer for a few hours. After they thaw, you can easily remove the skin.
More hints & tips