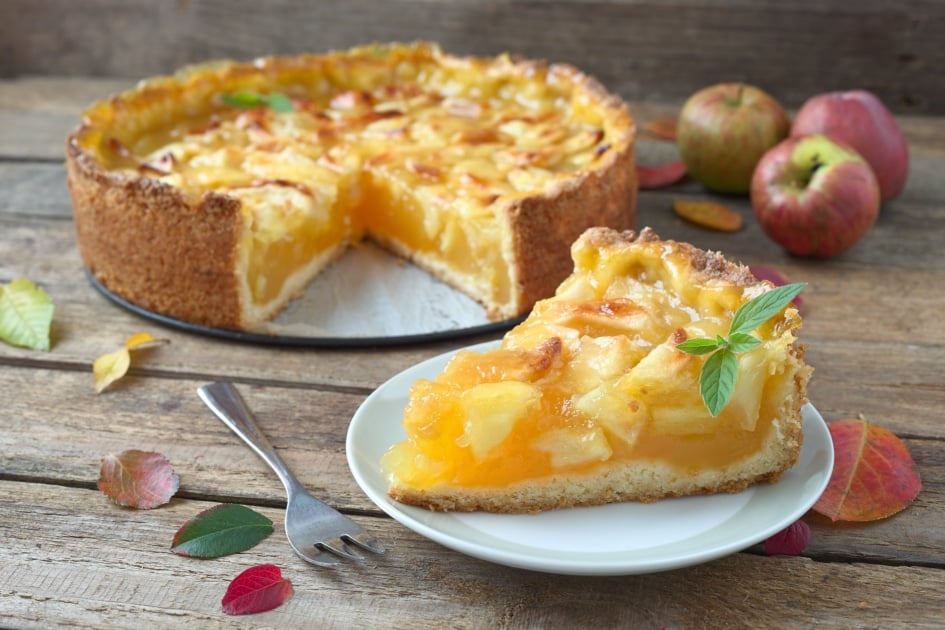 Kuchen (pronounced “koo-ken”) is the German word for “cake,” but a real kuchen is so much more than that! Traditional kuchen is like a delicious mash-up of cake and pie, topped with creamy custard. This dessert is very popular in Germany, and you’ll find that many communities in the United States carry on the tradition of cooking kuchens. In fact, kuchen is the official state dessert of South Dakota. So where did it come from? And how do you make it? Read on!

The Origins of Kuchen

It’s unclear exactly how long custard-topped kuchens have been around. However, we do know that kuchen is part of a 400-year-old “Kaffee and Kuchen” (or Coffee and Cake) tradition. This tradition is much like teatime in Great Britain – on Sundays, between 3:00 and 5:00 p.m., many Germans gather with friends and family to enjoy cakes, kuchens, and other confections, over a hot cup of coffee or tea.

How Kuchen Differs From Cake

You might think that cake is cake, no matter where in the world you happen to be eating it, but that just isn’t so! German cakes are quite a bit different from those we’re familiar with in the United States. In fact, German Chocolate Cake is actually an American invention, first made by a Texas woman in 1957, and named for a chocolatier by the name of Samuel German.

In general, true German cakes tend to have much less sugar and a bit more butter or shortening than the cakes we’re most familiar with. That’s why you’ll quite often see German deserts topped with fruit, streusel or whipped topping. When you eat a traditional kuchen, you’ll notice that the dough itself isn’t particularly sweet. Rather, it’s more like plain pastry dough – sometimes with extras like oats for more flavor and texture, or yeast to make it a bit puffier.

When it comes to kuchen toppings, anything goes. Peaches are among the most popular topping, but historically, kuchens were made with whatever fruit was abundant at the time. You’ll find recipes that include apples, plums, apricots, berries, figs and more. Custard is an optional topping – most recipes include it, but not all. Like the dough, you’ll find that the custard is simple and unsweetened, made with only egg yolks and cream or milk. 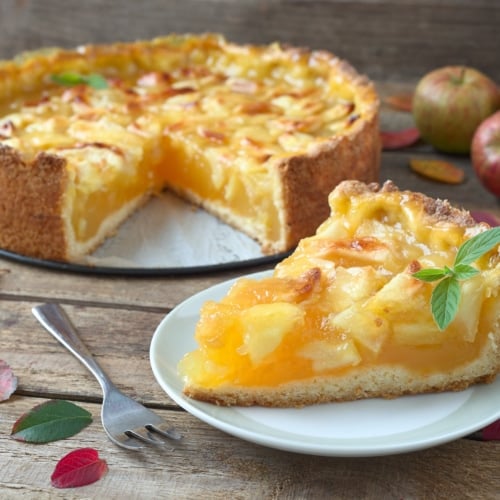 Keyword cinnamon peach kuchen, peach kuchen with sour cream
Tried this recipe?Let us know how it was!

Check out this recipe for Apple Kuchen!

I’m 80 years old and my German born (Leipzig) grandmother made the most wonderful kuchen, using whatever fruit was available I was looking for something else when I stumbled across this recipe. I think it made be close to her (unwritten) recipe and I can’t wait to try it.

We hope you enjoy it!

I used to go to a small family grocery in Minot North Dakota that made Kuchen at least once per week. It was very like homemade, and I have seldom had better. Old German families are a treasure for the community! They used a round pie pan, and the first time I thought I was buying a pie.

Last edited 3 months ago by William B Peckham
0
Reply

Beth
Reply to  William B Peckham

My grandmother made her kuchen round as well!

My mom, who was from Germany, made kuchen often when I was young. We kids loved it. When I grew older and mentioned kuchen to my friends they wanted to know what planet I was from. Glad I stumbled onto this site. I’ll try this.

Your friends have small minds…glad you woke them up.

I made this recipe and it does not look at all like the picture. It was good, but it looks like many of the other kuchen recipes that are online. In order to achieve this, I think I would need more custard, less crust and more peaches. Is this really a picture of the result some got making this recipe?

What you’re seeing in the picture is an apple kuchen, not a peach kuchen.

I have made and eaten Lebkuchen a lot. It was a traditional Christmas cookie treat. Made with candied fruit, but we never had custard on it just powdered sugar. Maybe that’s po-folks version.

I have a dairy allergy and love these recipes, my Grandma made them when I was a child. Any good suggestions for a substitute for the custard filling?

Jeannette, is your allergy to daily (milk) or also eggs? Because you can try coconut milk or Almond milk but you’d need the egg yolks. Be sure to use the non dairy milk in the crust portion of the recipe, as well.

In my family we sometimes made our custard topping with heavy cream and egg yolks but we would alternately use sour scream and egg yolks. I my problem is that I can never decide which I like best lol both are delicious. I use reduced fat sour cream. That cuts the calorie count a bit although I wouldn’t substitute low fat if it changed the taste. Thank goodness it tastes just as rich and satisfying

I forget what my original search online was for, but in that I came across this recipe/article and loved it. My sister has at her home in MA the Quince bush that was my grandmothers. When our Gram passed, sis dug up the bush and planted it in her landscaping. In the fall of 2015 the bush fruited for the FIRST TIME EVER….Gram never even saw fruit! We were thrilled for so many reasons and we know Gram somehow made it happen and was smiling at us 🙂 Sis and I gathered the fruit and began recipe searches. I made this Kuchen with the quine and it was fabulous! Thank you. I also made quince paste (membrillo?) What a great fruit. Thank you Amber for your recipe/article. Happy Cooking all xoxo

Hi Heidi i too grew up eatig quince or membrillo my granma would can it. Make butter, mmmm. Maybe you send me seeds and i can try sprouting. I live in San Diego Ca. We can grow year round here. This really warms my heart.

Hello there!
I stumbled upon this post and I liked it a lot!
I’m from Germany you know and I always wondered about the German Chocolate Cake which was topped with something that looked like coconut and pecans. But you can rarely find pecans here…and they’re very expensive, too. So thank you for the explanation. Finally I can stop wondering 🙂

I’d also agree with what Susan Wolter-Brown said: Kuchen [ˈkuːkən; ˈkuːxən] is any kind of cake. Also what you call pie or sweet bread. In this case there’s an addition to the name so you can see what kind of Kuchen it is.
And everything with a lot of cream in it (not Kuchen topped with whipped cream) I call “Torte”.

Many Regards to all of you!

I always imagined living on the farm, company just dropped in….always had cream, always had fruit even if it was prunes Yum!

I have had Apple Kuchen.. It was so good!!

Pumpkin kuchen sounds AMAZING — I’ve got to try it! 🙂

Momma used to love it with figs.

I’m from North Dakota and I make it with a delicious custard and it can be topped with anything including cottage cheese and prunes. I’ve also made pumpkin for the holiday! Yummy!

Will you please share your recipe for custard? Thank you so much!

Oh yes, I remember the season when plums were ripe and the German bakeries in Milwaukee made Plum Kuchen. I always looked forward to it.

Quoted from the article: “Peaches are among the most popular topping, but historically, kuchens were made with whatever fruit was abundant at the time. You’ll find recipes that include apples, plums, apricots, berries, figs and more.”

Mary Ann,oh yes you can use apples, or any other fruit. They are all tasty.

Can you use Apples in place of Peaches?

? Can you use apples in place of peaches?

In my German family Kuchen was any kind of cake. All of it works for me… 🙂

No room to dry things flat?

Use the bathtub! Place a thick towel on the tub bottom, lay your hand washables on it, and close the shower curtain. No one will see your laundry.
More hints & tips