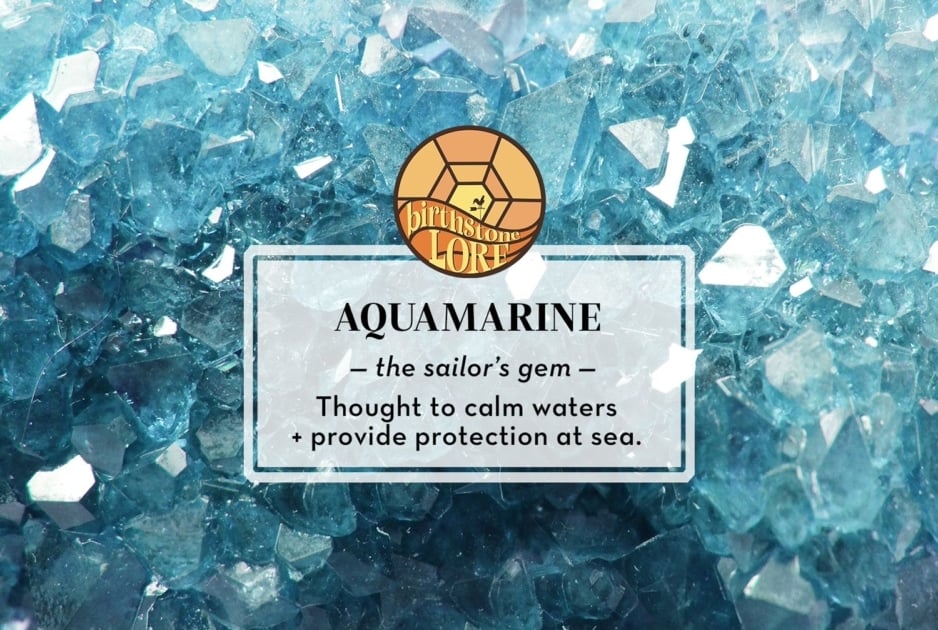 Aquamarine is the birthstone for March. Its name is Latin for “seawater,” which describes its blue-green color and relates to its ancient oceanic mythology. Coined by the ancient Greeks as “the sailor’s gem,” its presence on a ship was believed to appease the mighty sea god, Poseidon, who in turn would calm rough waters and provide safe passage for seafarers. Learn more facts and folklore about this beautiful birthstone. Keep reading.

Aquamarine is a type of beryl, the same mineral that forms other familiar stones: emerald (green), heliodor (yellow), and morganite (pink). Colorless in its pure form, beryl varies in color because of differing elements nearby. Aquamarine, for instance, is blue-green due to the iron present. Prized for their hardness (8 on the Mohs scale), beryl gems are durable and make long-lasting jewelry stones.

Aquamarine shades range from seafoam green to palest blue. In the 1800s, green varieties were most popular, but today, blue tones are more commonly desired. Typically, the more sky-blue the stone, the more valuable it will be. Lighter shades that most resemble diamonds are not as expensive.

An interesting trait about aquamarine is that, depending on the angle you are looking at it, its color may appear slightly differently. It may look green, blue, or colorless. This optical phenomenon is called “pleochroism.”

Most aquamarine comes from Brazil, but it can also be found in the United States: Maine, New Hampshire, and Connecticut; Pennsylvania, North Carolina, and Georgia; Wyoming, Idaho, and Colorado.

In ancient Egypt, aquamarine gems were used in amulets and placed in pharaohs’ tombs to help ensure safe passage into the afterlife, on a boat ride through the underworld. This may be the origin of its seafaring connotations for the ancient Greeks and Romans.

Egyptians also associated aquamarine with happiness in relationships, another belief which may have been relayed over time. In medieval times, people believed aquamarine had the ability to reawaken married couples’ love. Even to this day, this mythology rings true as aquamarine gems are traditionally gifted as 19th wedding anniversary presents. (It is sometimes also used as a substitute for a stone in a wedding engagement ring.)

Ancient Greeks and Romans believed that aquamarine had medicinal powers to cure ailments in the stomach (especially sea sickness) and the throat (aiding thyroid conditions and easing communication in difficult situations). Additionally, in the Middle Ages, aquamarine was believed to purify any liquid that it was dropped into. So, it became popular among royals who were concerned with being poisoned.

Some legends say that aquamarine:

The largest aquamarine gem is called the “Dom Pedro.” It was cut from a crystal mined in the 1980s which originally weighed 100 pounds. German lapidary artist Bernd Munsteiner carved it into an obelisk-shaped 10,363 carat jewel which currently resides in the Smithsonian National Museum of Natural History.

The record for the largest aquamarine gem was previously held by one weighing 1,298 carats—a gift from the Brazilian president to Eleanor Roosevelt upon Franklin D. Roosevelt’s visit to Brazil in 1936. The massive, dark blue, and rectangular stone was cut from a 3-pound piece of rough. Today, it is housed at the Franklin D. Roosevelt Presidential Library and Museum.

Lucky you if beautiful aquamarine is your March birthstone! Today everyone may enjoy this relatively affordable gem. Consider acquiring one for your jewelry collection—especially for that cruise you plan to go on this summer! Psst … don’t forget to check out our long-range forecasts when planning your next vacation!