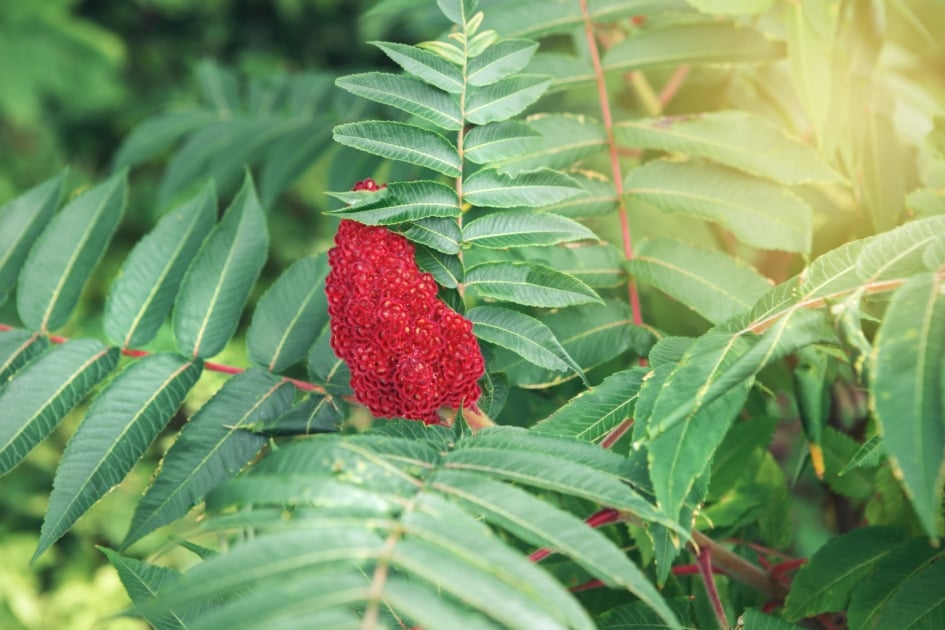 When most people think of “sumac,” they think of the itchy relative of poison ivy. Staghorn sumac, however, is an entirely different variety, and is both edible and delicious! Here are some of the ways people around the world use it, plus some instructions for harvesting, drying, and using it in a recipe!

Staghorn sumac, or Rhus typhina, is easily identified by the red fruit clusters resembling an Olympic torch, or the velvety antlers of a male deer (stag), hence the name of “staghorn.”

Sumac is very popular in both the Middle East and the Mediterranean. In places like Israel, Turkey, and Italy, people use dried, ground sumac as a flavoring and a color enhancer. These berries have a tart flavor that is reminiscent of lemons, but not as sour. In fact, before lemons were imported to Europe, the Romans used these berries to add a tangy taste to their meals. They are high in vitamins A, C, and antioxidants.

Today, many Middle Eastern cultures still prefer sumac to lemons or vinegar. People keep it in shakers on the table to season their favorite foods in much the same way that we use salt or pepper.

Sumac berries also have a long history as an herbal remedy. Early pioneers treated coughs, sore throats and fevers with sumac, while American Indians used these berries to treat anything from reproductive problems to stomachaches and wounds.

How to Harvest and Preserve Sumac

To find sumac, look along the edges of woods, roadways* and along banks and other non-wooded but unmaintained areas. Staghorn sumac trees are short – between five and 15 feet tall – and the branches have between 4 and 15 pairs of long, pointed leaves. The most prominent feature is the clusters of bright red berries that top the trees in the late summer and early fall.

To harvest the berries, simply cut the clusters, called “bobs” away from the trees. Roll a couple of the velvety berries between your fingers and then give your finger a lick – you’ll taste the tartness! You can use the berries as they are, or you can dry them for use throughout the winter. If you choose to dry them, dry the entire cluster with a dehydrator or under heat lamps overnight. Ovens usually can’t heat low enough to dry them gently (125º-150º). Once dry, use a blender to separate the dried berries from the seeds and sticks. Then you’ll be able to sift the sumac powder through a fine mesh strainer for later use.

Ground, dried sumac berries taste great as a spice rub for lamb, fish and chicken. These berries are also used as a salad topping, and you can include them in your favorite dressings. Middle Eastern chefs use sumac as a topping for fattoush salad, and are often sprinkled on hummus to add both color and a zesty flavor. In the United States, one of the most common ways to use sumac is to make red lemonade. Some even call it the “Lemonade Tree.” Give it a try! 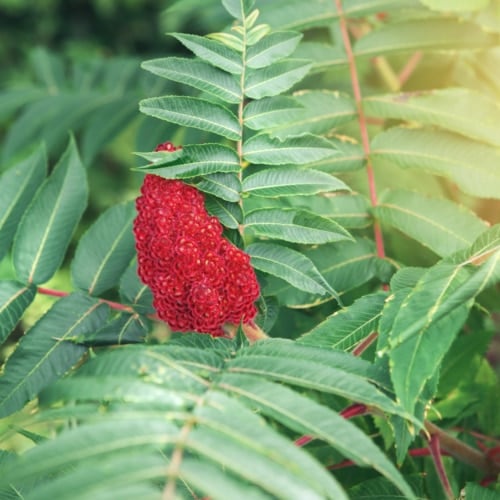 *Notes: You may want to avoid consuming Sumac that grows close to roadways because of its exposure to car fumes and toxins.

I picked some last weekend and the outside berries are red but the interior of the cluster is brownish with what looks like little cobwebs and brownish berries. Are the red ones okay to use and discard the interior ones, or give the rest to my chickens or should I discard it all? I live in the lower South, zone 8.

I moved to the house I’m in a little over a year ago and kept wondering what these red berries were. I’ve got these sumac trees growing wild all over one side of my property. I grabbed one of these off the tree and tasted a berry. Definitely Sumac! My late husband was from Amman and we have always kept a large jar of this for fattoush salad or for sprinkling over roasted cauliflour (my favorite use). How exciting for me as the sumac I generally find at the Arabic store is not fresh. I’ll be harvesting and drying these for sure. Thanks for the information.

I just bought a Staghorn Sumac tree online, I hope it will grow here in Southern Nevada , it’s a zone 8 tree so it should since it likes clay soil and tough areas. Just worried if it can take the heat?
I mostly got it for my chickens and local Quail, but I sure am going to try the lemonade.

I have several here in east alton Illinois about 20 miles north of st louis, they grow fantastic and are semi tropical. They thrive in the sun and hot weather. Mine are about 6 years old and about 10-15 feet tall with droopy branches. Mine also just ripened the berries so it’s time for tea! Also note these will pop up everywhere I mean 30- 40 at a time they root about ten inches deep and grow like crazy, they xan be contained by placing a thin metal ring about 6-8″ tall about 8-12″ down and about 3-4′ around the base. In winter all minor limbs will break off and all foliage s well but they always come back in the spring.

Sumac it’s an Arabic word سماق. The origin of this spice was from the Levantine area, Turkey and the rest of the Med took it with them to use in their dishes when they invaded the Middle East. It’s used in many delicious dishes and taste little sour and does not stain the hands or the mouth.

I LOVE sumac and bought some home in 2020 when I was in Amman. My question is, do you know if it can stain your hands and/or teeth and if so what to do about that. I noticed some black stains around my nails after cooking with sumac. Could be just coincidental but wondering if anyone has more experience than I do. thanks.

I never thought that Sumac berries are edible. Thanks for the article.

Just the red ones

We have smooth sumac in central Illinois. It provides beautiful leaves and some fruit. Is it OK to use?

I really enjoyed reading about sumac. Always heard they were poison. Thank you I will try them this summer..

Thanks for the helpful article

What is the best time to gather sumac? How do you know when it is ready? Last year I waited too long and it had lost some flavor. Thanks from Sicily!

Soon as they turn dark red

Thanks for the helpful article, Amber!

Drying the berries and sifting them through a fine sieve, not a flour sifter, gives a good supply of seasoning sumac. Use the “too large to sift” remaining seed hulls to store in a tea tin for future tea or lemonade.

Will it grow in the Northern California mountains?

Hi Stevens, it appears that it does grow in California: https://www.kcet.org/home-garden/8-ways-to-use-california-sumac-for-the-holidays

how can i use the berries already dried on the tree in oct.?

Hi Ronald, the red berries on the tree are pretty dry. They are not plump like other berries. They’ll crumble to dust between your fingers. They may turn brown, but the under berries may still be red. Make sure the berries ARE red, not white. VERY important. White berries are poisonous. And do not forage berries that grow along the side of the road as they are full of contaminants from car exhaust.

It has a relative in my region, Rhus trilobata. I grind the berries and use them on all sorts of Middle Eastern-type dishes, great on yoghurt. Also, I make a wild seed cracker and I use these and Monarda (wild bergamot, oswego tea) to flavor them

I wonder if it grows in southern Mississippi/Louisiana?

My father grew up in Missouri and Summered in Kansas on his grandfather’s farm. As kids they enjoyed makng this pink lemonade! You provided the key of crushing the berries, a detail my father forgot.

Carroll: Sumac does grow in Florida! The variety that does best in your climate would be “winged sumac” or Rhus copallina.

I’ve been using Summac on my food since “discovering” it while visiting my daughter in Dubai in 2008. It is a great addition to your condiments, I only have dried, powdered Summac, but I think I’ll try to grow a bush to get a fresh berry supply and try recipes using it.

Thank you soooo much! I’ve been reading about sumac but this website is the first to clearly identify how to use the plant and proper drying procedures. I will make a cough syrup from it for the winter

Does it grow in mid Florida. We are tropical.

Is it available in Melbourne?

It is a semi tropical plant

It does grow wild in Canada & spreads like crazy! My sister sent me a recipe for Sumac Jelly, I will go pick some sumac from the back 40 & try it

Got a bug bite that itches? Soak a cotton pad in Witch Hazel and apply to the bug bite. Wait a few minutes and the itch will be gone!
More hints & tips 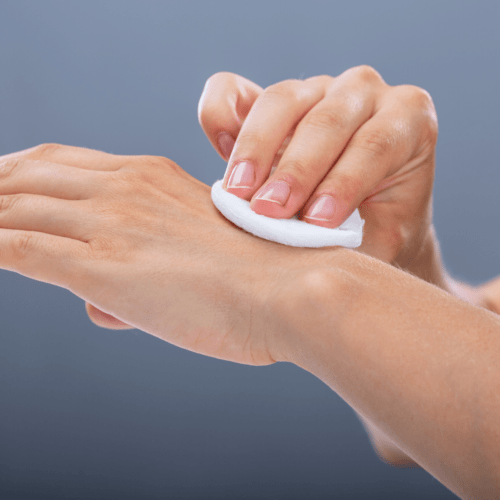