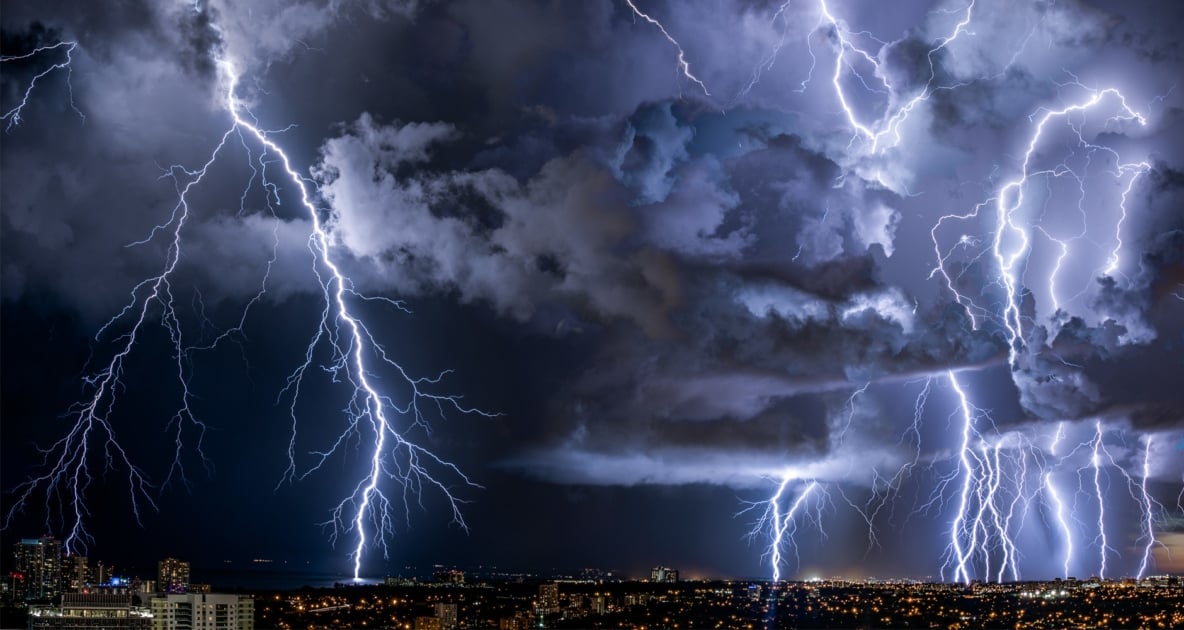 While they can be scary and dangerous, there are many of us out there who can’t help the fact that we love to watch a good thunderstorm. When we know one is coming, we look forward to the show. We often hear from our readers that some of their fondest memories include watching a thunderstorm on the porch at grandma’s on a hot July afternoon. There’s something to be said for Mother Nature, who can elicit nostalgia even from her most ferocious events.

Throughout the United States, there are many great places to watch the black clouds, pouring rain and lightning roll in. If you’re looking for great storm-watching, these 5 hotspots are considered some of the best in the world! Just remember to play it safe. If you’re caught in the open, head for shelter or a vehicle as soon as possible. Check out these lightning safety tips here. Better yet, find lodging with a great view so that you can watch nature’s fury without putting yourself in danger.

5. Kansas
Because it’s situated in the heart of Tornado Alley, Kansas offers some of the best storm watching opportunities in the United States. According to the National Oceanic and Atmospheric Administration, Kansas experiences approximately 50 thunderstorms per year, many of which happen in June and July. The great thing about Kansas is that the wide-open spaces let you watch as storms develop miles away from your storm-watching spot.

4. Arizona
People that aren’t from Arizona often assume that the weather is dry and relatively calm, and in some regions of this state, that’s true. However, Arizona also has a few thunderstorm hotspots. Chief among them are the Huachuca Mountains in southeast Arizona. Throughout the month of July, these mountains experience a thunderstorm every day – sometimes twice per day!

Fifty miles to the north, the city of Tucson averages 20 thunderstorms in July. Book a room in a high-rise motel with plenty of windows so you can catch a glimpse. You can also visit nearby Mt. Lemmon, which offers a wonderful – if unsheltered – view of Tucson’s storms.

3. Texas Panhandle and Western Oklahoma
Everything is larger in Texas, and that includes the thunderstorms, particularly in the Panhandle region and western Oklahoma. As a Texan might say, “when it rains, it ain’t kiddin’ around!” The sky turns pitch black as rain pounds the ground. The thunderstorms in this region are often accompanied by extreme high winds, large hail and tornadoes.

In the eastern half of the Panhandle, your best chances of catching a storm are in June. If you’re visiting the northwestern corner of the Panhandle or western Oklahoma, you’re more likely to see a good storm in July.

2. Colorado
Colorado has extremely volatile weather patterns, which makes for some of the best storm watching in the world. On a clear day, a furious storm can develop in minutes. Book a lodge in the Rockies during August for an excellent view of lighting striking the mountains.

For even better storm watching opportunities, visit eastern Colorado. Although this region is relatively flat, the mountains to the west have a strong influence over the weather in the eastern half of the state. Cold air masses from the north sometimes clash with tropical air from the south, which results in some spectacular storms. Because of the area’s turbulence, you’re likely to see sudden high wind events and flash flooding in addition to ferocious thunderstorms. Eastern Colorado’s storm season peaks in July, so if you plan a trip for the end of July and the first part of August, you can watch storms in both the eastern portion of the state and in the Rockies.

1. Florida
You’d think that the number one best spot to watch storms in the United States would be somewhere in Tornado Alley, but it’s actually Florida, the state known for its balmy weather and sun-kissed beaches. Some areas in Florida, however, see as many as 100 thunderstorms per year, which means that on any given day, you have a one in four chance of catching a good storm. And, depending where you choose to stay, there’s a great chance that you’ll be able to watch storms moving in from the ocean, which means ample opportunities to catch a glimpse of lightning striking the water.

What about your favorite spots for watching a storm? Share with us in the comments below.

If you ever want to see something totally wicked. Take a trip up to Northeast Wyoming. It was in Sheridan-in the Bighorn Mountain Range. There is a visitor’s parking area off Interstate 90, 5th Street exit. It sits above the City. Be there in June or July if you want to see a spectacular show. First, you get watch lightning bolts as they march in across the mountains from North to the South. Then if look real close, you will see the rain approaching as a Wall of Water. If that isn’t enough, there is the Wind. And everything is coming toward you and everyone else parked up there on its way to South Dakota. Make sure you are in a vehicle with your windows up, unless you enjoy getting drenched to look like a drowning Water Rat. Ah, the memories. They will be with you forever.

I love to watch the lightning, one evening a few years ago I took a bike ride when there lightning way off in the distance, but the farther from home I got it more active so I turned around about 2 1/2 miles and headed back and just minutes after I got home it really let loose, after that if there was even a flash of lightning I stayed home where I could be safe and dry.

My first real experience of a good thunderstorm was on a family vacation, we were driving around 1p.m. it turn black as night we were in Iowa. My dad was from tbere, so he knew of a high hilly spot in the road. We stopped and told a few people to follow us to the hill I remember. That started my love for thunderstorms, Las Vegas, Phoenix, Twentynine Plams, CA, Mid-Michigan has some beautiful thunderstorms also. I must admit alsowith a nice roof the rain hitting it I can go to sleep evsry time. If not I can sit up and take pictures all night long.

Once, in May 2008, my husband and I saw the most awe-inspiring lightning storm of our lives in St. Louis. We were adjacent to the Cardinals Stadium in a hotel with floor to ceiling glass windows. We were on a high floor in our room, having come back from dinner late at night. It was magnificent. The lightning was near constant, sometimes pink, and thunder and rain were plentiful. What a great memory.

Rhianonm: Wonderful! Thank you for sharing!

I love living in Florida! Sumner T-storms are the best! Check out my instagram @cloudstalker

If you want to see some powerful thunderstorms with multiple lightening strikes, the place to go is Rockford or Loves Park Illinois especially close to the Rock River or near the Sinnissippi Gardens!

My favorite place to watch a TS from is bed, be it in Ohio, Missouri, Arkansas, or where ever. Then I can devote full attention to it & feel comfy in my place. The sound of the rain helps, especially if you hear it hitting tin/metal like a gutter or roof. Only problem is they lull me off to sleep! ~~~zzzZZZ

I live in north eastern Arizona in the White Mountains. During our monsoon season from late June till early Sept we sit and watch the lightning travel across the sky and listen to the thunder pop, crack, and roll for what seems like forever then it pours. It is awesome and sometimes scary!

I’m looking to retire in a place that has great Thunderstorms.. what city in AZ do u live?

All of the above mentioned place are probably good, but, the shores of any one of our Great Lakes are fabulous places to watch thunderstorms roll in!!

Amen! I grew up staying in Petoskey, Michigan and loved watching those storms rolling in. The thunder and lightning were definitely plentiful! Since we were in our camper the sound was awesome and would send me to sleep. lol They lasted hours. Ahh so beautiful and relaxing.

Your headline photo reminds me of Tampa Bay, looking across from St. Petersburg Beaches. Spectacular. Best storms ever!
I didn’t notice from where the photo is taken. Let us know!
Christie W.

Hi Christie Wight, that photo is actually a stock image. It is spectacular!

US Government LIghtning Research Center is in Starke, Florida, in the Tampa/Lakeland/Orlando/Gainesville area.

They put it where the most lightning occurs.

Here in West Central Fl, North of Tampa, we have had some doozies these past two weeks! Jennifer Pocius is right, when it storms, it RAINS!!!!! Sometimes it rains so hard, I have been stuck in my car in the parking lot until it lets up enough to run inside!

A really good place to watch lightning is where I live in Lubbock Texas. We can have some really intense and scary storms here. Anywhere from March to October.

We love to go to our town’s private beach on the north shore of Long Island which is right on Long Island Sound. The squalls and thunderstorms blow up and bring black, roiling clouds, and lightning – which usually stay mid-Sound or across the Sound in Connecticut 6 miles away from us. Great shows!

We ve had thunderstorms & rain all month May in Texas, l live in central Tx, Cross Plains…seen terrific & frightening storms right out in my open acres! Plz Pray for our floods victims & families of our lost!

You are correct. I have had dinner up in the Signature Room (restaurant). The storms are quite an experience from the Hancock Center in downtown Chicago.

I was just standing in the back yard of my mother’s home in Orlando one sunny morning talking to the neighbor, and a burst of thunder with lightening happened right out of the sky. The sky was blue and cumulus clouds were around. It scared the heck out of me and I immediately went inside. So YES Florida is a good place to see a thunderstorm. And when a storm blows thru—it RAINS.

I do love a good thunderstorm it just makes me think how awesome are God is and how little I am ! ! ! !

One of the most unique places for thunderstorm viewing is from the The Signature Room (Restaurant) at the 95th Floor of the John Hancock Center in Chicago. If you time it right, you can have a fine dining experience with a thunderstorm raging all around you, then clearing and unlimited viability. You are sitting inside the clouds as the lightening bounces around.